U.S. Businesses Warn: The Trade War Is About To Have “Noticeable Effects” On The Economy 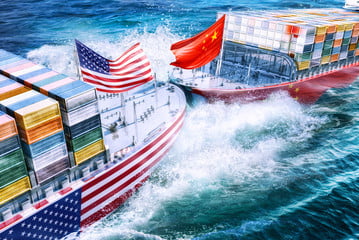 As if the American consumer and U.S.-based businesses haven’t taken the tariffs on the chin already, many business groups are warning that more tariffs will only make the problems in the economy much more noticeable.  With 78% of Americans living paycheck to paycheck, the consumer cannot really afford more pricing increases.

Companies say they have weathered the increases so far thanks to careful planning, but are running out of room to maneuver at the same time that President Trump has threatened to escalate the fight by placing new tariffs of up to 25% on $300 billion worth of goods, according to a report by the Washington Examiner. Businesses are simply running out of wiggle room now. Business owners say that some of the effects of the tariffs have been mitigated so far through careful planning methods such as shifting to suppliers outside China, building up inventory by purchasing goods ahead of when the tariffs would go into effect, and cutting costs. But now, those same businesses who prepared have reached the limits of what they can do in those areas.

That means this trade war could hit your wallet even harder in the coming months.

Financial Experts Warn: Americans WILL Pay The Cost Of A Trade War

“While we have shifted some imports to manufacturers in other countries over the past year, there simply is not the infrastructure to manufacture the volume and quality of items we require other than China,” said Wade Miquelon, president of Jo-Ann Stores, an Ohio-based fabric chain. “Due to the lack of alternate sources, we have no option but to continue to import items from China.” Which means the tariff tax is going to be levied on the American consumer falling on their backs at a time when the economy is on thin ice and most don’t have the disposable income available to pay for the taxes.

“We will have no choice but to absorb the costs of the tariffs and therefore reduce the profits of our company or pass the costs along to the consumer,” said Jay Foreman, president of Basic Fun!, a Florida-based toy company according to the Washington Examiner. “If we get 10% tariffs, we’ll have to reduce our headcount by 10%. If it’s 25% tariffs, then the headcount is reduced by 25%. The money has to come from somewhere.”

A survey released Wednesday by Tariffs Hurt the Heartland, an ad-hoc coalition of businesses calling for an end to the trade war, found that American businesses and consumers paid a combined $6 billion in tariffs in June 2019, up from $3.5 billion the last year. About 75% of the increase came from the tariffs on Chinese products, which currently cover just $250 billion worth of goods. The next round of tariffs set to go into effect in September will cover $300 billion worth of goods. –Washington Examiner

“While we were lucky enough to get our products removed from the previous list they were put back on in the fourth one, so we are now subject to 10% tariffs in September,” said Win Cramer, the chief executive officer of California-based JLab Audio, a technology company. He said he will have to lay off workers or charge higher prices to compensate.

This is basic economics.  The charges will always be passed on to the end-user. But in the U.S., there’s so much partisanship with voters putting on political blinders that they won’t notice the damage until products cost more than their unemployment check allows them to spend.

The White House has disputed that tariffs have a negative effect on the economy. Officials have pointed to the economy remaining strong as proof. “These same groups said the same kinds of things when the tariffs began. We’re just not seeing it,” White House trade policy adviser Peter Navarro told Fox News Sunday. But if the economy is so strong, why was a rate cut needed? Why is the retail sector collapsing before our eyes and why are Americans putting basic necessities like food or rent on their credit cards?

It sure doesn’t look like this economy is booming if one takes the time to simply scratch the surface.

That the White House is attempting to say that the reason things haven’t crumbled just yet is a result of the efforts businesses have put into compensating for the tariffs, said Daniel Ujczo, a trade policy lawyer with the firm Dickinson Wright. “I don’t think they [The White House] fully appreciate why companies were able to swallow the tariffs,” Ujczo said. “At this time last year when the tariffs first started to come on, what did most companies do? The overwhelming majority bought around the tariffs. They bought huge inventories. Those inventories are out and companies are now forced to buy items with tariffs when they have been for the last year.”