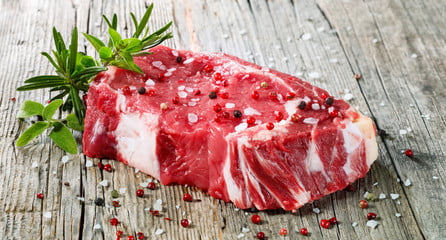 Newsfeeds in April have been inundated with food supply chain disruption stories due to coronavirus-related shutdowns. At least a third of US meatpacking facilities handling hogs have shifted offline this month, other plants that process cows and chickens have also shuttered operations, forcing farmers to cull herds and flocks.

This is because each plant closure diminishes the ability for a farmer to sell animals at the market, leaves them with overcapacity issues similar to the turmoil facing the oil industry. Only unlike oil where pumped oil must be stored somewhere (as one can’t just dump it in the nearest river) even if that ends up costing producers money as we saw last Monday when oil prices turned negative for the first time ever, food producers have a simpler option: just killing their livestock.

We previously explained what this imbalance has created: crashing live cattle spot prices while finished meat prices are soaring, which doesn’t just affect farmers but also consumers simultaneously and could spark a shortage of meat at grocery stores as soon as the first week of May.

And in the starkest warning yet that high food prices could last for a long time, Tyson Foods warned in a full-page ad  in the New York Times on Sunday that the “food supply chain is breaking.”

“As pork, beef and chicken plants are being forced to close, even for short periods of time, millions of pounds of meat will disappear from the supply chain,” wrote Tyson Chairman John Tyson, patriarch of the company’s founding family, in a Tyson Foods website post that also ran as a full-page ad in several newspapers. “The food supply chain is breaking.”

Confirming the worst fears of American pork and bacon consumers, Tyson wrote that the company has been forced to close plants, and that federal, state, and local government officials needed to coordinate to allow plants to operate safely, “without fear, panic or worry” among employees. He warned that supply shortages of its products will be seen at grocery stores, as at least a dozen major meatpacking plants close operations for virus-related issues.

Last week, Smithfield Foods, one of the top pork producers in the world, closed another operation in Illinois. That news came directly after Hormel Foods closed two of its Jennie-O turkey plants in Minnesota. Then it was reported over the weekend that major poultry plants across Maryland, Delaware, and Virginia had reduced hours because of worker shortages due to virus issues. And then on Sunday, JBS USA closed a large beef production facility in Wisconsin.

“During this pandemic, our entire industry is faced with an impossible choice: continue to operate to sustain our nation’s food supply or shutter in an attempt to entirely insulate our employees from risk,” Smithfield said in a statement Friday. “It’s an awful choice; it’s not one we wish on anyone.”

Even before the Tyson warnings, last week we cautioned that it was appropriate to label virus outbreaks at meatpacking plants as the “next disaster zones” of the pandemic. This wasn’t just because of workers and USDA inspectors were contracting the virus, and in some cases dying – but because food shortages could also add to social instabilities during a pandemic and economic crisis.

The distress in the agricultural space has not been limited to just livestock. Dairy and produce farmers have had to dump or throw out spoiled products due to a collapse in demand for bulk products, mostly because of shifting supply chains with the closure of restaurants, cruise ships, hotels, resorts, education systems, and anyone else who is not deemed essential in a lockdown.

What this means is that farmers who generally sell bulk products do not have the means at the moment to convert product lines into individual items for direct to consumer selling. This will take time for the conversion. So, in the meantime, with no customers, farmers have to dump.

Politico has outlined some of this disruption:

“Images of farmers destroying tomatoes, piling up squash, burying onions and dumping milk shocked many Americans who remain fearful of supply shortages. At the same time, people who recently lost their jobs lined up for miles outside some food banks, raising questions about why there has been no coordinated response at the federal level to get the surplus of perishable food to more people in need, even as commodity groups, state leaders and lawmakers repeatedly urged the Agriculture Department to step in.”

Tom Vilsack, who served as agriculture secretary during the Obama administration, put it this way: “It’s not a lack of food, it’s that the food is in one place and the demand is somewhere else and they haven’t been able to connect the dots. You’ve got to galvanize people.”

The immediate outcome of this food supply chain collapse will be even more rapid food inflation, hitting Americans at a time of unprecedented economic hardships with at least 26.5 million now unemployed since the pandemic struck the US.

And with a sharp economic recession, if not outright depression unfolding, more Americans are ditching grocery stores for food banks, putting incredible stress on these charities, which has forced the government to deploy National Guard troops at many locations to ensure food security to the neediest.

EDITOR’S NOTE: Please remember that the food supply chain is being affected because the mainstream media intentionally panicked the masses, and used fear to force compliance with the commands of tyrants. If human beings had been smart enough to take a stand and refuse to be controlled when this started we’d all be much better off.  Most of humanity’s tragedies (and this one is no different) are the result of following orders.

In the book, Most Dangerous Superstition

by Larken Rose, it is explained in detail why following orders is not the way a free people ought to act. The primary threat to freedom and justice is not greed, or hatred, or any of the other emotions or human flaws usually blamed for such things. Instead, it is one ubiquitous superstition that infects the minds of people of all races, religions, and nationalities, which deceives decent, well-intentioned people into supporting and advocating violence and oppression. Even without making human beings one bit more wise or virtuous, removing that one superstition would remove the vast majority of injustice and suffering from the world.

Spoiler alert: the most dangerous superstition is “authority” and those who follow its commands.