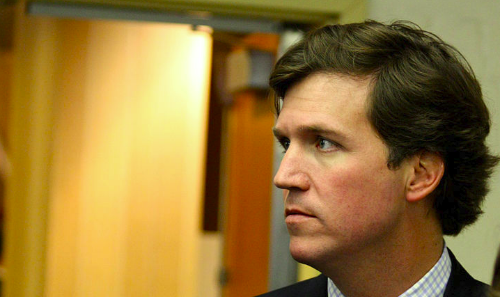 They are all in on it.  The mainstream media and the government are all working together regardless of which side they say they are on. They are on one side, we are on the other.  Even conservative “hero” Tucker Carlson has said the COVID-19 “vaccines” have “profound benefits.”

Donald Trump started the “vaccine” push with his Operation Warp Speed and just simply pointing out that fact will still get those stuck in the left vs. right paradigm lie riled up. Trump also praised the “vaccines” saying he would recommend everyone take the shot.

Carlson added to the propaganda by saying: “There may well be profound benefits to the vaccine.” Carlson made that statement on his Monday night broadcast. “My understanding is that the vaccine does have benefits.”

“It seems to various vaccines seem to lower the effects of the disease, make it less severe on people,” he continued. “They’re less likely to go to the hospital to take for taking that. That completely makes sense.” But is Carlson only doing the bidding of his puppet masters? It appears so because according to Newsweek, Carlson’s comments came after a July 16 study from the media watchdog group Media Matters which found that 60 percent of Fox News’ vaccination segments over a recent two-week period pushed “anti-vaccine propaganda.”

It’s simply the illusion of choice. We know what side all mainstream media falls on and it isn’t our side.  They are dividing us in order to more easily conquer us. It’s a game to these psychopaths and it’s rigged. The only way to win is to refuse to play or cheer for any side.

In an April 13 broadcast, Carlson called the vaccines “a massive achievement” and “something all Americans can be proud of.” That was likely to align himself with Donald Trump’s Operation Warp Speed and show he’s a piece of the system.

“We haven’t been, nor are we against vaccines, of course,” Carlson said in response. “Very few Americans are against vaccines. Virtually every American has had a ton of vaccines and was expecting to take this one.” –Newsweek

Carlson is only doing what he’s expected to do.  If he steps out of line, the show would be cut off and more dramatic measures would be taken. We know that the media is not telling us the truth and that they are there to divide us along whatever lines they can. Carlson is a member of that group and because of it, should not be trusted any more than we trust the talking heads at CNN. Like politics, no one gets into a position of power or persuasion unless they are willing to do what their masters ask of them.