Truthers and Terrorists: Questioning 9/11 Is Becoming An Increasingly Dangerous Use of Free Speech

Editor’s Note: Regardless of your views on 9/11, the following alarming report from The Intel Hub is clear evidence that our rights to free and independent thought are being sacrificed on the alter of security. Yesterday, your eccentric musings rendered you mentally incompetent and unable to safely possess firearms. Today, your questioning of the official 9/11 report may identify you as a potential sleeper agent and member of a domestic terror organization. What will tomorrow bring?

If recent history is any guide, criticism of official government policy, statistics and anti-Statist ideologies will deem you, your family, friends and social network communities as threats to national security.

Day-by-day, without pause or so much as a peep from the majority of our countrymen, the very fabric of American greatness is being eroded.

In the last few weeks the FBI, in conjunction with the Department of Homeland Security and the Department of Justice, have sent out 25 flyers that label normal everyday activities as possible terrorist indicators.

These flyers also specifically target political speech and the belief that the CIA and others had a part in 9/11 in order to justify, among other things, multiple foreign wars.

That’s right, our government is teaching state and local law enforcement nationwide that 9/11 truthers should be immediately looked at as possible terrorists.

In an FBI, Bureau of Justice document on spotting potential sleeper cells within the United States it specifically states that someone may be a terrorist sleeper agent if they believe that the CIA had a hand in 9/11. (A fact that has been heavily documented by thousands of experts. Rogue elements does not mean the entire CIA) 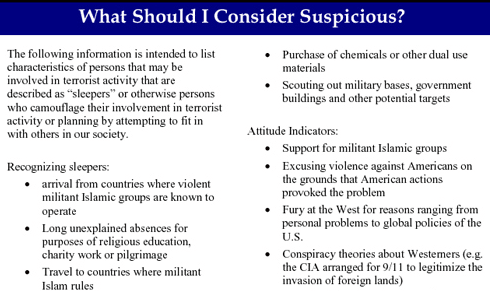 Late last week Intel Hub contributing writer Madison Ruppert wrote an extensive article that highlighted the details of all the 25 flyers that were sent out.

The Federal Bureau of Investigation (FBI) has routinely released their “Communities Against Terrorism” advisories in the form of fliers which encourage the public to report suspicious activity, something which the DHS has heavily promoted under their “See Something, Say Something” citizen spying program.

Through releasing these fliers, the FBI has effectively made most activities possible indicators of terrorism. Many of these are so innocuous it is almost laughable to think of them as hints of terrorist activity.

These are intended to make the people of the United States live in a constant state of fear, constantly on the lookout for non-existent terrorists lurking behind every corner.

This also helps create a culture of citizen spying in which neighbors are reporting each other for what would otherwise never be considered noteworthy activities.

Thus, it makes it much easier for the government to track down supposed dissidents since just about everything they do is likely to be considered suspicious when applying all of the absurd guidelines promoted by the FBI.

Although all the supposed possible terrorists indicators are absolutely absurd, the fact that the FBI chose to specifically target 9/11 truthers shows how important, even after ten years, covering up the truth of the horrendous 9/11 attacks is to the powers that be.

In August 2011 a video report from media outlet Russia Today highlighted a bill introduced in Congress that would allow indefinite detention of any American that the government declares a terrorist or terrorists sympathizer. (which we now have with NDAA)

The report specifically spoke about the possibility of 9/11 truthers being locked up throughout the country and now, with an FBI flyer specifically stating this very thing, questioning 9/11 is becoming an increasingly dangerous use of free speech.