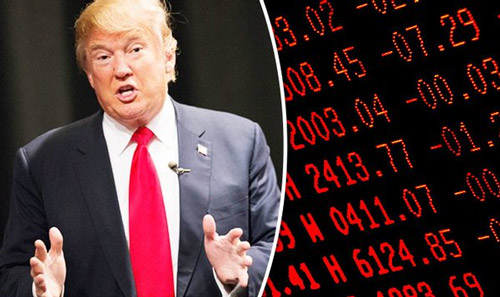 It is hardly a secret that few things could help Trump’s presidential campaign as much as a stock market crash.

As we reported back in January, while Wall Street typically worries about how politics might affect the market, Presidential candidates worry about how the stock market might affect their political outcomes. The reason for this is that historically, the market performance in the three months leading up to a Presidential Election has displayed an uncanny ability to forecast who will win the White House… the incumbent party or the challenger. Since 1928, there have been 22 Presidential Elections. In 14 of them, the S&P 500 climbed during the three months preceding election day. The incumbent President or party won in 12 of those 14 instances. However, in 7 of the 8 elections where the S&P 500 fell over that three month period, the incumbent party lost. 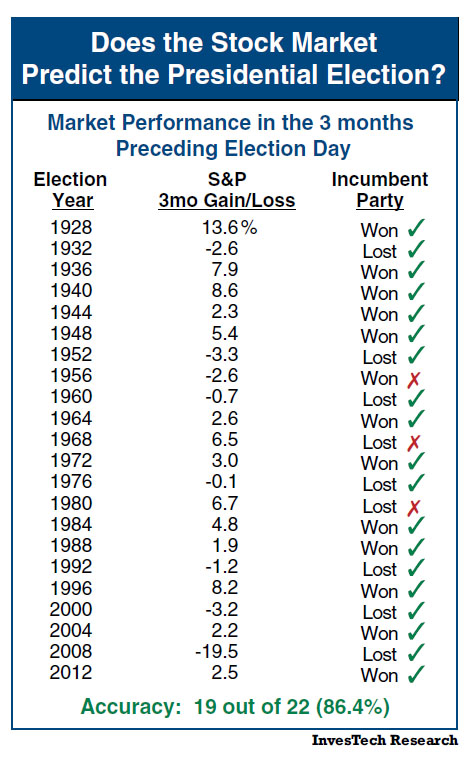 There are only three exceptions to this correlation: 1956, 1968, and 1980. Statistically, the market has an 86.4% success rate in forecasting the election!

A simple explanation for this relationship is because the stock market reflects, at least in theory, the economic outlook in the weeks leading up to the election; in practice – now that central banks push up the market the worse the global economy gets – it is the opposite, but a rising stock market certainly does miracles to one’s sense of financial net worth, and an unwillingness to deviate from the status quo. Clearly, a rising stock market indicates an “improving economy”, something Obama has pointed out so many times in the past several years, which means rising confidence and increases the chances of the incumbent party’s re-election.

Therefore, as we said in January, one’s time might be better spent from August through October watching the stock market rather than the debates if you want to know who will be President for the next four years.

Well, we are now almost exactly three months away from the November 8 election, and if Trump wants to really boost his chances, a market crash right now would be certainly most welcome by his campaign.

That may be why Trump on Tuesday urged his supporters holding 401-(k) to get out of equities as interest rates set by the Federal Reserve are inflating the stock market.

“I did invest and I got out, and it was actually very good timing,” the Republican presidential nominee said in a phone interview with Fox Business. “But I’ve never been a big investor in the stock market.” “Interest rates are artificially low,” Trump said. “The only reason the stock market is where it is is because you get free money.”

Trump also warned of “very scary scenarios” ahead for investors.

To be sure, Trump’s previous commentary on a stock market bubble has not won him many fans at the Fed, and certainly not Janet Yellen, whom he said back in May, he would “most likely” replace. Amusingly, Yellen has repeatedly said the Fed intends to raise interest rates gradually, as volatility and sudden drops in jobs and GDP, have delayed such plans. As a result, many have also said that a Fed rate hike before the presidential election is out of the question.

In an amusing tangent, Bloomberg here notes that “Republican and Democratic administrations alike typically don’t comment on the Fed’s monetary policy, out of respect for the central bank’s independence.” We can only assume that Bloomberg does not refer to the Fed’s “independence” from Goldman Sachs, which numerous civil and criminal cases have shown is not the case, the same Goldman which just happens to be one of Hillary’s biggest fans.

And an amusing paradox emerges when considering that none other than both Jeff Gundlach and, as of Sunday night, Goldman Sachs both urged investors to sell equities. One wonders if just like Trump was accused of being a Putin spy for diverging from the mainstream anti-Russia narrative, accusations will now emerge that he is also a Goldman double agent, seeking to crash the market just so Goldman can load up on the cheap.