Trump Signs Executive Order On Regulation: “For Every New Regulation, Two Regulations Must Be Revoked” 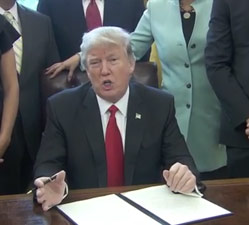 The order sets a budget of $0 for new regulations in 2017 and the administration will set a regulation budget each year, the official said on customary condition of anonymity. Military and national security regulations are exempt.

“This will be the biggest such act that our country has ever seen. There will be regulation, there will be control, but it will be normalized control,” Trump said as he signed the order in the Oval Office, surrounded by a group of small business owners.

Trump’s latest executive action will prepare a process for the White House to set an annual cap on the cost of new regulations, a senior official told reporters ahead of the signing. For the rest of fiscal 2017, that cap on new regulations would be $0, the official said on customary condition of anonymity.

Trump signs new executive order: “We have to knock out two regulations for every new regulation” https://t.co/d1RGYmgCzB

Some details from Reuters:

It was not immediately clear if this executive directive is in addition to the previously reported one on H1-B and foreign worker labor certification.