Trump: “Hillary’s Bodyguards Should Drop All Weapons. Let’s See What Happens To Her” 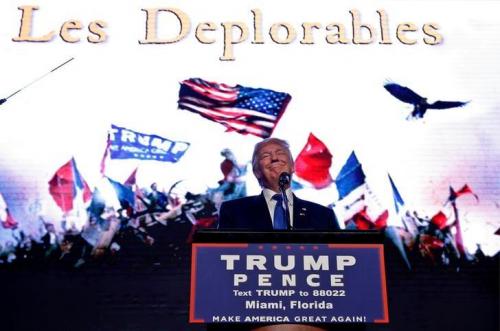 After he created a media furore when he “rickrolled” the media as part of his “birtherism” statement, Donald Trump had some more at Hillary’s expense, when on Friday night in Miami, he out-did his dramatic entrance at the RNC (where he entered the stage through a cloud of fog to Queen’s “We are the champions”) after his campaign projected an image behind his podium of the “Les Deplorables” meme, which originated on The_Donald subreddit. This time, the entrance music was “Do You Hear the People Sing?” from the musical Les Misérables.

Trump walks out to Les Miserables song with “Les Deplorables” sign behind him pic.twitter.com/8FGLKL3TU5

Many of Trump’s most fervent fans have embraced the “basket of deplorables” label placed on them by Hillary Clinton at a fundraiser last weekend. Now, it appears the candidate has done the same. “Welcome to all of you deplorables,” he said at the top of his remarks.

And while Trump’s speech was notable for one again reaching out to black and hispanic voters, saying “our support comes from all regions, all backgrounds and all walks of life. You are cops and soldiers, carpenters and welders, accountants and lawyers, young and old, rich and poor, black white and Hispanic. But above all else, you are American”, what was perhaps most memorable was Trump’s redirection of the theme to Hillary’s gun control policies, when he said that the democratic presidential candidate wants to “destroy your Second Amendment.”

As a result, Trump called for disarming the bodyguards who protect Hillary, and mused about the consequences of such a move by saying “Let’s see what happens to her.”  Trump contrasted his supporters, who he said back police and want crime reduced, to Clinton, who he derided as someone who “lives behind walls and raises money from hedge funds.”

Trump’s latest take on Clinton’s security detail once again brought swift condemnation, particularly from Clinton allies, even if not as forceful as the aftermath of a similar remark he made in August when he suggested that “Second Amendment people” could stop Clinton from nominating Supreme Court justices if she’s elected and told the NRA “let’s see how they feel walking around without their guns or their bodyguards.”

And there’s that word again: “This is a truly deplorable comment that betrays our nation’s most fundamental democratic values,” Shappell said in a statement. It is unclear if the pro-Clinton media watchdogs don’t realize that they keep stoking the fire and boosting his appeal in such ongoing confrontations.

Trump made a similar comment about Clinton and her armed protection in May while accepting the endorsement of the National Rifle Association, when he said Clinton would end the U.S. Constitution’s Second Amendment, which guarantees the right to bear arms.

Clinton campaign manager Robby Mook said Friday’s remarks fall into a pattern of Trump inciting people to violence. “Whether this is done to provoke protesters at a rally or casually or even as a joke, it is an unacceptable quality in anyone seeking the job of Commander in Chief,” Mook said in a statement.

It was unclear if this latest attempt to redirect the media’s attention from the only topic that has fascinated the public over the past week, namely Hillary’s health, will succeed. To be sure, the newsflow has been so saturated with “shock value” developments in September, that reverting back to what was an August news item may be generally frowned upon by the mainstream media, which while it may not like Trump, certainly loves the soaring ad spending.