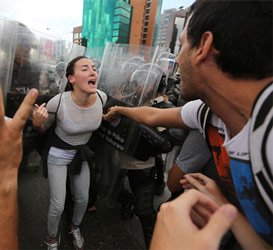 Editor’s Note: We understand that it couldn’t possibly happen in the United States of America where quantitative easing and Plunge Protection Teams abound, but just in case you are curious what a total collapse of a country’s monetary and economic systems looks like we direct your attention to Venezuela. After having tried everything from price controls to rounding up of dissidents, the government is no longer able to control the panic taking hold. As noted by Zero Hedge, 30% or more of the country’s residents consume two meals or less per day. It’s every man for himself, as evidenced by a recent grocery store stampede that left one woman dead and nearly one hundred people injured. For those lucky enough to score some scraps for the dinner table, the government is keeping tabs via finger printing every time a purchase is made.

But not to worry. In America, everything is under control. There is absolutely no need to be concerned. Stock markets are stabilized. The dollar is rising. Gas prices are under three bucks. And, the economy according to the most recent official report, is growing unabated.

And the band played on…

With 30% of Venzuelans eating two or fewer meals per day, social unrest is mounting rapidly in President Nicolas Maduro’s socialist utopia. As WSJ reports, soldiers have now been deployed to stem rampant food smuggling and price speculation, which Maduro blames for triple-digit inflation and scarcity. “Due to the shortage of food… the desperation is enormous,” local opposition politician Andres Camejo said, and nowhere is that more evident than the trampling death of an 80-year-old woman outside a state-subsidized supermarket.

An 80-year-old Venezuelan woman died, possibly from trampling, in a scrum outside a state supermarket selling subsidized goods, the opposition and media said on Friday.

The melee at the store in Sabaneta, the birthplace of former Venezuelan leader Hugo Chavez, was the latest such incident in the South American nation where economic hardship and food shortages are creating long queues and scuffles.

The opposition Democratic Unity coalition said Maria Aguirre died and another 75 people were injured – including five security officials – in chaotic scenes when National Guard troops sought to control a 5,000-strong crowd with teargas.

“Due to the shortage of food … the desperation is enormous,” local opposition politician Andres Camejo said, according to the coalition’s website. It published a photo of an elderly woman’s body lying inert on a concrete floor.

Camejo said thieves had also attacked the crowd, members of which were seeking to buy cheap food on offer at an outlet of the state’s Mercal supermarket chain in Barinas state. 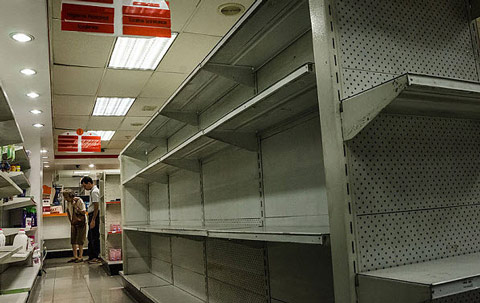 El Universal newspaper reported that Aguirre was knocked to the ground during jostling in the crowd, while the pro-opposition El Nacional said she was crushed in a stampede.

Another person was killed and dozens detained following looting of supermarkets in Venezuela’s southeastern city of Ciudad Guayana earlier this month.

President Nicolas Maduro accuses opponents of deliberately stirring up trouble, exaggerating incidents, and sabotaging the economy to try and bring down his socialist government.

Critics, though, say incidents of unrest are symptoms of the increasing hardships Venezuela’s 29 million people are facing due to a failed state-led economic model. Low oil prices are exacerbating economic tensions in the OPEC nation.

“What’s certain is that we are going very hungry here and the children are suffering a lot,” said María Palma, a 55-year-old grandmother who on a recent blistering hot day had been standing in line at the grocery store since 3 a.m. before walking away empty-handed at midday.

In a national survey, as WSJ reports, the pollster Consultores 21 found 30% of Venezuelans eating two or fewer meals a day during the second quarter of this year, up from 20% in the first quarter.

Around 70% of people in the study also said they had stopped buying some basic food item because it had become unavailable or too expensive.

Millions, Billions, Trillions: The Disaster of Socialism, Once Again

Venezuela’s nearly full-blown socialism is making the news once again. For approximately two years now, the country’s economic crisis has been rapidly unfolding: rising prices, fuelled by increased scarcity of goods and a depreciating currency, were followed by price controls, which brought about even higher prices and more shortages. The list of basic commodities missing from stores, such as toilet paper, has gradually expanded to include cooking oil, corn flour, sugar, sanitary pads, batteries, coffins, and even oil (once the country’s main export). The Cendas survey showed that more than a third of foodstuffs cannot be found on supermarket shelves; moreover, vegetables are 32% more expensive every month, meat prices are going up by 22% every month, and beans are surging by 130%. Basic Venezuelan dishes containing rice and beans have thus become a luxury, as people queue for 8 hours aweek, on average, to buy basic goods.

This time it was the bolivar, Venezuela’s currency, which made the headlines, as it tumbled from 82 bolivars to the dollar last year, to 300 bolivars in May, and to a staggering 670 bolivars this August. Because the Venezuelan administration stopped publishing inflation figures in December 2014 (when annual inflation reached 68%), some economists have designed an Arepa (i.e. cornmeal cake with cheese) hyperinflation index, which suggests a current inflation rate of around 400%. Others estimate the annual inflation rate is actually 808%.

A photo of a Venezuelan using a 2 bolivar banknote as a napkin to hold a cheesy pastry (an empanada) has recently gone viral: the banknote is worth less than a third of one US cent on the black market, while the price of a pack of napkins is about 500-600 bolivars. The photo is reminiscent of the Weimar Republic hyperinflationary episode, where the wholesale price index jumped from 100% in July 1922 to more than 2500% in January 1923, which led to German banknotes being used to light fires (right photo).

One can only speculate at the moment the extent of the damage this episode will leave on Venezuelan savings. But if history is any indication, we could soon hear stories similar to those of some of Mises’s acquaintances (recorded from his lectures by his student, Bettina Bien-Greaves):

[A] man made a will according to which this $ 2,000,000 was to be sent back to Europe to establish another orphan asylum such as that in which this man had been educated. This was just before World War I. The money was sent back to Europe. According to the usual procedure it had to be invested in government bonds of this country, interest to be paid every year to keep up the asylum. But the war came, and the inflation. And the inflation reduced to zero this fortune of $ 2,000,000 invested in European Marks—simply to zero.

[The president of a Bank in Vienna] told me that as a young man in his twenties he had taken out a life insurance policy much too large for his economic condition at the time. He expected that when it was paid out it would make him a well-to-do burgher. But when he reached his sixtieth birthday, the policy became due. The insurance, which had been a tremendous sum when he had taken it out thirty five years before, was just sufficient to pay for the taxi ride back to his office after going to collect the insurance in person. Now what had happened? Prices went up, yet the monetary quantity of the policy remained the same. He had in fact for many, many decades made savings. For whom? For the government to spend and devastate (Mises 2010, 30-31).

As news of Venezuela’s suffering keeps coming through, one cannot help but feel a certain sense of dread. All governments control the money supply to essentially the same extent that Maduro’s administration does. All around the world we have monetary socialism, where national currencies are subject solely to political power. And one cannot help but wonder (and fear) how many more such economic disasters it will take before it becomes clear that socialism of all shapes, sizes, and degrees, is unrealizable, unbearable, and unforgivable.

Economic Update: Global Trade Has Collapsed: “Nothing Short Of A Bloodbath”