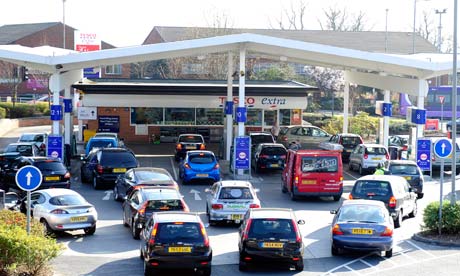 What was a fairly minor fuel shortage sparked when gas tanker drivers in the UK threatened to go on strike has developed into what UK officials are now calling all out chaos, as drivers across the country scramble to fill their tanks amid uncertainty about when transportation services will be up and running at full capacity again.

In what may be a glimpse into the future of other industrialized Western nations that are experiencing rising gas prices and labor problems, residents of the UK were queued in hours-long lines reminiscent of the 1970’s oil crisis in the United States. The lines of drivers waiting to get their daily allotment  of gas are so long that they have led police to shut down gas stations in an effort to ease traffic and avoid delays.

For their part, government officials have asked drivers to remain calm, but may have inadvertently worsened the situation when Energy Secretary Ed Davey suggested that drivers concerned with running out of gas should be “topping up when their tanks go below, say, half-full… they should actually go the full hog and fill up when they can.”

Though the intention was to calm drivers, the government’s official recommendations and actions have had the opposite effect, putting further strain on available gas supplies by prompting drivers to queue up lines in what can only be described as panic buying.

The fuel panic crisis descended into further chaos today after a police force ordered petrol stations  to close because of the huge traffic jams the shortages were causing.

Dorset police ordered a temporary shutdown after dozens of stations ran dry and motorists formed long queues outside those still selling fuel, which they said were dangerous to other drivers.

There are now fears that other forces may follow suit. Petrol stations in Cambridge have already started rationing by limiting customers to £10 worth of petrol or diesel.

The chaos followed the incredible farce of ministers issuing a series of conflicting messages to motorists on how to prepare for a national strike by tanker drivers.

Hundreds of petrol stations across the country have been forced to close thanks to panicking drivers flooding forecourts, the AA  told Mail Online.

Other motoring organisations and filling station bodies have been reluctant to provide an exact number of closures – possibly over fears that precise details could exacerbate the situation.

Among signs that there could be worse to come, Halfords today reported that there has been a a 467 per cent rise in demand for jerry cans since Mr Maude’s ill-fated comments yesterday.

Sales of petrol and diesel increased dramatically yesterday as motorists flocked to garages to fill up.

Fuel rationing returned to forecourts last night as the Army was put at the centre of plans to minimise disruption caused by the looming industrial action.

The Labour leader said: ‘The Prime Minister is presiding over a shambles on petrol.

‘In a delicate situation which demanded statesmanship, the Government showed partisanship. They made a crude decision to play politics with petrol without regard for the consequence.’

‘We now have self-inflicted shortages due to poor advice about topping up the tank and hoarding in jerry cans. This in turn has led to localised shortages, queues and some profiteering at the pumps.’

This is What You Get When the Government Says Don’t Panic (Personal Video Blog):

In the following video it looks like a gas station had opened up some of its pumps, leading to queued up lines within minutes once drivers realized the pumps were open and gas may be available.

To be clear, the UK has not run out of gas. The shortages have been caused because gas transportation drivers have gone on strike, interrupting the just-in-time delivery of a key resource. The mass hysteria perpetuated by the government and media has led to panic by residents who likely don’t know what to believe. They see thousands of their fellow citizens lining up, their government is telling them to get more gas, and so in traditional lemming-like fashion they join the queues and add further strain to an already over-extended system.

The problems in the UK are probably short-term and should be resolved within a few weeks, but the behavior of the media, government and the masses highlights the dangers posed when we become dependent on an infrastructure that can be brought to it’s knees for a variety of reasons.

In the United States, with the signing of President Obama’s latest Executive Order, which takes control of all resources in the United States including the workforce, there is a strong possibility that any nationwide strike that threatens the regular flow of commerce could prompt the President to declare a national emergency and force drivers back to work under what amounts to a martial law scenario. These powers of the President would be most useful in events such as a US dollar currency crisis, which would lead to problems with worker compensation, and as such, could lead workers in essential industries like food and gas transportation, utility maintenance, and emergency services to simply decide to stay  home.

Of course, the government can’t control everything. Even if delivery drivers were forced to make their scheduled routes, payment for gas during a currency crisis or during a middle east conflict where prices for gas spike potentially into the teens per gallon could become impossible for the average person. As well, the US government itself may lose credit status with our suppliers of key commodities that include, among other things, oil and food.

Such events could play out literally overnight once catalyzed. While our system, like the UK, could survive such a shock for a week or two, it would only be a matter of time before the entire financial, economic and social structures in which we live fell apart.

The UK provides us a subdued microcosm example of what true chaos and panic would look like during an extended crisis.