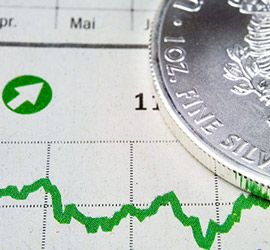 As the Chairman of mineral bank First Mining Finance and the CEO of First Majestic Silver, one of the world’s largest primary silver producers and this year’s best performing stock on the Toronto exchange, Keith Neumeyer has an intimate understanding of silver’s strategic importance. Not only has it served as a trusted currency of last resort throughout history, but the modern world simply couldn’t function without it.

In his latest interview with SGT Report Neumeyer highlights the fundamentals responsible for silver’s meteoric rise. You may recall that Neumeyer is the only Chief Executive who has publicly called out the manipulation schemes being operated by a small concentration of institutional players who are likely acting on the behest of governments and central banks in an attempt to control prices. That manipulation, according to Neumeyer, is now coming to an end, which means silver and gold’s recent upward trend is likely only a small taste of what’s to come.

I’m a believer in triple digit silver… I am obviously a bull on gold as well… I’m looking at $3000 plus on gold and I’m looking for triple digits on silver… It sounds almost foolish… but we are mining today nine ounces of silver for every ounce of gold… Silver is way more rare than people actually think it is and the market is slowly waking up to that fact. I think the ratio should be trading at more of its natural ratio… closer to 9 or 10… not where it’s currently trading of 70-to-1… I don’t think that ratio can last and over the next couple years I am expecting the ratio to get to those prices which will translate to triple digit silver.

All this talk of manipulation… I’m sure your listeners know there’s not a single market in the world, whether it’s LIBOR, or oil, or gold and silver, or the S&P… governments are manipulating all markets around the world, period.

We know that… People might disagree with that statement… but I am a firm believer that governments are behind every single market on the planet and manipulate the market on a regular basis to make the population feel warm and cozy and look the other way so they can continue to act against peoples’ rights.

Being long gold and silver is your anti-establishment trade… There’s been this invisible hand over the gold and silver market for quite some time… we’ve seen the big crash down $50 gold in one day…down $1 silver in one day…  these are the manipulators that are doing that because they’re on the other side of the market.. and it’s in their best interests to let these metals move, so they move them in their favor and reap the rewards of their manipulation…

And of course the governments are all behind what’s going on and that’s why no prosecution ever takes place.

But regardless of the manipulation, Neumeyer notes that more and more players are moving into the precious metals space, including China which is now pricing gold in Yuan and will soon do the same with silver. That means that despite their best efforts, the manipulators who have controlled prices for a decade are in for a rude awakening when their monopoly on the pricing mechanisms are allowed to function freely on the open market.

The takeaway, according to Neumeyer, is a continued bull market in precious metals for a number of reasons that are all converging at once:

With the problems in Europe and China, people are buying gold because it is an alternate currency… But I don’t look at silver as a precious metal at all… I look at silver as a strategic metal… everything we do as a human race requires silver… Your home wouldn’t work, your electronics wouldn’t work, your automobile wouldn’t work… You wouldn’t be able to do the same things you do on a daily basis without silver in your life… As we electrify the planet over coming years we’re going to require more and more silver.

Neumeyer highlights the fact that people all over the world are fed up with politicians, central banks and financial institutions working together to further degrade our rights and pillage our wealth. The Brexit vote is the latest evidence of this, but so, too, is the rise of Donald Trump’s popularity in America.

The anti-establishment movement is pushing back and with it will come collapse of the status quo, panic and violence. Anytime throughout history that confidence in the system has been lost and chaos is the norm, precious metals become the only safe haven asset and currency of last resort. It is for this reason that Neumeyer’s mineral bank has been rapidly acquiring gold and silver assets and why he suggests others should do the same.