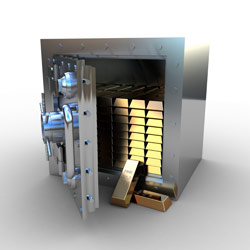 Top alternative asset manager Eric Sprott, whose company has $10 billion in assets under management, sounds the alarm about the day everyone in America finally realizes that the real economy has collapsed.

In a highly informative interview from one of the most respected financial analysts in the world, Sprott explains why he believes gold, silver and hard asset investments are the only way to prepare for the risks associated with a highly leveraged banking system and out of control monetary policy.

I think they’ll just keep running it along until some day something gives. What that giving thing is I’m not exactly certain… Maybe it’s we end up with job losses… people just don’t have the income and all of a sudden you continue to get these weak reports… whether it’s McDonald’s or Caterpillar or HP… and they keep announcing layoffs and so on… it becomes apparent to everyone that there is no recovery…

I think if we look back these last five years, other than the stock market there’s been very little that happened in the real economy that would give anybody confidence. People  have real issues to deal with… when you realize 60% of the population is living paycheck to paycheck it doesn’t take much to tip them over the edge.

We have a very insane financial situation going here where the savers are punished and the borrowers get the benefit of it all.

And now you have another level of concern out there and that is, of course, the currency risk. We’ve seen so many currencies that have been incredibly weak…

The reasons to own gold are now two-fold.

I continue to be a buyer here… I’ve had a couple of announcements out this week where I’ve taken on significant interest in some of the smaller Canadian producers… I just think that the reasons to think that gold and silver could rally here are higher… the returns on these things could be staggering.

While Eric Sprott is well known for his successful investments in precious metals equities, including his own gold and silver backed Exchange Traded Funds, the Forbes billionaires list  suggests that he also holds as much as 90% of his assets in physical gold and silver.

Sprott, like many others, realizes that the “extend-and-pretend” policies being implemented by the financial and political elite will one day end in disaster for the majority of the population. It’s for this reason that high net worth individuals and others who understand the consequences have been buying up land outside of major cities and preparing emergency strategic relocation plans.