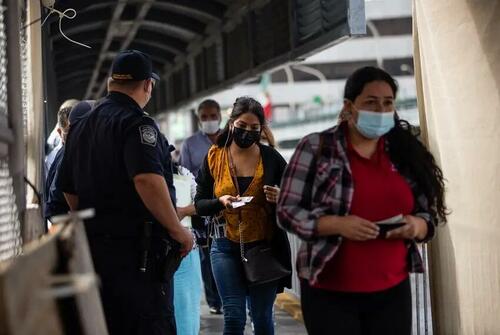 With busloads of migrants arriving from Texas to the nation’s capital, DC has reportedly reached a “tipping point” after just 4,000 of them, causing Mayor Muriel Bowser to request that the DC National Guard be activated “indefinitely” to help with the situation, NBC4‘s Mark Segraves reports.

What’s more, she wants to use the DC Armory as a processing center.

Bowser’s request comes a week after Fox5 reported that the migrants were “overwhelming aid group” that are trying to help process the influx.

Groups like the Migrant Solidarity Network are there to welcome the buses and assist the migrants in getting to their destinations but Barnard reports the groups are receiving little to no assistance from local and federal government.

Barnard says some of the migrants he spoke with are hoping to get to other destinations. Some are hoping to stay in D.C. and find works. Others are trying to get back to Texas.

In April, Texas Gov. Greg Abbott (R) announced that the Texas Division of Emergency Management (TDEM) would provide charter buses or flights to transport illegal immigrants released into the US by the feds, to D.C.

Abbott’s order came in response to the lifting of Title 42 by the Biden administration (which was subsequently blocked by a Louisiana judge, which the Biden admin has appealed) – a CDC order that was invoked in March 2020 under President Donald Trump to minimize the spread of COVID-19 by ensuring that only essential travel occurred at U.S. borders.

It directed that illegal immigrants could be quickly expelled back into Mexico as a pandemic precaution, rather than be processed under Title 8 immigration law, which is a much more protracted process inside the United States.

As Trump adviser Stephen Miller said in response to the report, “The “tipping point” for the country was Biden opening our borders to *millions* of illegal aliens from every corner, and almost every county, on planet earth.”

The “tipping point” for the country was Biden opening our borders to *millions* of illegal aliens from every corner, and almost every county, on planet earth.