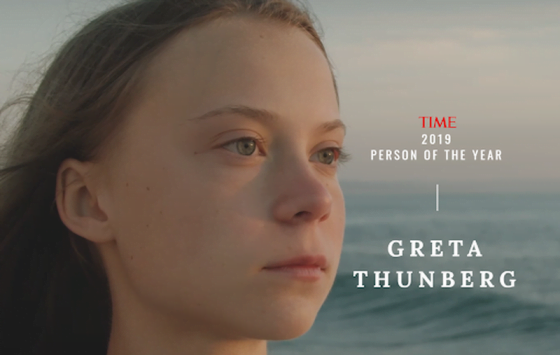 Update (0930ET): President Trump’s son has chimed in on TIME’s decision to name Greta Thunberg as Person of the Year, noting a significant ‘other’ that are fighting for their lives too…

“Time leaves out the Hong Kong Protesters fighting for their lives and freedoms to push a teen being used as a marketing gimmick. How dare you?”

While many among the resistance must have been hoping for “The Whistleblower” to be crowned, TIME Magazine has instead named 16-year-old climate-alarmist Greta Thunberg as “Person of the Year.”

But, as she lambasts world leaders at the Madrid Climate Summit for using “clever accounting and creative PR” to make it look like they are taking firm action in the fight against climate change.

“Our leaders are not behaving as though we were in an emergency,” said the teenager.

“If there’s a child standing in the middle of the road and cars are coming at full speed, you don’t look away because it is too uncomfortable. You immediately run out and rescue that child.

“And without that sense of urgency, how can we, the people, understand that we are facing a real crisis.”

TIME has decided that the 16-year-old from Sweden, who was also nominated for a Nobel Peace Prize in March, is the Person of the Year…

“She became the biggest voice on the biggest issue facing the planet this year, coming from essentially nowhere to lead a worldwide movement,” TIME Editor-in-Chief Edward Felsenthal said on TODAY Wednesday.

In a dramatic and lengthy diatribe, TIME heralds ‘Greta’ as a messiah-like figure who knows all and should be listened to…

“We can’t just continue living as if there was no tomorrow, because there is a tomorrow,” she says, tugging on the sleeve of her blue sweatshirt.

“That is all we are saying.”

It’s a simple truth. TIME argues, delivered by a teenage girl in a fateful moment.

Unless they agree on transformative action to reduce greenhouse gas emissions, the world’s temperature rise since the Industrial Revolution will hit the 1.5°C mark—an eventuality that scientists warn will expose some 350 million additional people to drought and push roughly 120 million people into extreme poverty by 2030. For every fraction of a degree that temperatures increase, these problems will worsen. This is not fearmongering; this is science.

“Throughout history, many great morally based movements have gained traction at the very moment when young people decided to make that movement their cause.”

The award comes a day after  Brazil’s President Bolsonaro blasted the teenage girl as a “brat” over her comments regarding deforestation in the Amazon.

For an alternative perspective on the teen, Ricochet’s Jon Gabriel previously noted that every week, the rhetoric is ramped up:

Prepare yourself for sacrifices,” the LA Times warns.

For the New Yorker, it’s already too late: “What if We Stopped Pretending the Climate Apocalypse Can Be Stopped?”

And ‘Greta’ is the face of that scaremongering.

Our increasingly anxious kids deserve better. Daily prophecies of global annihilation are deeply unhealthy, not to mention unsupported by the vast majority of research. Even if you accept that human activity is heating the globe, relatively few scientists are predicting the end of the world in 12 years or 17 months.

What Thunberg’s parents are doing to her borders on child abuse. Hyping increasingly apocalyptic claims is spreading that abuse to every other young person.

And when was the last time you heard the teen slamming China?

Seriously, the entire green movement in Europe has simply outsourced Green Gilt to Saudi Arabia, China and India. The planet is no better off, actually worse off. Shutting down 30 coal plants in Germany and opening 60 in China, progress??? https://t.co/cAB68Ikbah