Thoughts From The Precipice 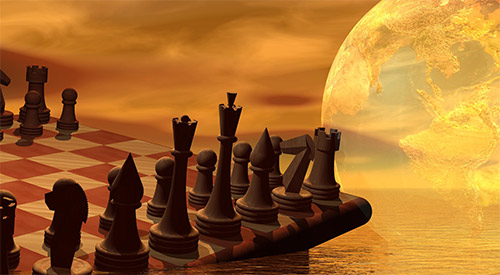 This report was originally published by Chris Martenson at Peak Prosperity

As you already know, things are unraveling. The narratives of the past are being revealed as false and fraudulent — even harmful.

For example, the fallacy of pursuing “ever more” growth. Growth up to a point is beneficial, but it turns self-destructive when it exceeds what available resources can sustain.

As it is practiced, economic growth as pursued around the world today is now destructive. If we continue on our current trajectory, it will become fatal.

It already has for an increasing scope of the natural world. Beauty is being ruined. The complex web of life is being shredded. Species loss is accelerating.

This kind of damage is essentially permanent.

Right now insect ecologists the world over are utterly horrified by the declines in insect populations. “Crashing” is not too strong of a term.

It’s almost as if the Rapture happened; but instead of humans, it’s the insects who were taken.

A healthy, prudent response by a healthy, prudent culture would be to immediately ban any insecticides suspected of contributing to the problem. And to swiftly deploy a serious scientific resources into studying the issue.

Nothing of the sort is happening in the US yet. Few other countries are, either; with the exception of France. This is really positive news:.

With bees on the endangered list and the terrible consequences that will come to pass if they become extinct, France has taken a drastic step in an attempt to save the population of pollinating insects.

As reported by Organic Consumers, the European nation has decided to ban all five pesticides that scientists believe are responsible for killing bees.

Both beekeepers and environmentalists have praised the move, but others, including cereal and sugar beet farmers have issued stark warnings about the move instead. They have warned that their crops could well be left defenseless against harmful insects aside from bees that destroy their produce.

Just recently, the European Union ruled to ban three of the five neonicotinoid pesticides — clothianidin, imidacloprid, and thiamethoxam — but France decided to put a blanket ban on the two excluded by the EU’s ban as well, thiacloprid and acetamiprid. The ban from the European Union starts on December 19 this year.

France’s ban extends to the use of all five pesticides both on outdoor crop fields and inside greenhouses.

My prediction is that within 5 years, France will enjoy a resurgence in all sorts of insects — bees, moths, butterflies, beetles, as well as the birds that feed on them.

If these efforts include habitat preservation and the planting of various plants that support pollinators and other insects, beauty and harmony will return to the French landscape along with better crop and native flora yields.

Perhaps you’ve read the recent research on the process known as “co-extinction” where the loss of a small handful of species can bring about the collapse of an entire ecosystem.

In this past week, the esteemed journal Nature conducted a review of the scientific literature on the subject, offering this observation:

In particular, it is becoming increasingly evident how biotic interactions, in addition to permitting the emergence and maintenance of diversity, also build up complex networks through which the loss of one species can make more species disappear (a process known as ‘co-extinction’), and possibly bring entire systems to an unexpected, sudden regime shift, or even total collapse.

In other words, complex systems are complex. We cannot predict what will happen when such systems are perturbed, because the results are emergent. That means they arise from the exceedingly subtle interplay of conditions which are themselves subject to all sorts of feedback loops.

I’m personally very weirded out and terrified by the sudden loss of insect populations across the globe. I think it’s a very clear harbinger of big danger to come.

The mature response when faced with a situation that is well outside of one’s personal capabilities should be rooted in humility and caution. If you don’t understand what the big red button on the control panel in front of you does, then don’t push it.

Sadly, that’s not how society is reacting (so far) to this tremendous mass die-off.

We’re currently losing species at the fastest rate than the past tens of millions of years. CO2 is now building up at an alarming rate producing unpredictable results. The climate is yet another highly-complex system with its own emergent behaviors, the impacts of which we’re only now just beginning to feel.

So, in my eye, France is doing the right thing. Barring conclusive scientific ‘smoking gun’ evidence that A causes B which leads to C (which is almost never available by the way), they’ve combined both the direct and circumstantial evidence to justify a ban on the entire class of neonicotinoid pesticides.

To date, while causation has not been definitively proven, in part due to the resistance mounted by the deep-pocketed companies who manufacture and sell these chemicals (which are real biocides for their broad toxicity to both invertebrate and avian species), data showing correlation between the use of neonics and pollinator die-offs has been clear for years.

The subtler thing at work here is evidence that a growing consciousness is arising. One that also values non-human life and is willing to admit that science and technology have their limits.

This is a sort of wisdom long absent from the power structures in place.

I am personally grateful for this dawning awareness. And it’s coming not a moment too soon.

“Learn how to see. Realize that everything connects to everything else.” ~ Leonardo Davinci

What do plummeting insect populations have to do with the S&P 500? A lot more than most people realize.

To begin with, the trajectories of both over the past ten years are unsustainable.

Both are artifacts of the human experiment of running an exponential economic growth model on a finite planet. And both will end very badly if continued at their same rate.

Very few people are ready to accept that outlook. If insects go to zero, then in all probability so do humans. One does not simply upend a billion years of careful ecological fine-tuning and skate away unharmed.

With a similar deficit of perspective, many people expect (and are counting on) that equities will continue to compound at 10% per year on average — forever. But these same people will stare back at you blankly if you point out that the economy is advancing at half (or less) that rate.

How can the claims upon something sustainably grow at a faster rate than the thing itself?

Look: the economy can’t grow infinitely, forever. It just runs out of resources at some point. Or room. Or maybe its raping/pollution of ecosytems ends up killings all the insects and that’s the trigger for collapse. Who knows?

All we can be certain of is that our current addiction to infinite growth is a death sentence.

Why do I spend a lot of time focusing on the financial markets?

Because everybody has a stake in them, even if they have no money parked there. So that’s where the trouble will first be felt by the majority of people.

Once the trouble gets large enough and loud enough, more people will be willing to take a harder look at the more difficult issues. This is why I consider the financial markets to by a telegraphing agent for the trouble ahead.

Part of my mission is to help protect people from unnecessary losses. We work hard for our money, our wealth, and it would be a shame to have it disappear in a flash due to inane policy errors by the central banks.

So understanding the likely impact(s) of a painful deflation of the third and largest credit cycle — the Everything Bubble which we’re currently living through — is vitally important.

Yes, I happen to think that we (as in humans) are currently headed for hardship. We’ve got ecological issues rapidly exploding all around us, and our collective energy policy is not progressing nearly rapidly enough to wean us off of fossil fuels — oil, most critically — in time to avoid serious disruptions to our way of live in the future.

But those are harder issues to engage folks on. Huge belief systems stand in the way, guarding the entrance and preventing awareness for most people.

So we begin with the markets. They are non-denominational, nonpolitical, and everybody cares about them.

But our “gains” in the markets won’t matter in the slightest if we’ve collapsed the ecosystems along the way. Or forgot to reconfigure our energy infrastructure for an all-electric future and a complicated assortment of alt-energy devices and storage methods.

More personally, whether or not your portfolio is larger or smaller will be meaningless if you don’t protect that wealth. The same is true if you’re not personally resilient across all 8 Forms Of Capital.

A time of rapid change is upon us. Most people will be caught unawares because they have not taken the time to educate themselves. That’s a pity, but it seems to be a human constant throughout history.

Please don’t be among them. Educate yourself and take smart action today.

Thoughts From The Precipice

As is proper for this time of the year, I’m reminded of all the things in my life that I’m grateful for. This moment. My family. Time. The support of so many PeakProsperity.com readers — both those I’ve met in person, and the many I haven’t.

The past decade of ‘free money’ issued by the central banks has given us all a bit more time to prepare, to get ready, to learn and educate ourselves as to the true nature of the many predicaments we will face in the arriving future.

Despite my very strong motivation in pointing out the many ways our systems are failing us; I am a preservationist. And a conservationist. I think life, of all kinds, is amazing.

I want human progress to continue. I want a better future for all of us. And I want to leave behind a world worth inheriting.

Yes, we’re at the precipice. And while it feels like we may be in the process of tipping over, we are not yet fully over the edge. There’s much you can still do.

Which is why in Part 2: Easy Come, Hard Go we identify which failure points in the economy/financial markets are most vulnerable and the 7 key indicators we’re monitoring most closely now that crash-risk and recession-risk alarms have started screaming loudly.

As I’ve said, there is still much you can do with the fleeting time you have left. Educate yourself and take smart action today.