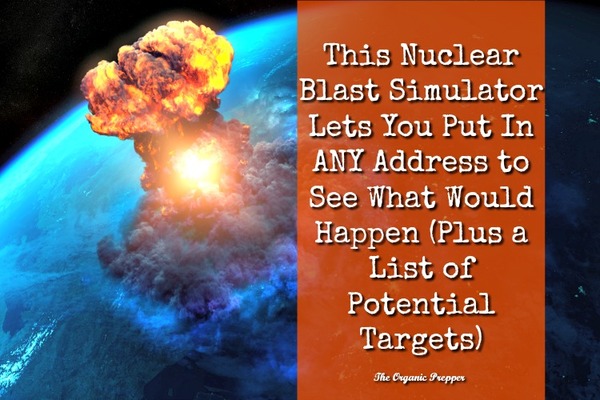 Did you ever think about the places close to you that would be potential targets for a nuclear strike by an enemy? If you’re reading this website, chances are, the answer is yes. But how would a strike to that nearby target affect you?

You can plug any address into this website and see how far the effects of a nuclear strike would reach.

This is a link to the Blast Simulator.

Here’s what a 300 KT strike on the White House would look like, so that you can get an idea of the different danger zones.

You can check out my book, How to Survive a Dozen Disasters, for detailed information on how to prepare for the potential of a nearby nuclear strike and what to do if it happens. This article has some instructions as well.

Where are nuclear strikes most likely to take place?

It depends. There are all sorts of variables with regard to nuclear targets. While most of us would think that cities like New York, Washington DC, and Los Angeles would be more desirable because of high population density, the targets are more likely to be strategic militarily.

This article from Business Insider states that cities aren’t the most likely targets anymore and that targeting has “shifted from cities to nuclear stockpiles and nuclear war-related infrastructure.” The map below shows the theoretical targets of an attack by Russia. 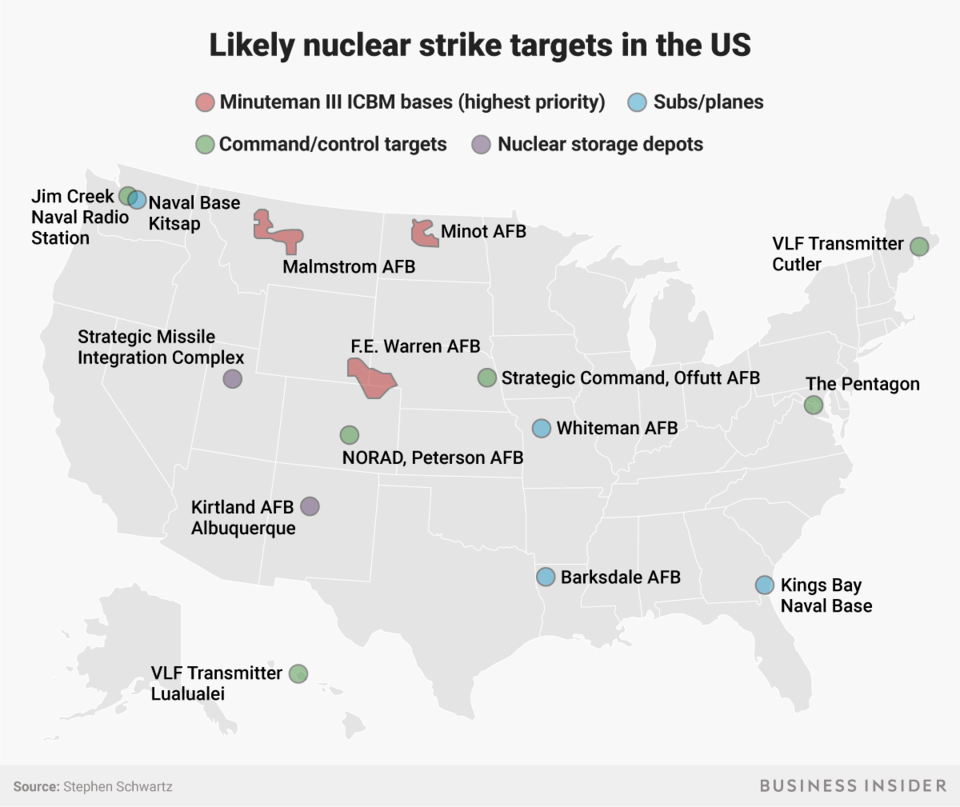 However, if North Korea were to attack the United States, the goals would be different, at least based on a North Korean propaganda photo from 2013.

In Hawaii, one of the closest targets to North Korea, the US military bases Pacific Command, which is in charge of all US military units in the region. San Diego is PACOM’s home port, where many of the US Navy ships that would respond to a North Korean attack base when not deployed.

Barksdale Air Force Base in Louisiana holds the US Air Force’s Global Strike Command, the entity that would be responsible for firing back with the US’s Minuteman III intercontinental ballistic missiles.

Washington D.C., of course, is the home of the US’s commander-in-chief, who must approve of nuclear orders. (source) 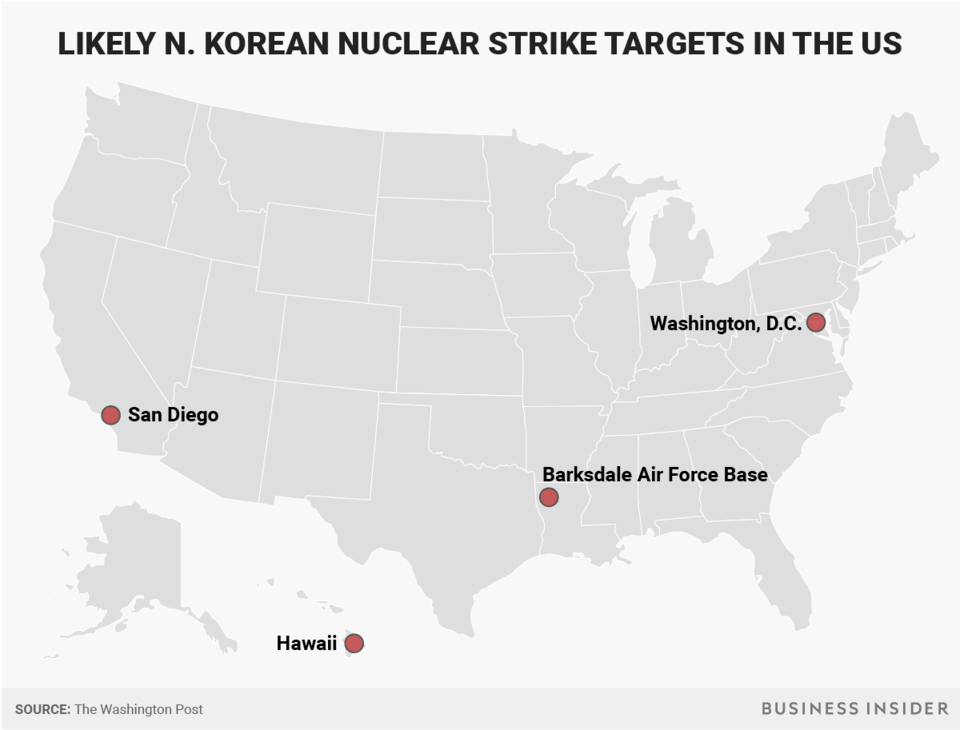 What about radioactive fallout?

If a nuclear strike occurs and you are outside the range of the issues above, the next risk is the radioactive fallout.

The significant hazards come from particles scooped up from the ground and irradiated by the nuclear explosion. The radioactive particles that rise only a short distance (those in the “stem” of the familiar mushroom cloud) will fall back to earth within a matter of minutes, landing close to the center of the explosion. Such particles are unlikely to cause many deaths, because they will fall in areas where most people have already been killed. However, the radioactivity will complicate efforts at rescue or eventual reconstruction. The radioactive particles that rise higher will be carried some distance by the wind before returning to Earth, and hence the area and intensity of the fallout is strongly influenced by local weather conditions. Much of the material is simply blown downwind in a long plume.

Rainfall also can have a significant influence on the ways in which radiation from smaller weapons is deposited, since rain will carry contaminated particles to the ground. The areas receiving such contaminated rainfall would become “hot spots,” with greater radiation intensity than their surroundings. (source)

Radioactive fallout can cause myriad health problems. You can also be exposed to these particles when you eat plants, milk, or meat that has been contaminated by fallout. The biggest risk is thyroid cancer, which is why those who live in a place where there is a risk of fallout should stock up Potassium Iodide pills. (Here’s how to take them to prevent cancer due to radioactive fallout.) A Stanford University study warns:

Nuclear fallout poses health dangers, particularly in the form of cancer, to humans in the form of radiation. When radioactive chemicals break down they release a certain amount of radiation. When humans are exposed to this radiation there is a risk that it causes chemical changes in cells which can kill or makes cells abnormal. In damaging the DNA contained in cells, radiation can cause cancer and can also lead to birth defects in children due to the tampering with a person’s genetic makeup. (source)

The last and scariest variable is this: how big is the bomb? On the map above, you can plug in different types of nuclear warheads for different results. If a Tsar bomb (the largest ever detonated in Russia) struck Washington, DC, it would demolish a substantially larger area and the death toll would reach 1,858,141 people, with injuries to nearly one and a half million more.

As you can see, with a 50,000 KT bomb, the numbers are entirely different.

There is an enormous difference in the scale of nuclear weapons. This video gives you some idea of the scope.

Do you live near any of the potential targets?

When you look at the maps above, are you close to any of the likely targets? How will you prepare for the potential of attack?

Hat tip to Nathan for the link to the simulator!