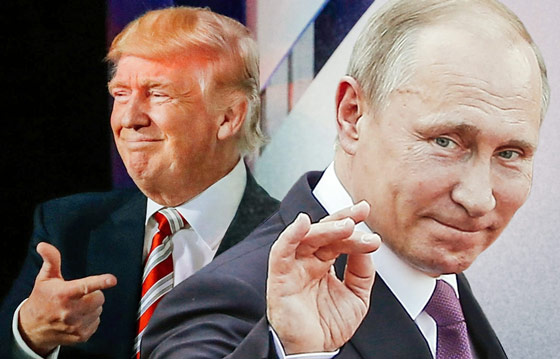 One of the reasons that Syria is “on hold” is that the Russians are now leveraging the President with the connections formed in his campaign prior to the election.  Paul Manafort, onetime manager of President Trump’s campaign apparently has received payments from a pro-Russian political party in Ukraine.  An article covering it entitled Manafort firm received Ukraine ledger payout by Jack Gillum, Chad Day, and Jeff Horwitz was released on Thursday by the Associated Press.

The bad news is that the ledger is substantiated by records booked by Manafort’s consulting firm in the U.S., already under a corruption investigation by the FBI with even more overlap.  Apparently, the FBI and Congress are investigating Manafort’s activities with Russia and possible ties to Vladimir Putin regarding the President’s campaign.  These activities which could have included payoffs allegedly occurred in 2016.

But a distinct pattern is observable here.  Tillerson is still “on the attack,” today demanding that Russia oust Syrian President Bashar al-Assad…and the President in the meantime has announced we wouldn’t be sending troops into Syria.  Perhaps he is hesitant, as (if they have such evidence) Russia would certainly not shirk from releasing information that could be damaging to the President.  At this stage, the threat of such a release appears to be keeping things in check: we haven’t launched another Tomahawk strike yet.

According to the Los Angeles Times, Russia is not being “soft” with Tillerson either, as he has been warned by Russian Foreign Minister Lavrov for the U.S. to “refrain from similar actions in the future.”  As more information comes out, it calls into question the pre-election relationships and activities of the President.  Not even three months into the term, and observe what is surfacing.  As I mentioned, it will take six months to see if the President will be making changes necessary to move his campaign forward.

Remember how the President was going to fire Comey, the FBI director?  For some “nebulous” reason, not only did that not occur, but Hillary Clinton skated right out of the melting ice rink of scandal and corruption that threatened to drown her just prior to the election (courtesy of Comey).  Then the President declared that Hillary was not to be prosecuted.

Now the administration is under investigation for the pre-election campaign relationships with Russia, and it would appear there are no less than 8 people in the forefront of the FBI’s crosshairs…two of them being Tillerson and Jared Kushner, currently working in the administration.  Kushner is Trump’s son-in-law.  On Tuesday, the President gave an interview with Fox Business and said the verdict is not in on whether Comey stays as the director of the FBI.

It doesn’t appear to be “above board,” with all the flip-flopping as to whether Comey should stay or go.  Perhaps if no evidence of links to Russia are found, Comey will be welcomed to stay, and if evidence is found, then he’ll be fired.  The Russians obviously have not released all information that is pertinent to the allegations.

Nothing stops a bombing or invasion in its tracks as this information that is beginning to surface.  Even if the administration deflects it totally, damage will have been done that will hinder needed positive accomplishments prior to the mid-term election campaigning for Congress that will begin in November.  The Ukraine government (created by Obama, essentially) is on the offensive with the release of the ledgers of Manafort that tie them to his consulting firm in the U.S.  The President has been leaning toward Russia, a reason for Ukraine’s Kiev government to expose the ties with Manafort.

With the Syrian Tomahawk strike and the adamancy of the administration that Assad must go, however, the Russians appear to also be using leverage that may damage the President.  Keep this in mind: no matter how “good” the relations with Russia may become, Russia is still for Russia first; they would rather lose the President’s support than lose a vital strategic interest such as Syria.  In the meantime, this is what has kept more Tomahawks from falling, as the President must contend with this.  The potential for damage to his credibility and effectiveness is high as more issues related to this matter surface daily.  The depth and intricacy of these relationships will soon be unable to be denied plausibly, and they will eventually have to be addressed.

The Transformation Of Our Nation Into A Complete Surveillance State Is Almost In Place: “You’re Known, Your Vehicle Is Known, Your Daily Itinerary, Shopping Habits… It’s All Being Recorded”