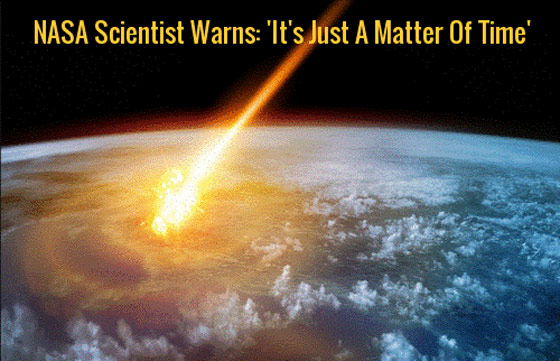 ‘This Is Not Normal’ – Another Rogue Planet ‘Detected’ May Be Within Our Solar System As 2013 ‘Meteor Strikes Moon’ Story Is ‘Recycled’ In 2017 – Predictive Programming?

In the new story over at The UK Express that the Drudge Report linked to Friday morning, readers can be forgiven if they readily dismissed the story as ‘fake news’ due to it’s headline alone: “END OF WORLD WARNING: Watch biggest explosion EVER on Moon as NASA warns we could be next!” What the UK Express story DIDN’T report is the meteor strike on the moon they’re reporting on actually happened back in 2013. “Predictive programming from ‘our handlers’?” asked one commenter on the 1st video below.

As the Express reported, a meteor with the explosive powers of 10 cruise missiles had struck the moon, creating a massive explosion that was visible to the naked eye. While the 56,000 mile per hour collision was caused by a space rock weighing about 88 lbs, “the impact damage was colossal and the explosion shone with the brightness of a magnitude 4 star”.

Also reporting that a similar strike upon the planet Earth would create a crater about 65′ deep while creating a ‘kill zone’ equivalent to 10 Tomahawk cruise missiles striking in the same place, they report the death toll would likely be in the thousands due to its small size and it might just have burned up in our atmosphere if it were headed towards Earth.

So why are they suddenly bringing up a 2013 story in 2017? As our videographer brings up in the first video below, how many other times in your lifetime do you remember a meteor striking the moon?  We reported on ANP back on December 15th of 2016 that according to ‘award-winning’ NASA scientist Joseph Nuth, our planet Earth is due for an ‘extinction level event’ such as a meteor strike and while we’re grateful our moon was struck that time and not the planet Earth, it’s easy to understand why Nuth warns “it’s just a matter of time”. He also warns that we living here upon the Earth are ‘woefully unprepared’ for such a disaster.

In this July 8th story over at the NY Post called “The Mystery Planet That Could Destroy The Earth” they report “just in time for the summer movie season comes news that something huge is lurking out there at the edge of the solar system. It’s really big, it’s never before been detected. It’s warping gravity fields”. And get this, it’s NOT the yet-to-be-found ‘Planet 9’!

That’s right, according to astronomers, ANOTHER new ‘Kuiper Belt’ object has been detected that is apparently playing havoc with planets gravitational fields and their angles. Claiming that ‘Planet 9’ is too far away to have these effects, they tell us: “so, there is almost certainly another mass out there”. Sounding almost like a science fiction disaster movie, the theories they bring up within this story about this latest ‘rogue planet’ are fascinating and eye opening.

It turns out that Planet 9 is not the only massive object out there warping the orbits of the KBOs. According to soon-to-be-published research by Kat Volk and Renu Malhotra of the University of Arizona, there’s another one. It’s called . . . well, it doesn’t have a name yet, but we can make a good guess.

The researchers tell us that these unseen planets are rogues. At some point they wandered into the solar system, and are captured by the gravity of Sol, our puny little sun. Now they’re stuck in orbit, messing with our calculations.

Here’s the thing to remember about rogue planets: They’re not just wanderers; they can be destroyers, too. Simulations tell us that some 60 percent of rogue planets that enter the solar system would bounce out again. But in 10 percent of cases, the rogue will take another planet along as it departs.

And there’s something else for the sci-fi paranoiac to chew on along with the popcorn. The sequence. In early 2016, astronomers find a disturbance in the Kuiper Belt Objects and think “planet.” Fine, natural phenomenon. Then this year, they find another disturbance and think “another planet.” Fine, natural phenomenon. Then how is it that we never noticed before? Maybe the disturbances are . . . recent. So if by chance we’re soon told of a third disturbance, then by the James Bond theory of conspiracy it’s enemy action. 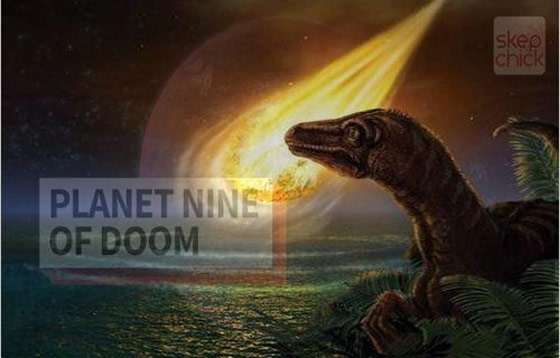 As those who read ANP know, the search has been ongoing for ‘planet 9’ and while still called ‘conspiracy theory’ and ‘fake news’ by many, reality has a way of ‘awakening’ the biggest doubters. As we read in this story from Phys.org, scientists have been searching for ‘Planet X’ for 100 years! And as Space.com reports, according to scientists, “Planet Nine can’t hide much longer”.

According to a recent research paper done by Daniel Whitmire, a retired astrophysics professor, the yet to be found ‘Planet 9’ could be responsible for periodic extinctions upon the Earth. As Professor Whitmire argues, “the unconfirmed planet might trigger comet showers, bringing huge extinction events“. Was ‘Planet 9’ responsible for the meteor that struck the moon back in 2013?

Whitmire and his colleague, John Matese, first published research on the connection between Planet X and mass extinctions in the journal Nature in 1985 while working as astrophysicists at the University of Louisiana at Lafayette. Their work was featured in a 1985 Time magazine cover story titled, “Did Comets Kill the Dinosaurs? A Bold New Theory About Mass Extinctions.”

At the time there were three explanations proposed to explain the regular comet showers: Planet X, the existence of a sister star to the sun, and vertical oscillations of the sun as it orbits the galaxy. The last two ideas have subsequently been ruled out as inconsistent with the paleontological record. Only Planet X remained as a viable theory, and it is now gaining renewed attention.

Whitemire and Matese’s theory is that as Planet X orbits the sun, its tilted orbit slowly rotates and Planet X passes through the Kuiper belt of comets every 27 million years, knocking comets into the inner solar system. The dislodged comets not only smash into the Earth, they also disintegrate in the inner solar system as they get nearer to the sun, reducing the amount of sunlight that reaches the Earth. 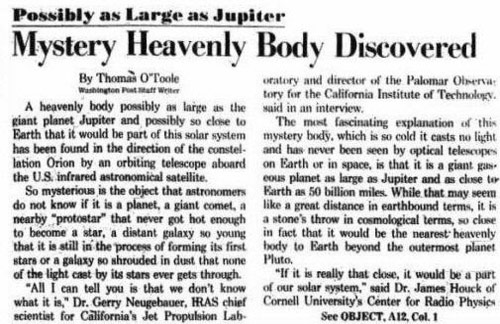 As we’ve previously reported on ANP, all the way back in 1983, both the Washington Post and the NY Times ran stories that reported on the ongoing search for ‘Planet X’. The NY Times story from January 30th of 1983 called “Clues Get Warm In The Search For Planet X” while at the end of 1983, the Washington Post ran a story called “Mystery Heavenly Body Discovered”….and then…silence. The MSM went totally dark on ‘Planet X’.

Found in the vicinity of the Constellation of ‘Orion’ according to the Washington Post story, is it just a coincidence that the search for ‘Planet 9’ is also taking place in the Constellation of ‘Orion’?  Nicknamed ‘the perturber’ by the Cal Tech astronomers who ‘discovered’ it, we believe it’s probably NOT a coincidence that the NY Times story reported:

SOMETHING out there beyond the farthest reaches of the known solar system seems to be tugging at Uranus and Neptune. Some gravitational force keeps perturbing the two giant planets, causing irregularities in their orbits. The force suggests a presence far away and unseen, a large object that may be the long-sought Planet X.

Is ‘Planet Nine’ the long-sought ‘planet X’ aka ‘Nibiru’ aka Gabriel’s Fist? 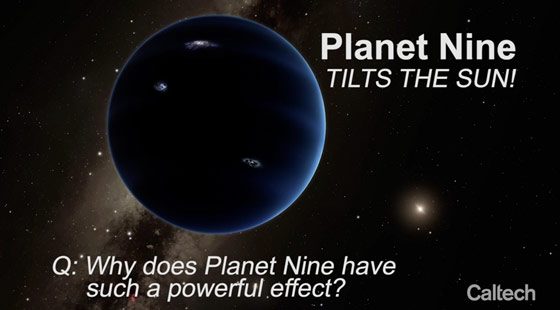 From Astronomy.com: How could Planet Nine have that much influence on our entire solar system when it’s so far out?

Here’s why: Planet Nine is only 10 Earth masses as compared to Jupiter’s 300 Earth masses, but its orbit is huge. So it’s an argument that is basically like an asymmetrical see-saw or a dolly. Planet Nine has a really long orbit so it can assert quite a bit of torque on the inner planets without having to apply so much force. Planet Nine has as much angular momentum as the entire solar system combined, because it’s orbit is so big.

With even ‘Planet 9’ yet to be officially discovered, the 2nd video below takes a look at what some are already calling ‘Planet 10’ for lack of a better name and while astronomers claim that ‘Planet 10’ and ‘Planet 9’ are not the same the same beast, how have suddenly two such anomalies been detected in such a short period of time when the study of our solar system has been ongoing for thousands of years?  It may be time to break out the popcorn.