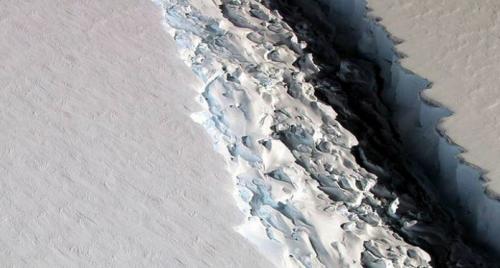 As we’ve pointed out, the supervolcano phenomenon is hardly unique to Yellowstone National Park, where a long dormant volcano with the potential to cause a devastating eruption has been rumbling since mid-summer, making some scientists uneasy.

Surprisingly active supervolcanos have been documented in Italy, North Korea and, now, Antarctica after scientists at NASA’s Jet Propulsion Laboratory (JPL) have found new evidence to support a theory that the breakup of Antarctic ice may be caused in part by a massive geothermal heat source, with output close to the scale of Yellowstone National Park.

Of course, if accurate, this theory would help rebut the notion that man-made climate change is in part responsible for the melting ice, Russia Today reports.

A geothermal heat source called a mantle plume, a hot stream of subterranean molten rock that rises through the Earth’s crust, may explain the breathing effect visible on Antarctica’s Marie Byrd Land and elsewhere along the massive ice sheet.

While the mantle plume is not a new discovery, the recent research indicates it may explain why the ice sheet collapsed in a previous era of rapid climate change 11,000 years ago, and why the sheet is breaking up so quickly now.

“I thought it was crazy. I didn’t see how we could have that amount of heat and still have ice on top of it,” said Hélène Seroussi of NASA’s Jet Propulsion Laboratory in Pasadena, California.

Seroussi and Erik Ivins of JPL used the Ice Sheet System Model (ISSM), a mathematical depiction of the physics of ice sheets developed by scientists at JPL and the University of California, Irvine. Seroussi then tweaked the ISSM to hunt for natural heat sources as well as meltwater deposits.

This warm water lubricates the ice sheet from below, allowing glaciers to slide off into the sea. Studying meltwater in western Antarctica may allow scientists to estimate how much ice will be lost in future.

During their initial work, Seroussi and Ivins created simulations using higher heat flows than 150 milliwatts per square meter, which did not align with their space-based readings, except for one area: The Ross Sea.

Their calculations showed that, in certain sections of the sea, a heat flow of at least 150-180 milliwatts was required to create sufficient meltwater flows that matched with observations. They now believe the mantle plume is responsible for these higher-than-average readings.

The Marie Byrd Land mantle plume formed 50 to 110 million years ago, predating the Western Antarctic ice sheet. The mantle plume theory was initially proposed 30 years ago, but it’s not the only theory. Another posits that the sheer weight of the ice sheets causes melting deep below the surface.