This Country Is On Its Deathbed and Obama Has Placed It There: “A Deliberate and Treasonous Weakening of our Defenses” 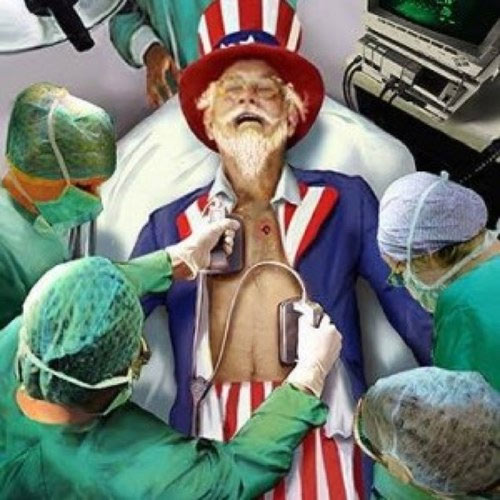 We have all seen the buildup of U.S. and NATO troops facing Russia’s western border and the steady push by those two groups in conjunction with the MIC and the IMF to enter the world into a new Cold War against Russia.  Some of the equipment is pretty impressive, such as the U.S.S. Admiral Zumwalt that has just been rolled off of the assembly line.  But there is an interesting point I wish to make that you may have seen.  Did you notice that in terms of effectiveness, the U.S. military has had its hands tied behind its back in terms of overall combat readiness?

The Zumwalt can be taken out with one of those nice new hypersonic missiles the Chinese and Russians have integrated in their systems.  As of this piece, the Russians are emplacing new radar detecting equipment to offset the “Aegis ashore” ABM station that has been up and running in Romania since last Thursday.  Measure and countermeasures, yes, but in terms of combat readiness, in the words of our own military, we are not up to standards.

On March 22, 2016 a hearing was conducted by Republicans on the House Armed Services Committee to discuss the shortage of parts and equipment suffered by the armed forces.  The Chairman, Mac Thornberry visited Beaufort Marine Corps Air Station, and found that parts were actually taken from a museum to refit aircraft, as follows:

“…an F/A-18 based at Marine Corps Air Station Beaufort that flew in the raid against Libya in 1986 needed a part. The part is no longer made and there were none on hand. Crew and pilots checked the F-18s on display at Beaufort to see if they might find a part. No luck. A lieutenant colonel visiting the USS Yorktown aircraft carrier about two hours away in Charleston, South Carolina. saw an F/A-18 of the same model, a HASC staff member told me today. They scrounged the part from what would appear to be the A  model on the carrier’s deck. (It’s the only F-18 at the Yorktown.  They got the part, but sadly, it didn’t work.”

Reports have mentioned out of Fox News recently that the Air Force is short 4,000 personnel to conduct maintenance, and is short 700 pilots.  The Air Force is reduced to relying on spare parts it can scrap out of a desert scrapyard of aircraft known as “The Boneyard.”  Fox interviewed a Master Sergeant in the Air Force, stationed at Ellsworth Air Force base in South Dakota and he told about burned-out, overworked air crews and maintenance staff and equipment shortages:

“It’s not only the personnel that are tired, it’s the aircraft that are tired as well,” Master Sgt. Bruce Pfrommer, who has over two decades of experience in the Air Force working on B-1 bombers, told Fox News.  “We have only 20 aircraft assigned on station currently. Out of those 20 only nine are flyable,” Pfrommer said

The report went on to state that only about half of the 28th Bomb Wing’s aircraft are even able to lift off of the ground, let alone perform combat missions. The piece detailed some good information on the B-1 fleet and its capabilities, as follows:

“When operating effectively, the B-1 can be one of the most lethal bombers in the U.S. military’s arsenal. Designed as a low-level deep strike penetrator to drop nuclear weapons on the Soviet Union in the early 1980s, the B-1 has evolved into a close-air support bomber. Flying for 10-12 hours at a time high above the battlefield, B-1’s can carry 50,000 pounds of weapons, mostly satellite-guided bombs.  “It can put a 2,000-pound weapon on a doorknob from 15 miles away in the dark of night, in the worst weather,” said Col. Gentry Boswell, commander of the 28th Bomb Wing at Ellsworth.”

This is what the airmen and aircrews have been suffering.  What is very monstrous is the big picture, taken over the past 7 years under Obama: the systematic dismantling and deliberate reduction in combat effectiveness and defense capabilities.

Obama has cashiered the senior Officer and Enlisted Personnel at the Command levels, and the ones with the most combat experience derived from the wars in Afghanistan and Iraq.  Obama has degraded the military’s combat effectiveness by the lowering of standards regarding personnel: assignments are done according to political “correctness” and quota, not by ability.  Case in point the appointment of Eric Fanning as the first “openly gay” Secretary of the Army.

Not one day as a soldier, and this is what the Senate confirmed as their Secretary of the Army.

It is all deliberate…the dropping of the TARS system that augmented NORAD, the mothballing of production for the A-10’s and the Tomahawk, and the lackadaisical stance for coastline scrambles when a “foreign partner’s” bomber or submarine ventures into U.S. territory.

It is a deliberate and treasonous weakening of our defenses.  Obama is a traitor that has managed (with glacial slowness) to implement his policies and destroy the country.  His greatest tool has been the American public, who are too busy trying to wrangle free cell phones and money to care about anything but their own desires.  The country is on its deathbed, and Obama has placed it there.  While he golfs, vacations, and raises funds, our Air Force is reduced to a scavenger hunt to obtain the parts they require, and our military is understrength and weakening by the day.