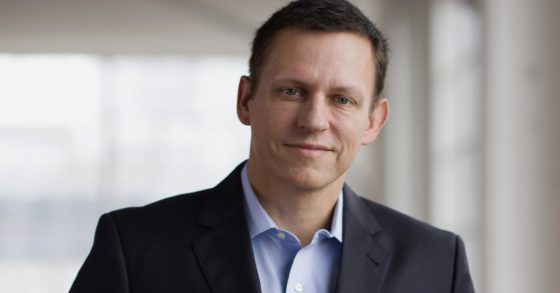 Fresh off his move to Los Angeles, and a profile in the New York Times where he defended President Donald Trump and lashed out at the pervasive groupthink that drove him out of Silicon Valley, billionaire venture capitalist and PayPal co-founder Peter Thiel sat for an interview with Maria Bartiromo at the Economic Club of New York.

Early in the discussion, Bartiromo asked Thiel – who famously opened for Trump at the Republican National Convention – what he thought about Trump’s performance.

In response, he explained that he’s extremely happy with the president’s performance during his first year in office. While the media has been hyperfixated on the latest leak from the Russia probe, Trump has quietly been slashing regulations and questioning orthodoxies like the economic benefits of free trade.

“That’s why, if he runs again, he will be reelected,” Thiel said.

Though “it’s probably the case that Democrats will do quite well in the midterms.”

“Supporting Trump was the least contrarian thing I ever did…nearly half the country voted for him. But within the context of Silicon Valley it was viewed as extremely contrarian.”

“The one thing that I liked about Trump and still very much like about him is a willingness to ask questions and to reframe the debate and not be bound by these strictures.

“There are any of a number of issues where it’s good to rethink things.”

Later in the conversation, Bartiromo asked Thiel about the “Gawker situation.” Thiel, who sounded uncharacteristically willing to discuss an episode about which he has been famously reticent, explained that Gawker’s argument in its own defense was, in reality, an insult to journalism. Thiel said that just because Gawker billed itself as a news site doesn’t automatically extend first amendment protections to everything it publishes.

“I’m very proud to have supported Hulk Hogan in a successful lawsuit… The claim that a pornographer pays someone for sex tapes, and a journalist gets to publish sex tapes without paying people… that’s what in effect what Gawker was arguing.”

The Gawker lawsuit demonstrated to America why defining the scope of privacy protections in the digital age is so important. Today, the conventional wisdom is that Americans have tacitly surrendered their right to privacy by participating in the digital world. But Thiel says this notion is anathema to the preservation of a free society.

There was a brief discussion of trade, in which Thiel briefly pointed out that US is in a much stronger position to bargain with China and EU than vice versa…

“Quite unclear where China can reciprocate with tariffs on US. We’re exporting so little. US no longer is a monopoly exporter in any single area.”

“With Germany, it’s a very similar thing, hard to know how you retaliate in a way that hurts them more than it hurts US.”

The Silicon Valley billionaire then added that Peter Navarro has sold 1 million copies of his book “Zero To One” in China vs. 40,000 in India, which Thiel says is one way to show how one country is thinking about entrepreneurship versus the other.

When Bartiromo raising the European Union’s decision to introduce the “first ever” regulations of Google, Facebook and other giant tech platforms. Thiel sees good reasons and bad reasons for this threat of regulation:

Additionally, Thiel acknowledged that “privacy in a digital era deserves to be rethought” but said that “as a libertarian I always dislike regulation.”

Intriguingly, amid all the hype and anxiety surrounding investment, Thiel explained why, as an investor, he wasn’t particularly interested in artificial intelligence: because of its bad reputation.

“The thing that struck me is how uncharismatic AI is at the point. Basically, it’s going to take our jobs and, once it takes our jobs, at the singularity [the theoretical point at which superhuman artificial intelligence is created, triggering an unprecedented cascade of technological change] it’s just going to kill everybody.”

“I’m not sure that dystopian view is necessarily correct but that’s actually what most people believe,” he said, adding that when considering investments he tends to ask whether technologies are good and how they are going to make the world better…

“The answers for things like AI are quite weak,” he said.

Bartiromo then steered the conversation toward bitcoin, and mentioned that, the last time she had spoken to Thiel, that he had expressed reservations about a lot of cryptocurrencies, but was optimistic about the long-term prospects of bitcoin. Thiel explained that he’s owned bitcoin for a long time, and has been consistently bullish.

Though he doubts it’ll ever be successful as a medium for payments, Thiel believes bitcoin could endure as a store of value that, much like gold, could serve as a hedge against inflation.

“The technology that people like to talk about is the blockchain technology, and I’m somewhat skeptical about how that translates into good investments, but the one use-case of cryptocurrency as a store of value may actually have quite a bit of a ways to go. I would be long bitcoin and neutral to skeptical of just about everything else at this point, with a few possible exceptions.

“The question with something like bitcoin is whether it can become a store of value. And the thing it would replace is something like gold. The analogy is it’s like bars of gold in a vault that never move and you get it and it’s a hedge of sorts against the whole world falling apart.”

“The objections that people have to bitcoin are also objections to gold. It’s this weird currency that’s not backed by any government. Same thing is true of gold. It’s not clear what the intrinsic value of bitcoin is. Same thing is true of gold. It may well be a bubble, but – and most bubbles are unstable and end – one of my friends has this line that ‘money is the bubble that never pops’, so if it is a bubble, then it is money.”

“If everybody decided that a $100 bill was worthless then you wouldn’t want to have a $100 bill.”

There are a lot of crazy dynamics in the crypto world, but one thing that’s different from the dot-com bubble of the late 90s is there aren’t any Wall Street bankers involved… yet – one reason why bitcoin strikes Thiel as “deeply contrarian.”

At the very least, both Wall Street and Silicon Valley were both late to the bitcoin party. While this isn’t a reason to be bullish in and of itself, it’s definitely a factor worth considering. And while there are risks surrounding the influence that miners exert, as well as the unraveling of privacy protections. But, Thiel says, there will likely be only one online equivalent to gold…and right now, bitcoin is the only crypto product that fits that bill.

When Thiel first invested in Musk’s rocket company, SpaceX, he was sceptical that it would be able to build a reusable rocket.

“I have known Elon for 18 years and you should never bet against Elon,” he said.

“I thought it was inconceivable that it could be done … and they have actually pulled it off,” he said.

The company to watch, he said, was Amazon, which has expanded into a broad range of industries, from infrastructure and logistics to retail and healthcare.

“Amazon is the most ferocious company in the US at this point. It’s probably the company you don’t want to be competing against,” he said.

“I can’t think of any other company even close to Amazon.”

Finally, Thiel circled back to Silicon Valley and the politically-correct folly of it all…

“It’s striking how what had always been a very liberal place has become almost a one-party state,” he said.

“When you have complete unanimity that tells you that political correctness may have gone a little bit too far.”