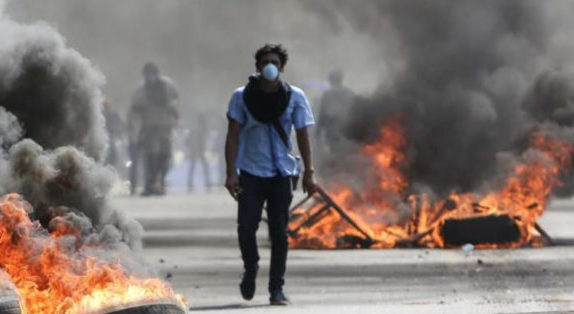 Bloody protests against Nicaragua’s President Daniel Ortega’s government have the United State’s fingerprints all over it.  Over 100 people have been killed since the civil unrest broke out in mid-April and it doesn’t take much to realize the US government is fueling the bloodbath.

According to RT, the so-called marea rosa, or “pink tide”, of allied leftist governments which held sway across Latin America in previous years is being rolled back. Brazil’s Dilma Rousseff was removed from power in a right-wing coup, co-conspirators of which have now managed to imprison the current presidential frontrunner, Luiz Inacio Lula da Silva. Ecuador’s Lenin Moreno has stabbed his former leader Rafael Correa in the back by barring him from seeking re-election, while seemingly purging his cabinet of remaining Correa loyalists and beginning the process of allowing the US military back into the country.

These are all coalescing as other democratic and not-so-democratic removals of leftist governments from power continue. NATO has nabbed itself a foothold in the Latin American region, now that Colombia has joined the obsolete yet aggressively expanding Cold War alliance, in a thinly veiled threat to neighboring authoritarian Venezuela.

Now it’s Nicaragua’s turn for the US to interfere in the government’s efforts to “police the entire world,” paid with by our stolen tax money, of course. Student demonstrations began in the capital Managua as a reaction to the country’s failure to handle forest fires in one of the most protected areas of the Indio Maiz Biological Reserve. The situation was then exacerbated when, two days later, the ruling Sandinista National Liberation Front announced it was slashing pensions and social security payments, sparking further anti-government protests. Targeted opposition violence along with police repressions have led to a mounting body count on both sides. Violence persists in the country, despite the fact that President Ortega has now ditched the proposed welfare reforms and has been engaging in talks with the opposition.

The government has adamantly denied it was responsible for snipers killing at least 15 people at a recent demonstration. And, while we may never know what really happened, it’s fair to say an embattled national leadership in the midst of peace talks has little to gain from people being gunned down in front of the world’s media at an opposition march on Mother’s Day. All I’ll say on the matter is it’s not like we didn’t have mysterious sharpshooters picking off protesters during US-supported coups in Venezuela and Ukraine. –RT

It is unsurprising then that the US is apparently attempting to capitalize on the growing discontent, stoking dissent among the youth in a deliberate attempt to destabilize the Sandinista government. Infamously nefarious US soft power organizations such as the National Endowment for Democracy, also known as the CIA’s ‘legal window’, have set up extensive networks in Nicaragua. Among the leading Nicaraguan student activists currently touring Europe to garner support for the anti-government movement is Jessica Cisneros. Cisneros is a member of the Movimiento Civico de Juventudes, which is funded by Madeline Albright’s National Democratic Institute (NDI). Albright is the former US Secretary of State that said that 500,000 Iraqi Children dying as a result of US sanctions against Saddam Hussein was “worth it”.

If the idea of Washington supporting progressive anti-government forces in Latin America confuses you, then you’re failing to grasp the nature of US interference. During the Cold War, for example, the US supported both the Mujahideen inAfghanistan as well as eastern European trade unionists against the Soviet Union. Indeed, throughout the Syrian conflict, Washington has been arming leftist groups alongside jihadist organizations. It goes without saying that, despite US politicians getting all dewy-eyed over “freedom fighters,” the likes of Jihadists or even trade unionists are not welcome in US society. –RT

It isn’t like the US never interferes, in fact, if it can, it will. And unfortunately, all we get is the bill and the knowing that our tax dollars are being used to slaughter human beings we don’t even know.