The US Is Sleepwalking Towards A Nuclear Confrontation: “It Is Astounding In Its Stupidity” 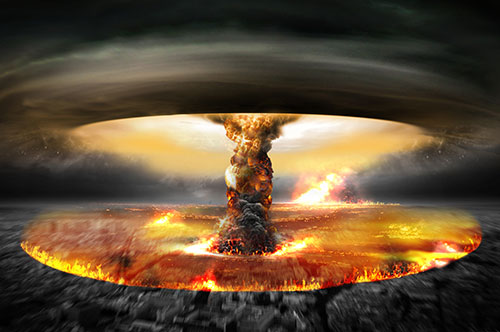 This interview was originally published by Adam Taggart at Peak Prosperity

Following his cautionary analysis on the increasing tension between the US/NATO and Russia, Chris interview Dmitry Orlov this week about the potential likelihood for actual direct conflict to break out between the world powers.

Orlov was born and raised in Leningrad in the former Soviet Union and immigrated to the United States in the mid 70s, He has spent the past several decades traveling back and forth between the two countries, writing about the collapse of the Soviet Union and the many similarities he sees between that and the secular decline happening in the West. Orlov recently co-authored a stark warning with a number of other experts on Russia, concerned that the US is recklessly provoking a military confrontation it cannot win:

The United States is sleepwalking towards a nuclear confrontation with Russia. It is astounding in its stupidity this approach. What’s going on is an effort by the US military and by NATO officials to extract as much money as possible out of Eastern Europe, to continue financing weapons and generally extract military spending out of Europe.

It hasn’t gone that well. But there’s no convincing them. There isn’t a feedback loop from experience to what they do next. One defeat causes them to organize for the next defeat without realizing it. So they don’t realize that what they have done in the Middle East has been completely counter-productive. They don’t realize, for instance, that trying to promote democracy and secular regimes in Islamic countries doesn’t produce democracy or secular regimes – what it produces is jihadism and radicalization and things like ISIS. They can’t process that thought because their ideology says “democracy is the weapon we use”. We used it successfully against the United States. Look what wonderful shape the US democracy is. It is bought and sold on the open market and we are going to do that to every country in the world.

There is no stopping them. They are like zombies. Until somebody shoots them in the head they are going to keep moving.

Now in Russia a military drill can be called without warning at any time, and everything better work. Basically the entire military is at a high state of readiness. The US media has missed the fact that what the Russians did in Syria with a really, really small contingent is something that the US couldn’t possibly have done and NATO couldn’t possibly have done. If you look at the number of sorties and the number of strikes per unit time — which is basically ground crews working seamlessly with pilots on rotation, jets landing, getting refueled, getting reloaded taking off continuously — that is not something that the US is capable of at this point. This is a different military. This is not the US military. This is something completely different. And then there hasn’t been much reporting about the new weapons that Russia has — the S300, the S400 now they are rolling out the S500 which will be able to hit targets in near space and that will basically be like a giant impenetrable shield over most of Russia including all of the ballistic weapons that the US has. They also haven’t really reported on the super sonic torpedoes and cruise missiles that Russia has developed, or mention the fact that Russian nuclear subs lurking along the American western and eastern seaboards all the time on patrol armed with these caliber supersonic cruise missiles that the US has absolutely nothing to detect them with or to shoot them down — and they can be nuclear tipped.

Russia is ready. What is even more scary is that the Russian people are ready. There are all these groups all over Russia that do stunts like they run marathons off road. The marathons sometimes include some tactical objectives too. So this is like paramilitary training for lots and lots of young people in the country. Some of them don’t even like the government that much but that doesn’t mean that they won’t take orders if orders are given. Even if there isn’t a nuclear confrontation and NATO rolls into Russian territory they will bleed and they will bleed to death just like it has always happened with people who invaded Russia. There isn’t a happy outcome, there isn’t a face saving outcome for the United States or for NATO. There is just basically the choice between death and humiliation.

Click the play button below to listen to Chris’ interview with Dmitry (51m:18s)

For more interview like this one and to learn how to prepare for uncertain times visit Peak Prosperity.

The World’s Most Advanced Tactical Gas Mask For Nuclear, Biological, and Chemical Attacks

Planning For Those Who Aren’t Prepared: “Which ones will you put aside reserve resources for?”