The Tyranny of “The Collective” by the Illusions of Narratives 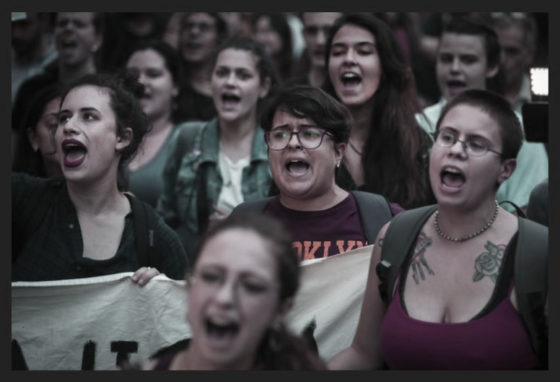 We know that no one ever seizes power with the intention of relinquishing it. Power is not a means; it is an end. – George Orwell, “1984”, part 3, chapter 3,

4 : an oppressive, harsh, or unjust act : a tyrannical act

It is a fact the election of Donald Trump exposed certain undeniable realities in the United States for those willing to see. Perhaps first and foremost of the various revelations is the bona fide existence of The Collective. Also known as the Uniparty or The Establishment, The Collective is comprised of the following:  The Democratic Party, Republicans in Name Only (RINOs), Neo-conservatives (Neocons), the Mainstream Media, the Corporatocracy, globalists, elite bankers and unelected government bureaucrats and officials; also often referred to as The Deep State or Military Industrial Complex.

All of these entities have attained singularity through the decades while, for the most part, retaining some “plausible deniability” of their collusive connectivity prior to the 2016 Presidential Election. But now the veil has been lifted. As The Collective has unified in polar opposition against everything Trump, so has its immorality and lawlessness been additionally exposed; like nude streetwalkers performing dirty tricks in broad daylight on busy corners.

Over the past half century, if not before, The Collective has politicized, and weaponized, everything it could subvert.  From the Federal Bureau of Investigation (FBI) to the courts, from professional football to late night comedy, from Hollywood to advertising, from social media to education, from race to gender, to sex. Especially sex; and in ways seemingly derived from the nightmares of George Orwell and Aldous Huxley.

Paradoxically, however, it is more often the values of conservatives only that are called into account. The Collective will string up blacks like Clarence Thomas via high-tech lynchings and bully free-thinking Afro-Americans like Kanye West, Candace Owens, and Stacy Dash by labeling them “Uncle Toms”. The Collective will pass judgement on conservative Supreme Court nominees with no evidence beyond slander and innuendo. In fact, it is The Collective desiring One World Under Them, which wields Orwellian Newspeak terminology such as racist, misogynist, homophobic, xenophobe, and Islamophobia, like the proverbial pitchforks and torches.

The Collective sows the politics of personal destruction in order to reap the whirlwinds of division. It shills rancor and broken dreams in order to form a new reality in its own image. A world where timeless moral principles are set aside for (they claim) the good of all.

Notwithstanding, The Collective’s new religion is as phony as Michael Avenatti’s concern for clients.

Now social media companies have purged “thought criminals” on their respective platforms, even as the rogue special counsel investigator, Robert Mueller, has exploited imaginary crimes in order to conceal actual government corruption and, likely, treason. The Collective preaches the tolerance of transgender men in the bathrooms of our daughters and wives while actively bullying and defaming those they consider as dissidents. Falsehoods from contrived, and illegal, government “leaks” are published and broadcast as being true while real facts are slandered as “fake news”.

A public that can no longer distinguish between truth and fiction is left to interpret reality through illusion. Random facts or obscure bits of data and trivia are used either to bolster illusion and give it credibility, or discarded if they interfere with the message…

When opinions cannot be distinguished from facts, when there is no universal standard to determine truth in law, in science, in scholarship, or in reporting the events of the day, when the most valued skill is the ability to entertain, the world becomes a place where lies become true, where people can believe what they want to believe. This is the real danger of pseudo-events and pseudo-events are far more pernicious than stereotypes. They do not explain reality, as stereotypes attempt to, but replace reality. Pseudo-events redefine reality by the parameters set by their creators. These creators, who make massive profits selling illusions, have a vested interest in maintaining the power structures they control.

Kabuki Theater? Or Political Darwinism? Either way, conservatives lose political ground whenever they swallow the moral premises of The Collective. This is because The Collective utilizes deception to conceal their actual motives while simultaneously gaslighting and blackmailing conservatives by means of conservative values.

In a manufactured reality, pseudo-events are designed to create consensus in order to manipulate outcomes. In other words, The Collective spins illusion by means of narrative.

Consider the Kavanaugh debacle. Underlying all of the Supreme Court nomination theater, the desire of those opposing the judge is simply this: To project a woman’s right to choose. Whether or not Kavanaugh is actually a threat to that right is beyond the point. He is perceived as a threat to “Roe v. Wade” by his opponents. This means a man’s reputation has now been slandered, and without any real evidence, in order to protect a woman’s right to abort her fetus at will.

At the same time, it’s quite possible The Collective has staged the Kavanaugh production in order to further decimate America’s institutions in pursuit of global objectives.

Dirty politics are merely a subset of politics; and politics define Man’s relations with Man. If the U.S. Constitution was set-up to facilitate political, economic, and religious freedom – then wouldn’t an ideal system designed to control the masses, tear down these same conceptions?

And how would such a system take hold? Perhaps by combining opposites through a twisted sort of immoral ecumenicalism: law plus corruption, androgyny, race and gender divisions by means of political correctness, slander, accusations, and lies – and all for the purposes of a new global singularity.

It’s no surprise how The Collective confounds the logical. It loudly laments children being separated from their parents at the border AND Judge Kavanaugh for threatening the freedom of mothers who choose separation in the womb. If old-fashioned virtues such as logic, reason, morality, and law, no longer apply in politics today, then progress now simply requires faith; or, rather, what people believe. Even so, who says the theological premises currently conveyed by The Collective should be accepted at all? They do. That’s who.

Unfortunately, in all circumstances electronically programmed, or manufactured, the consensus remains real nevertheless.

Therefore, the actual enemy of common sense and decency currently, is not only The Collective, but moreso those who support The Collective with their votes, and by believing its lies, innuendo, accusations, and slander. Therein also lies the dialectical dilemma of the mushy-minded middle; including Republican Senators like Jeff Flake, Susan Collins, and Lisa Murkowski:  As The Collective descends further into criminality, corruption, and dishonor, these blind centrists now lament the lack of “cooperation” and “compromise” in America.

Turning and turning in the widening gyre

The falcon cannot hear the falconer;

Mere anarchy is loosed upon the world,

The blood-dimmed tide is loosed, and everywhere

The ceremony of innocence is drowned;

The best lack all conviction, while the worst

Are full of passionate intensity.

Only one of the bimodal goalposts has significantly moved over the past six decades, yet the lukewarm lament the widening gyre and blame both teams. In the long term, these people cannot save the nation.

So is it all just politics, or reality television? The differences, of course, are in the consequences. Reality can never be denied for long and this is reality: We’ve passed the point of no return. America is circling the drain. All of her institutions are under attack currently and, barring any great and unforeseen circumstances, won’t survive. In order to truly drain the swamp, a lot of people would have to die. Conversely, so, too, must others be removed prior to the establishment of the New Faith.

Therefore, a larger question remains:  Who dies and who survives?

The Russian investigation has decimated the trust of fifty-percent of the country in the voting system. The credibility of the FBI and Department of Justice (DoJ) has been destroyed in the eyes of the other fifty percent. Half of America hates Trump as Congress now experiences abysmal approval ratings. Most recently, the Kavanaugh affair has acted as a splitting maul in a country of felled trees; while the Supreme Court nomination process, and likely the Court itself, now falls to the sound of “timber”.

Is it that simple? As easy as left and right, he said, she said, and black and white? Either way, there are no participation trophies awarded in Political Darwinism. Many on the right are playing the voting game while The Collective establishes its new religion. In truth, The Collective will sacrifice everything you have and blame you all the way down. Be assured it is their plan because compromise is no longer an option. The Rubicon has been crossed and there are those who will die to defend their New World Order. How about you?