The Scourge of Internet Anonymity

[View the Video Below]

CNN anchors Kyra Phillips and John Roberts find it necessary to explain to us that anonymous blogging online may lead to credibility issues with what they publish.

“There’s going to have be a point in time where these people have to be held accountable. How about all these bloggers that blog anonymously? They say rotten things about people and they’re actually given credibility, which is crazy. They’re a bunch of cowards, they’re just people seeking attention.”

CNN and other mainstream news outlets, of course, have never said rotten things about people in an effort to generate more viewers and subsequently more advertising dollars. They’ve never, for example, said Tea Party members were racists for slinging derogatory terms against Congressmen even though there was no evidence of the accusations, or destroyed the life of an individual for being an anthrax terrorist though he wasn’t in any way associated with such activity, and they have certainly never attempted to convince the American people to go to war for reasons that were completely fabricated. We do not legally require that the mainstream media be cross-checked, but there should, according to CNN, be a gatekeeper of sorts to make sure bloggers, anonymous or not, are held to account:

What Andrew talked about with me is this idea of a gatekeeper, but there are huge first amendment rights that come into play here, freedom of speech and all that. He said that people who need to be the gatekeepers are the media to check into these stories.

Forget about “all that.” What we need is to have gatekeeper approved blogs, so that when readers are interested in a story, they know that it has cleared the Ministry of Truth’s freedom of speech gatekeeper watch dog. Otherwise, it’s just, as Kyra Phillips suggested, “crazy.

To some degree, the internet is like a giant worldwide bathroom wall that you can write anything you want about anyone under an anonymous pseudonym. Now somebody’s going to have that information, but I’ve always thought that if you’re going to say something, if you’re going to criticize someone in a public forum, have the courage to at the very least put your name on it. The better thing would be to say it to their face.

Wait, so is it anonymous or does someone have that information? Like perhaps the domain name registrar or the ISP? If you post something on the internet, you can be assured it is logged, somewhere, likely on the server where you posted, be it an article, comment or forum topic. You’re IP address is being logged and if an interested party wanted to track you down, they could.

So, what exactly is it that CNN is arguing about? Obviously, nothing is really anonymous, so there must be an ulterior motive.

Our guess is, that CNN, CNBC and all of their friends are losing massive amounts of market share, and subsequently advertisers, to the sea of anonymous bloggers on the internet who are providing their own interpretations of news events. The mainstream must discredit these sources or they will be eliminated over the coming years, much like their counterparts in the news print business.

This isn’t about anonymous blogging. This is about job security, and these CNN anchors know it!

Anonymous Publications Are Nothing New

The following quote, though not related to anonymous speech, was written by an anonymous author who is now celebrated for his work. Who would argue that his thoughts are crazy or not credible simply because he chose not to put his name to them?

The present state of America is truly alarming to every man who is capable of reflection. Without law, without government, without any other mode of power than what is founded on, and granted by courtesy. Held together by an unexampled concurrence of sentiment, which is nevertheless subject to change, and which every secret enemy is endeavoring to dissolve. Our present condition, is, legislation without law; wisdom without a plan; a constitution without a name; and, what is strangely astonishing, perfect Independence contending for dependence. The instance is without a precedent; the case never existed before; and who can tell what may be the event? The property of no man is secure in the present unbraced system of things. The mind of the multitude is left at random, and feeling no fixed object before them, they pursue such as fancy or opinion starts. Nothing is criminal; there is no such thing as treason; wherefore, every one thinks himself at liberty to act as he pleases.

Thomas Paine’s words ring as true today as they did over 200 years ago.

This article is Gate Keeper approved. 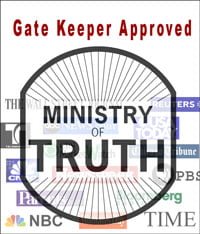