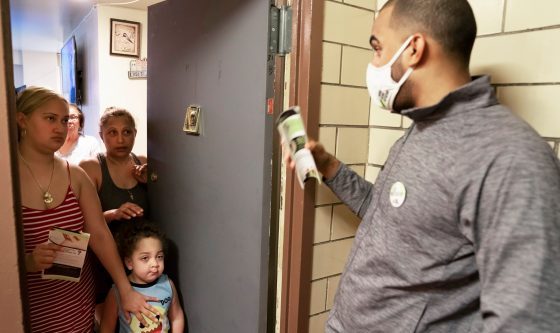 Joe Biden missed his goal to have 70% of the population of the United States shot up with the experimental gene therapy. But he and the other rulers are not giving up.  Not only will the government mobilize COVID “response teams, but” they will also send health care workers door to door to try to convince people to take the shot.

We have known about the “response teams” for some time now, however, sending people to other’s doors is reaching a whole new level.

BIDEN: "Now we need to go to community by community, neighborhood by neighborhood, and often times door to door— literally knocking on doors" to get people vaccinated. pic.twitter.com/VQusdjG30A

“Now we need to go to community by community, neighborhood by neighborhood and, oftentimes, door to door – literally knocking on doors – to get help to the remaining people protected from the virus,” Biden told reporters on Tuesday, adding that coronavirus “surge response teams” would also be mobilized to combat new outbreaks among the unvaccinated.

The ruling class masters are now aiming to make more localized efforts. They will focus on areas where people really don’t want the jab; those areas with relatively low vaccination rates, to get the shot in more people. The rulers will partner with local pharmacies and family doctors to promote Covid-19 vaccines, and it will boost access to the shots at pediatrician offices.

“As we shift from these centralized mass vaccination sites… we’re going to put even more emphasis to getting vaccinated in your community, close to home, conveniently at a location you’re already familiar with,” Biden said.

The new initiative comes after Biden fell short of his target of getting 70% of US adults vaccinated by Independence Day, according to a report by RT.  About 67% of American adults have taken at least one dose, meaning the Democrat president missed his goal by about eight million people, according to CDC data. This data was compiled by the Centers for Disease Control and Prevention, so take what they have to say with a grain of salt using discernment.  We all know how accurate they are:

People do not seem to like the idea of others marching onto their property to try to shove propaganda down their throats.

It’s not clear exactly how far the ruling class is willing to take this just yet. It could mean sending armed state agents to every household or it could mean they are sending “health” care workers, or possibly both.  It could also mean that somehow, the ruling class is ascertaining which homes have unvaccinated residents. Such a program is a violation of privacy rights and it could lead to other abuses or conflicts.

Sending Joe Biden’s Gestapo door-to-door to check up on non-vaccinated Americans is really a recipe for disaster.

Biden did, however, offer more details about the “surge response teams,” noting that they would be made up of “experts” from a number of federal agencies, including FEMA and the CDC. They will help states to “prevent, detect, and respond to the spread of the Delta variant among unvaccinated people in communities with low vaccination rates,” he said. It’s curious how anyone is going to “prevent” the spread of any virus. Besides, isn’t COVID a conscientious virus, with a mind of its own and completely intelligent?

Things could really get interesting if the ruling class insists on pushing this shot this far. Sending agents to the homes of those who have so far refused to comply with the masters’ command to get the shot amounts to little more than harassment. Does anyone out there still believe the government is anything other than slavery.  We had better wake up and start being there for each other because this is looking like it will get ugly.