The Ruling Class Claims They Are Getting The COVID-19 Vaccine 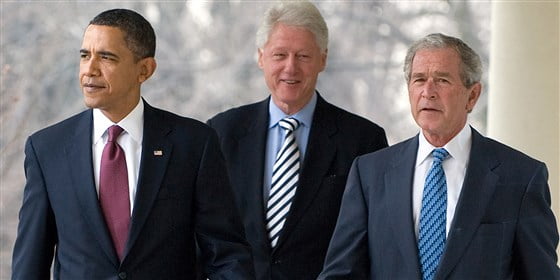 Bill Clinton, George W. Bush, and Barack Obama all say they will be getting the new Coronavirus vaccine. As if we didn’t trust the ruling class already, this should seal the deal. This is an obvious bit of propaganda.

The three former presidents from both sides of the aisle (political parasites and members of the ruling class) have all pledged to take a COVID-19 vaccine on camera when it’s available to them, hoping to assuage fears at a time when recent polls have shown that just under half of Americans said they would not take a vaccine, according to a report by Today.

As Brian with High Impact TV says, “anytime a world leader takes a V-A-double-X on TV, it might behoove the general public to take a closer look.”

We know these three former presidents have all lied to us and deceived us, so the very idea of them taking the vaccine on video is laughable. Even if they do get a shot, does anyone honestly believe it’s anything more than a simple saline solution?  Wake up, folks. It’s 2020 and people are still falling for this.

Obama said on “The Joe Madison Show” on SiriusXM Wednesday that he was committed to taking a vaccine. “I promise you that when it’s then made for people who are less at risk, I will be taking it, and I may end up taking it on TV or having it filmed just so that people know that I trust this science, and what I don’t trust is getting COVID,” he said.

A statement by Bush aide Freddy Ford provided to NBC News and first reported by CNN indicated that the 43rd president (who lied extensively about weapons of mass destruction and 9/11 to send the troops into endless wars) would also be publicly taking the vaccine when it becomes available. “A few weeks ago President Bush asked me to let Dr. Fauci and Dr. Birx know that, when the time is right, he wants to do what he can to help encourage his fellow citizens to get vaccinated,” Ford said. “First, the vaccines need to be deemed safe and administered to the priority populations. Then, President Bush will get in line for his, and will gladly do so on camera.”

So that’s it! Roll up your sleeve and submit, slaves. The presidents are going to.  And there’s no way they’d ever lie and fake these videos of them getting the vaccine. Of course, they’ll be getting the same shot they want us to take… (sarcasm again)