The Return Of The ‘Skull-Shaped’ Asteroid: Another Close Flyby Expected 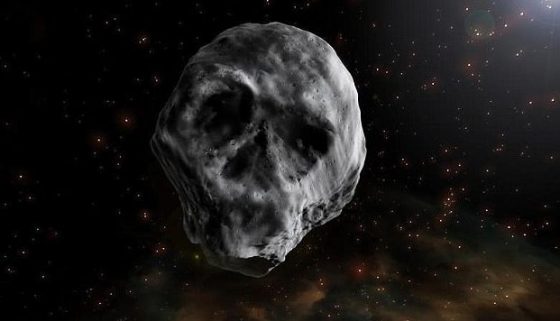 The scary-looking skull-shaped asteroid that flew past Earth on Halloween of 2015 is returning. In less than a year, the odd asteroid will fly by the earth in another close call.

Scientists want to study the space rock this time. But the approach led to The asteroid’s approach led to claims that Earth could be doomed, as prophecies mount. According to the Daily Mail, Earth is set for another spooky encounter with a dead comet that looks uncannily like a skull. It first passed our planet at 78,000 mph (125,500 km/h) at a distance of 310,000 miles (499,000 km) on October 31, 2015, just in time for Halloween.

Experts and scientists say that there is no concern that this space rock will strike the Earth.

Scientists used observatories around the world, including from Hawaii using the Pan-STARRS telescope, to make their findings. The rock, known as 2015 TB145, will flyby at a less dramatic distance than the last one. It will zoom past the planet at about 105 Earth-moon distances, compared to just under 1.3 lunar distances last time around. Astronomers analyzing the 2015 readings found that the asteroid likely completes one rotation every 2.94 hours.

The full findings were published in the journal Astronomy & Astrophysics. Back in 2015, the comet’s approach led to claims from conspiracy theorists that it could cause earthquakes and tsunamis. One Reddit user said: “I assume it would wipe out any city it happened to hit.” But of course, the asteroid never impacted the Earth.

“If it were to hit, there is a 71 percent chance it will hit [the] water. A tsunami would be the biggest concern,” said the conspiracy theorists.  Another added that the shape of the asteroid it could mean “very bad things.” They also said: “The fireball would have an apparent radius of over eight km (five miles), and it’d cause an earthquake measuring in the high 7s on the Richter scale.”

The asteroid is a fascinating shape and looks eerily like a human skull, but scientists want to assure everyone that it will not be smacking into our planet in November of 2018 regardless of it’s irregular and erratic orbit.