The Psychology of Survival: “He Who Hesitates is Lost” 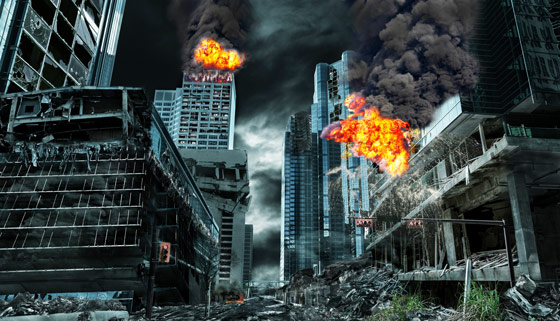 Preparedness isn’t just about the supplies you stockpile and the skills you learn. It’s about psychology too. And an important step toward survival is understanding the psychology behind hesitation.

In a worst-case scenario, hesitation kills.

He who hesitates is lost. Swift and resolute action leads to success. Self-doubt is a prelude to disaster.

It’s simple psychology that no one wants to accept that something horrible has happened.

The human brain is configured in a way that it is in our very nature to deny that something outside our normal paradigm has occurred. This is called cognitive dissonance.

“Cognitive dissonance is the feeling of discomfort when simultaneously holding two or more conflicting cognitions: ideas, beliefs, values or emotional reactions…Dissonance is aroused when people are confronted with information that is inconsistent with their beliefs. If the dissonance is not reduced by changing one’s belief, the dissonance can result in restoring consonance through misperception, rejection or refutation of the information, seeking support from others who share the beliefs, and attempting to persuade others.” (source)

In a crisis situation, denial can be deadly.

These are the phases of psychological reactions in a crisis:

Some real-life examples of psychology at work.

Interviews with people who escaped the World Trade Center after the 9/11 disaster, those who survived plane crashes, and others who lived through fires, all describe how they instantly froze when the devastating incidents occurred. Despite the fact that their very lives were at risk, structures were crumbling, or they were the victim of people who were intent on harming them, they could not immediately accept that the event was occurring.

Many people talked about gathering up documents or personal belongings before heading for the stairwells on 9/11. People in plane crashes often grab their carry-on bags, despite flight attendants’ warnings to leave them behind. People in house fires will often try to grab photo albums or possessions before escaping the building. The response is very common, and it is a function of a brain that doesn’t want to accept the dreadful reality: people busy themselves with things which are mundane in an attempt to delay accepting the current situation.

While these stories are from survivors who did manage to escape with their lives, there are likely many others who did not live because their brains simply refused to accept that something so horrible could be occurring.

These are the most common reactions.

Dr. A. R. Roberts performed a psychological study in 2000, which he reported on in his Crisis Intervention Handbook. Roberts noted these common reactions in the midst of a crisis:

During military training, recruits are put into situations that train them to immediately assess a situation and instantly choose a course of action. This allows them to act more quickly than other people, and it gives them an advantage in many scenarios.

The key, though, is not just to simply act as soon as an event occurs. It is to speed up your actual decision-making process. One way to do that is by skipping the cognitive-dissonance phase. You must go through the above reactions quickly or not at all in order to respond quickly.

If you can immediately accept that something out of the ordinary has occurred, you will be able to move on to the assessment phase instead of wasting precious reaction time convincing yourself that the event itself has occurred.

You can improve your reaction to a crisis.

Speeding up your reaction to unexpected circumstances is a two-fold process. It is both physical and mental.

Think about an athlete. If you throw a ball, even unexpectedly, his immediate reaction is to put up his hand and catch the ball before it hits him in the face. His muscle-memory has kicked in and this is his automatic response. A non-athlete might react differently. He might stand there and get hit with the ball or put up his arm to block the ball, but his first reaction might not be to try and catch it.

The athlete has spent many hours catching and throwing, so his body is already prepared to do that in a split second. As well, sports like boxing or martial arts hone your reflexes and teach your muscles to instantly respond in a certain way.  When police officers and members of the military are undergoing training, they spend many hours at the shooting range to make their weapon an automatic extension of their arm.

Training isn’t just for professional first responders. It can speed up your reactions, both physical and mental. It may not turn you into a ninja but it can definitely improve your chances of survival.

Here are some ways to keep your physical reflexes sharp (or to improve them if they are a bit rusty):

You can improve your mental responses, too.

Equally important, if not more so, is improving your mental response to a crisis.  As was discussed above, people tend to squander time dilly-dallying over the acceptance of the fact that the event is actually occurring. If you’re reading this article, more than likely it is because you have already mentally accepted the fact that sudden emergencies occur, and that puts you one step ahead.

Know the psychology so you can sidestep the unhelpful steps your brain wants to take.

By understanding the natural human responses to crises, we can cut our personal reaction times.

Hopefully, you are never in a 9/11-style attack, present at a convenience store robbery, or caught in a natural disaster, but if you are, your ability to accept the situation, think quickly, and take action could save the lives of you and your loved ones.