The Preservation of Perks, Privileges, and Power: The PPPP 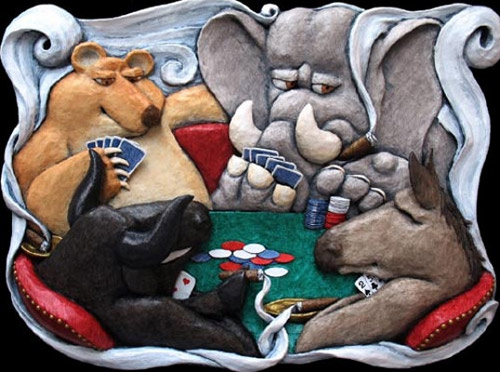 This article was originally published by Gary Christenson at DeviantInvestor.com

The picture is clear – The Powers-That-Be in Wall Street and Washington, the “Deep State,” military contractors, Big Pharma, Big Ag, The Federal Reserve, Mainstream Media, the DNC and RNC, and others want to maintain the transfer game … because the following will continue:

But if the Powers-That-Be had managed well and created a healthy global financial system, would the following exist?

Regardless of which candidate the voting machines select in the US election in November 2016, the above are important concerns that most likely will not be addressed. A few thoughts:

From ZeroHedge: “Yes, The System is Rigged”

“If 2016 has taught us anything, it is that if the establishment’s hegemony is imperiled, it will come together in ferocious solidarity – for thepreservation of their perks, privileges and power.”(the P.P.P.P.)

From Pam Martens: Here’s Why Americans Are Mad as Hell

“Yesterday we published our 1,007th article here at Wall Street On Parade on the insidiously corrupt financial system in the United States known as Wall Street. It’s a system that now operates as an institutionalized wealth transfer mechanism that is hollowing out the middle class, leaving one of every five children in our nation living in poverty, while funneling the plunder to the top one-tenth of one percent.”

“The actual role of Wall Street is to fairly and efficiently allocate capital to maximize positive economic outcomes for the nation. Under the current model, Wall Street is focused solely on maximizing profits in any manner possible, including fraud and collusion, to maximize personal enrichment. When Senator Bernie Sanders said during his campaign stops and a presidential debate that “the business model of Wall Street is fraud,” there was a long, substantive archive of facts to back up that assertion.”

“After the 2001 collapse of Nasdaq, nothing materially changed to stop the systemic corruption model. In fact, corruption accelerated. Instead of allocating capital to build new industries and new jobs to ensure America’s future, Wall Street allocated capital to unsound derivatives and to subprime borrowers, whom it knew from its own internal reports, did not have the ability to repay the loans. Wall Street then offloaded its derivatives risk to AIG and suckered Freddie Mac and Fannie Mae into buying its toxic subprime debt. All three institutions collapsed under the weight of this Wall Street corruption and, jointly, received over $367 billion in taxpayer bailouts.”

From David Stockman: Why Social Security Will Be Bankrupt in 10 Years

“On a cash basis, the OASDI (retirement and disability) funds spent $859 billion during 2014 but took in only $786 billion in taxes, thereby generating $73 billion in red ink.  And by the trustees’ own reckoning, the OASDI funds will spew a cumulative cash deficit of $1.6 trillion during the 12-years covering 2015-2026.”

“So measured by the only thing that matters—hard cash income and outgo—the social security system has already gone bust.”

From ZeroHedge: 96% of Clinton Donations Went to the Clinton Foundation

According to the report, the Clintons took a $1 million donation to charity as a deduction on their tax return for 2015. The $1 million went to the Clinton Family Foundation. It maintains the P.P.P.P.

Gary Christenson is the owner and writer for the popular and contrarian investment site Deviant Investor and the author of several books, including “Fort Knox Down!” and “Gold Value and Gold Prices 1971 – 2021.” He is a retired accountant and business manager with 30 years of experience studying markets, investing, and trading. He writes about investing, gold, silver, the economy, and central banking. His articles are published on Deviant Investor as well as other popular sites such as 321gold.com, peakprosperity.com, goldseek.com, dollarcollapse.com, brotherjohnf.com, and many others.