The Moment Wall Street Has Been Waiting For: Retail Is All In

The ideal bagholder is one who adds more on every downturn (buy the dip) and who refuses to sell (diamond hands), holding on for the inevitable Fed-fueled rally to new highs.

Old hands on Wall Street have been wary of being bearish for one reason, and no, it’s not the Federal Reserve: the old hands have been waiting for retail–the individual investor– to go all-in stocks. After 13 long years, this moment has finally arrived: retail is all in.

If you doubt this, just look at record highs in investor sentiment, margin debt and the Buffett Indicator (see chart below). Current valuations are so extreme that the previous extreme in the 2000 dot-com bubble now looks modest in comparison.

I have my own sure-fire indicators for when retail is all-in. One is my Mom’s financial advisor recommends shifting her modest nest-egg out of safe bonds into the go-go stocks that are topping out. Back in late 1999, it was Cisco Systems and the other dot-com leaders, today it’s the FANGMAN stocks. Sure enough, my Mom just informed me her advisor recommended moving money from bonds into a FANG-dominated stock fund. Bingo, we have a winner.

Second indicator: average people who have never traded stocks are all-in and supremely confident they can’t lose. When 20-year college students are trading based on a “genius” 22-year old friend’s advice, retail is all-in. When a worker cleaning a wooden deck pauses to put $100,000 in a company he knows nothing about (yes, true story), retail is all-in.

Much is made of meme stocks, but the real driver of retail going all-in is the complete collapse of risk / moral hazard: the Fed will never let the market go down is not a meme, it is an article of secular faith, supported by 13 long years of ceaseless Fed intervention / stimulus, all in service of elevating the stock market.

Since all evidence supports this secular religion–stocks never go down because the Fed will never let them go down–the trick is to rotate into the next blow-out winner or buy the dip in Big Tech or a meme stock. And since something is always shooting up like a rocket, the way to become a millionaire is to simply buy what’s hot and buy the dip.

In this secular religion, nothing else matters, all the old stuff is just a distraction: price-earnings ratios, valuation, cash flow, future earnings–none of that old stuff matters. Technical analysis is also a waste of time: just buy the dip and rotate into what’s hot, and the millions just pile up on their own.

Every generation that experiences a speculative mania feels it’s unique. This is the pattern that repeats. The confluence of forces driving the mania to unprecedented heights is so obviously unique and uniquely powerful that it is literally crazy not to grab a board and ride the wave to riches.

What the newly minted millionaires don’t understand is they’re the marks and bagholders. Wall Street has been patiently waiting for retail to go all-in so the pros can sell all the over-valued stocks to the euphoric, trusting retail traders, who will continue to buy the dip and rotate into the next hot meme-stock until their fortunes have dwindled to spare change.

The con requires euphoric confidence that stocks only go up forever, and every retail trader is confident in their ability to ride the wave to riches. We’re finally at that summit of euphoric confidence, where faith in the Federal Reserve is literally a religious experience.

Robbing Hoods going public is a scriptwriter’s touch. (Forgive me if I got the name wrong, I’m working from memory.) Stocks never go down is absolutely true, take it to the bank, until they do. Every share of stock ends up in somebody’s account, and the ideal bagholder is one who adds more on every downturn (buy the dip) and who refuses to sell (diamond hands), holding on for the inevitable Fed-fueled rally to new highs.

That’s how accounts are destroyed, and the wreckage isn’t just financial. The scars of being a bagholder can last a long time. But Wall Street is patient, and a new crop of bagholders eventually catches Fed Fever, and the transfer of over-valued equities to a new generation of bagholders will play out according to the same script. 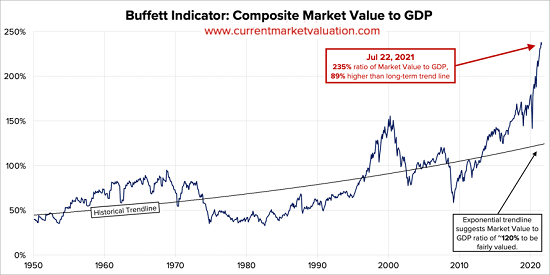