The Last Line of Defense: New Organization Aims to Protect Citizen Journalists: “We Will Stand With You” 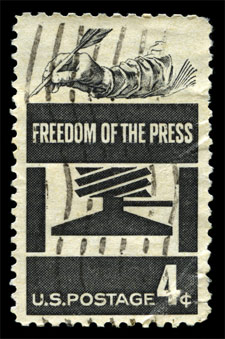 In recent years governments and politicians threatened by truth have stepped up their efforts to crush the free flow of information. In the U.S. Congress Senators like Diane Feinstein (CA) hypocritically say they support a free press, yet work behind the scenes to restrict the right to free speech for the vast majority of Americans. Last year, for example, as a new media shield law was being debated on Capitol Hill, Feinstein argued she wouldn’t support a bill that would define an American disseminating information to the public as a “covered journalist” protected by the Constitution because that would mean everyone in the United States would have a “special privilege” as “an entity or service that disseminates news and information.”

In essence, if it were up to Senator Feinstein and her cohorts, only bonafide mainstream journalists or those being paid a salary as reporters would be given the privilege of being protected by the U.S. Constitution.

If you are a blogger or someone who disseminates information via videos, forums or other web media you, apparently, would not protected by the First Amendment and U.S. Constitution if it were up to people like Diane Feinstein. In fact, under the broad proposals currently being debated, everyone’s right to share information online is threatened:

Should you choose to share an opinion in the comments section on this web site or post on your Facebook or Twitter page, you would, just as this author, fall outside of the Constitutional protections of the First Amendment.

Your comments, if critical of government or big business interests, would not be protected by shield laws. You see, you’re not capable of forming an opinion or citing appropriate references for your argument. To do that, you must be licensed by the State or approved by a court.

But The Constitution First Amendment Press Association points out the utter idiocy of such a notion and explains in succinct terms why you, as an American, are a Citizen Journalist not only by law, but by the very fact that your right to disseminate truth and information is inherent at birth.

“The Press” in America is no longer an exclusive club of “professional” journalists. Today, in the age of camera-equipped cellphones, the Internet, blogs, and YouTube, “The Press” now consists of every literate adult who owns a PC, tablet, or smartphone.

The 21st Century is in fact the era of Citizen Journalists. The key requisite qualification to be considered part of “The Press” is simply enfranchisement as a Citizen–thereby assuring you the full protection of the First Amendment.

Whenever you see or hear the words “legitimate journalist” or “qualified journalist”, beware! Those are phrases used by both politicians and guilds with vested interests.

The CFAPA organization founded by well known survivalist, author and liberty proponent James Wesley Rawles of SurvivalBlog.com and his son Robert Rawles aims to ensure that the rights of every Citizen Journalist in America are protected, whether they choose to publicly share their name or remain anonymous, as was the case when Benjamin Franklin submitted his thoughts and grievances under a pseudonym to the New England Courant in 1722.

The Constitution First Amendment Press Association. (CFAPA.org) was founded in March, 2014 to provide credentials and to provide a venue for a mostly anonymous association of independent American Citizen Journalists. We provide press credentials free of charge to any adult American Citizen who accepts the Constitutional Journalist’s Pledge who agrees to CFAPA’s Member Terms and Conditions.

The CFAPA is not politically affiliated and has members from a broad range of religious, economic, ethnic, and political backgrounds. Our members all have just two things in common: we love our liberty, and we have a yearning to seek and herald the truth, via Citizen Journalism.

The long term goal of CFAPA is to make citizen journalists so ubiquitous that public officials and police officers will stop asking us to see press credentials. But until they do so, we will stand with you, to help confirm your credibility as a citizen journalist.

As the debate over who is or who is not a journalist in America rages on, it should be clear based on our country’s history that the fourth estate – journalists and reporters – are comprised of every single American.

Politicians, however, have a different idea about speech, often suggesting that only some individuals have the right to engage in it.

Thus, we encourage all Americans who want to lend their support to the First Amendment and spread information to all corners of the world to consider the free credentials and support being offered through The Constitution First Amendment Press Association.

In a world where politics and business interests seemingly supersede our Constitution, CFAPA is an idea whose time has come. Fighting the machine as an individual can be a difficult undertaking. With like-minded individuals working together under a single banner within an organization like CFAPA we stand a chance at turning the tables on those who would prefer that our voices be muted.

What It Means to Be a Citizen Journalist: The Constitution Journalist Pledge