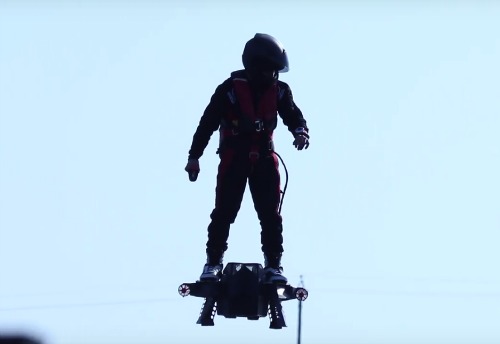 Last year, French inventor and former jet ski champion Franky Zapata blew everyone’s mind when he unveiled his hoverboard, which he has dubbed the Flyboard Air. His invention was on display once again in Arizona last week, when he surprised onlookers by testing the Flyboard over Lake Havasu.

As for why Zapata was testing his device in Arizona of all places, it turns out that his home country recently banned him from using the Flyboard in France, over safety concerns.

Since being published, many commenters have suggested that this video is a hoax. That’s understandable considering how impressive it is. However, Zapata set a world record when he flew his hoverboard 7,388 feet last year, which was confirmed by Guinness World Records.

This device is for real, and its capabilities are amazing. So amazing in fact, that the US Army is interested in it.

The Flyboard Air allows users to fly untethered through the sky to an incredible height of 10,000ft (3,048m), which is almost seven times that of the Empire State Building.

The 37-year-old’s original Water Flyboards are popular with the likes of Justin Bieber and Kylie Jenner – but his latest invention puts Marty McFly’s hoverboard to shame.

The device uses an ‘Independent Propulsion Unit’ to fly for about ten minutes and has a top speed of 93mph (150 km/h), Zapata Racing claims.

Zapata is working with the US Army on uses for the Flyboard Air, but details of their collaboration are classified.

The former jet skier did say, however, that the plans are to make the boards available to combat soldiers.

Last year it was revealed that he had sold his company, Zapata Racing, to Implant Science, a Department of Homeland Security supplier.

As for why Zapata was testing his device in Arizona of all places, it turns out that his home country has banned him from using the Flyboard in France.

However, Zapata still hopes to sell the Flyboard Air to civilians once its development is complete, though he hasn’t revealed how much it will cost. In any case, cost has never been much of a concern for the US military. As strange as it may sound, we may be seeing US soldiers zipping around on the battlefield on these hoverboards in the near future.