The Elephant In the Room: Debt Saturation

Nathan’s Economic Edge says that this is The Most Important Chart of the Century, and until we see another chart with as much impact, we’ll tend to agree: 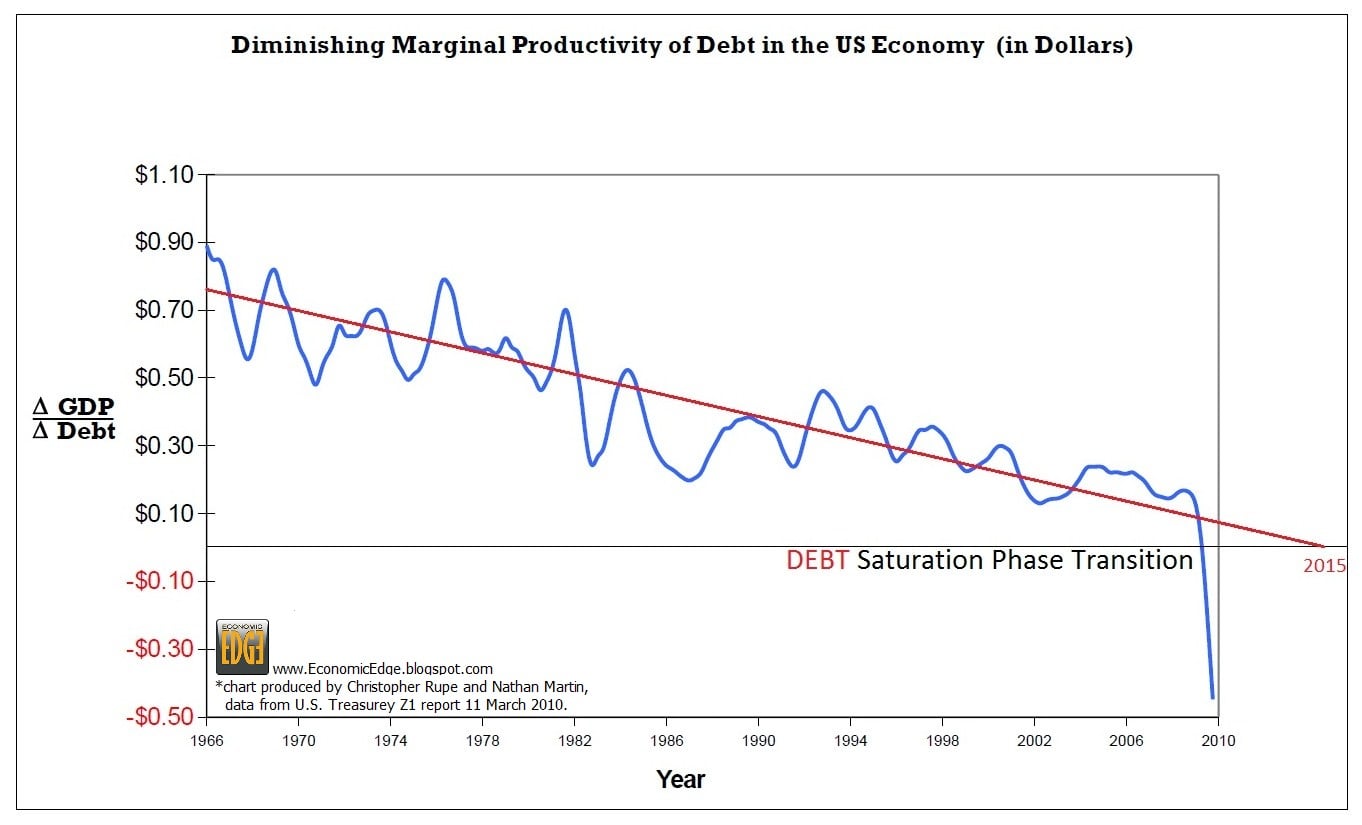 The latest U.S. Treasury Z1 Flow of Funds report was released on March 11, 2010, bringing the data current through the end of 2009. What follows is the most important chart of your lifetime. It relegates almost all modern economists and economic theory to the dustbin of history. Any economic theory, formula, or relationship that does not consider this non-linear relationship of DEBT and phase transition is destined to fail.

It explains the “jobless” recoveries of the past and how each recent economic cycle produces higher money figures, yet lower employment. It explains why we are seeing debt driven events that circle the globe. It explains the psychological uneasiness that underpins this point in history, the elephant in the room that nobody sees or can describe.

This is a very simple chart. It takes the change in GDP and divides it by the change in Debt. What it shows is how much productivity is gained by infusing $1 of debt into our debt backed money system.

Back in the early 1960s a dollar of new debt added almost a dollar to the nationâ€™s output of goods and services. As more debt enters the system the productivity gained by new debt diminishes. This produced a path that was following a diminishing line targeting ZERO in the year 2015. This meant that we could expect that each new dollar of debt added in the year 2015 would add NOTHING to our productivity.

Then a funny thing happened along the way. Macroeconomic DEBT SATURATION occurred causing a phase transition with our debt relationship. This is because total income can no longer support total debt. In the third quarter of 2009 each dollar of debt added produced NEGATIVE 15 cents of productivity, and at the end of 2009, each dollar of new debt now SUBTRACTS 45 cents from GDP!

This is mathematical PROOF that debt saturation has occurred. Continuing to add debt into a saturated system, where all money is debt, leads only to future defaults and to higher unemployment.

We’ve pointed out in the past what mainstream news sources refuse to publish, and this is no exception.

The mathematics, even for those of us who are not expert economists or mathematically inclined, is quite easy to understand. Once you take on more debt than you have the capability of repaying, you have a problem.

We have this problem in America, and the end result is going to be a massive devaluation of the US dollar or a flat-out default.

If you subscribe to the theory that “two plus two equals four” than you understand basic math and have some common sense, and taking the above chart into consideration, you probably have a good understanding of what will eventually happen to the US economy, the US dollar, unemployment, consumer spending, consumer credit, and wages.

Read the full article: The Most Important Chart of the Century…