The Debt Party Is Back: “Somebody Has Clearly Turned the Lights Back On”

This morning we learned that just one day after Congress voted to raise the debt ceiling yet again and relinquish any control it had over the national debt, the U.S. government ran up a record $328 billion dollars in new spending, topping the $17 Trillion mark for the first time since our founding.

With the nation as a whole taking on more debt than it can ever hope to repay, it only makes sense that the private sector would be engaged in the same kind of reckless behavior.

We may be on the cusp of the worst financial and economic crisis in the history of the world, but that is not stopping Americans from taking on record levels of debt.

This is going to end badly. Very badly.

Whether it’s corporate loans, all quality levels of bonds or simple consumer credit, the debt party is back on in the U.S., whether it’s in the boardroom or the living room.

Amid the financial crisis of 2008, the U.S. went into what economists call a “debt deleveraging cycle”—akin to a credit hangover, where the party has ended and everyone there decides to quit drinking cold turkey.

Somebody has clearly turned the lights back on, though, and corporate and individual buying is soaring.

Consumer credit, for instance, surged past the $3 trillion mark in the second quarter of 2013 and continues on an upward trajectory, according to the most recent numbers from the Federal Reserve.

At $3.04 trillion, the total is up 22 percent over the past three years. Student loans are up a whopping 61 percent.

“As long as you can support that debt through growth, it’s really not a major concern.”

But with the U.S. economy growing at a steady, if unspectacular, 2.5 percent rate, economists are mostly dismissive about another debt crisis hitting.

“The building blocks for the consumer to grab the torch are being put together with each and every passing data point as of late,” he said.

Free money, apparently, is being dished out to anyone who’s willing to take it.

But according to most economists we need to embrace all this excess cash and stop worrying about where it’s coming from or how its making its way into our pockets following a de-leveraging cycle that almost seized up the entire global economy just a few short years ago.

“Someone,” has clearly turned the lights back on for your benefit, so that you can continue to gobble up new iPhones, cars, student loans, and over-valued real estate properties.

Don’t worry about how you’re going to pay for it. Just buy it!

We’ll figure out how to create jobs, reduce the 100 million people on monthly government subsidies, and balance our national budget later.

It is a wholly unsustainable strategy that is actually impoverishing us further, even though it may seem like happy days are here again:

When the limits of that person’s ability to pay are reached they wind up homeless.

The reason this imbalance happened in the first place is not because wages are depressed, it is because the debt accumulation in the economy, including particularly the increase of debt issued by the Federal Government of 70% over the last five years, drives asset prices.

You, America, most-particularly including those cheerleaders on CNBC, Fox Business and elsewhere in the “financial sector” are cheering on a daily basis the destruction of these people and celebrating their ruin.

Via Karl Denninger of Market Ticker

We have solved nothing.

In fact, the government has made it worse by convincing the people that we should be doing exactly that which led to the crash of 2008.

But this time around, when it’s realized that the leverage in the system has exceeded our ability to manage it, the collapse will be magnitudes worse than what we’ve already seen.

The last crisis wiped out 40% of Americans’ wealth.

The next one may well reset the entire paradigm of our consumer economy.

Financier and a master of the global chessboard George Soros has warned of this real and present threat previously, recommending to those paying attention that they must think the unthinkable and prepare for scenarios that most can’t even fathom:

I am not here to cheer you up. The situation is about as serious and difficult as I’ve experienced in my career.

As anger rises, riots on the streets of American cities are inevitable.“Yes, yes, yes,” he says, almost gleefully. The response to the unrest could be more damaging than the violence itself. “It will be an excuse for cracking down and using strong-arm tactics to maintain law and order, which, carried to an extreme, could bring about a repressive political system, a society where individual liberty is much more constrained, which would be a break with the tradition of the United States.

At times like these, survival is the most important thing.

Collapse is coming. You can be a victim like the majority of our fellow countrymen will be, or you can take steps now to prepare for the great transition that will soon come to pass.

The powers that be are telling us there’s light at the end of the tunnel.

What they’re not telling us is that it’s an oncoming train. 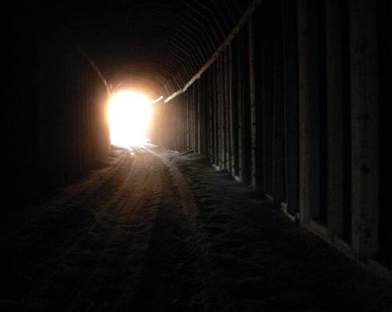