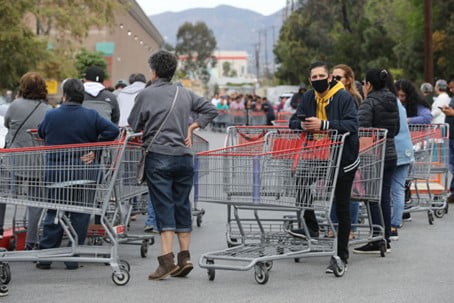 This article was originally published by William Murray at The Ron Paul Institute for Peace and Prosperity.

Fear is contagious: Fear is more contagious than any virus could ever be, and the media has really fed the fear factor when it comes to the coronavirus.

I am by no means playing down the deadly Covid-19 coronavirus. It is a killer. Depending on the reporting nation, it appears that on average 3.4 percent of every 100 who catch the coronavirus die. Those are not good odds.

Adding to the problem, the Center for Disease Control allowed the virus to spread in the United States out of an act of pure stupidity. The CDC refused to allow testing of those with coronavirus symptoms unless they had visited certain areas of China. And what about those who were exposed at airports, restaurants, and stores? People died of the coronavirus in the United States before the CDC diagnosed a single case.

Because most of those infected are asymptomatic the scope of the spread of Covid-19 could only have been accurately measured by random testing. But months after the first actual warning from China there were not even enough test kits produced in the United States to test those with symptoms. Random testing still is impossible. Even citizens returning from hotspots in the first half of March were not tested at airports.

The headlines about seven dead in Seattle the first week of March emptied out stores and brought commerce to a standstill in that city. Shops and restaurants emptied out. With no guidance from federal, state or local officials the panic buying spread throughout the United States endangering the lives of millions of people as they coughed, sneezed and fought each other over toilet paper in Costco stores nationwide.

When the CDC began to test those with symptoms who had not been to China, the numbers exploded. As President Trump pointed out in his announcement most of those coronavirus cases came from Europe. But the CDC did not test anyone coming from Europe with the symptoms of the coronavirus despite the headline news of the virus outbreak there. Why?

Elitism: The problem at every level of the federal, state and local governments is elitism. All the bureaucrats think they are far smarter and superior to those they serve, and as a result, they come to very intellectually stupid conclusions. Romans 1:22 describes the government, business, and academic elites well: “Professing to be wise, they became fools.” (KJV)

Stock market reactions were bizarre even for that fantasy world. The DOW was down over 1,000 one day, back up over 1,000 the next, and then on Monday, March 16th down 12 percent, the worst day since 1987. The White House and the Federal Reserve announced the coronavirus would be fought with interest rate cuts.

Interest rates went to zero and the Federal Reserve pumped in $1.5 trillion before March 16th and then another $700 billion the day after.

WHAT? Using interest rate cuts and QE (Quantitative Easing) from the Fed to fight a killer virus?    NO … an interest rate hike to save the stock market from the coronavirus fear factor. The Federal Reserve also doubled down on overnight loans to help banks cover cash shortfall. The markets crashed anyway.

The bank liquidity problem predated the coronavirus. The bank bailout has been going on since last September. The Federal Reserve printed half a trillion dollars to save banks over the last six months. Does that make sense? Most of that money went to cover loans for more stock buybacks and operations of big corporations. The market plunge now requires even more Federal Reserve money printing to cover losses.

The Fed money could not bring the Markets back up because corporations had stopped “buybacks.” It was the buyback of their own stocks by corporations that drove the market up over the last decade or so, not value. Corporations like Exxon – all the big ones – bought back hundreds of billions a dollars a year of their own stock to drive up the share price for investors, and I might add, to increase the bonuses by millions of dollars a year of the CEOs of those companies.

The collective corporations in the S&P bought back more than 100 percent of their total free cash flow in 2019 and for many years before that. Some companies, even in the DOW, paid out more to buy back stock than they made in profit. They borrowed money to buy back stock and drive up the markets.

Remember Boeing Aircraft and the 737 Max problem of two crashes that grounded the planes worldwide? Over a period of six years (2013-2019) Boeing paid out $17 billion in dividends and bought back $43 billion of its own stock to drive up the stock price. That $60 billion came to 140 percent of profit for those years.

The CEO of Boeing received tens of millions of dollars for raising Boeing stock value! When he was finally forced out because of the 737 Max crashes he was given $18 million to leave as a reward for cutting production corners and artificially driving up the cost of the stock.

Corporations, like Netflix, that have never made a profit had shares trading at hundreds of dollars.

The markets are so important to the elites that President Trump along with the House Democrats and Republican Senate will do anything to get people buying and cash flowing so the big corporations can restart the buybacks they had to stop because of Covid-19 loss of business.

United Airlines used over 80 percent of its free cash flow in 2019 to buy back stock and now has gone begging for money from President Trump and the Congress to continue operations.

The elites who run the businesses and the bureaucracies are worried about their status and will do anything to keep the markets flying high. Their wealth is based on a fantasy bubble that something like the coronavirus could pop. The elites were so fearful they pretended there was no problem until the problem was too big to hide. Now the public must suffer.

The Elites, the top 10 percent that own or control 80 percent of the wealth of the nation, have failed us. That includes not just the billionaires, but the Donald Trumps, Joe Bidens, Nancy Pelosis, Mitch McConnells along with the bankers, brokers, CEOs and academic leaders who have produced so many college graduates who now work at convenience stores.

They built the system to do what it does … Create false value in stocks because capital gain is taxed at a far lower rate than dividend income. The tax system was designed to do what the CEOs did to raise the value of their stock at the expense of quality, safety, and jobs.

The political, financial and educational systems have been broken by blood-sucking elites and the time for true populism is now. The nation belongs to the people, not to the elites, and now is the time for the people to take back their nation.

Libertarian populism, the fundamentals as taught by Frederick Hayek in the Constitution of Liberty must finally be turned to for the true freedom the people want and deserve.

William J Murray is the president of Washington DC-based Religious Freedom Coalition and author of several books, his last, Utopian Road to Hell, details the historic pitfalls of collectivism.