The Chart That Will Crash The Market: “We Have Reached the Terminus”

The screeching coming from CNBS and elsewhere this morning is amusing.

There’s only one chart that matters, and it will, when recognized, blow up the stock market — sending it down 50% or more. 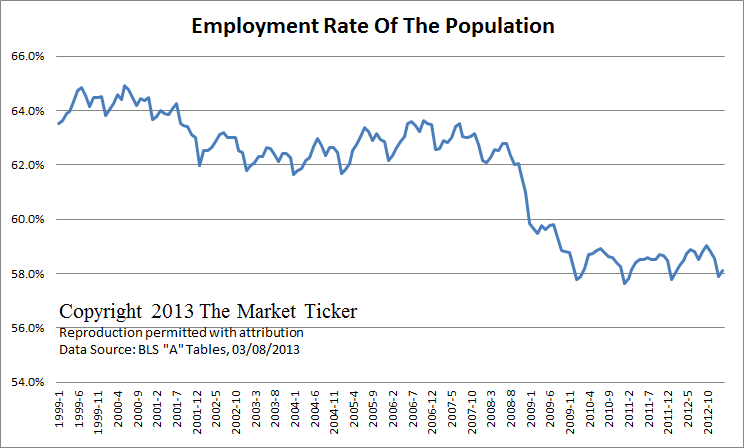 That’s it.  And the ADP report this morning is showing the pathway to recognition, as construction has stalled and the destruction of job creation in small and mid-sized businesses exposed to Obamacare will finish it off.

I continue to maintain that we’re in a time very similar to 2007, when the facts were on the table.  Banks paying dividends with money they didn’t have.  Hedge funds that blow.  Bubbles in crazy places, then housing, this time in subprime car lending, student loans and even Bitcon.

The transports are telling you that all is not well.  CAT is confirming it.  Copper is warning that we’re in deep trouble internationally, and irrespective of the claim that “America benefits from everyone else’s pain” that’s only partially true — in the end earnings are what drive stock prices, and the red flags are waving at warp speed on earnings.

To go along with this are rail car loadings.  The trouble here is that baseline is in a serious downtrend — and after halting its decline from 2008 to 2009 over the last year it has slid severely once more.  There will be those who argue that this is “no big deal”; I disagree.

At the end of the day the premise behind the Fed’s intervention in the market is that “cheap money” promotes hiring through an indirect process.  But inherent in that process is a belief that the economic model from 1980 to 2007 can be restarted — a model predicated on ever-larger amounts of leverage in the economy.  That model had positive feedback that came from the bond market rally from 1980 to 2008 as well with yield compression helping to fuel the fire.

More than five years into this experiment the results are clear: It doesn’t work.

I believe that by the time we get to the end of the year we will be looking back at these signs and asking “what the hell was I thinking?”

Credit expansion is not going to restart because it can’t — we have reached the terminus of that economic model, like it or not.

Reprinted with permission from Karl Denninger of The Market Ticker