The Battle for the U.S. Border, Besieged by Illegal Aliens 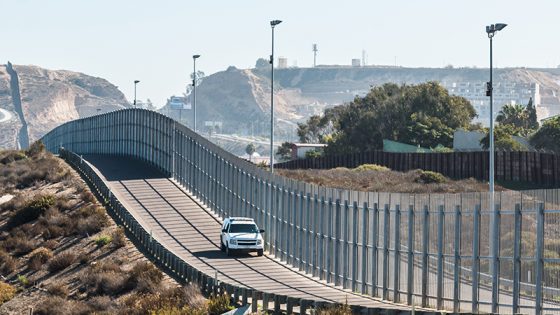 For several months, now, there has been a steadily growing focus on the U.S.’s implementation of increased border patrols, the creation of a permanent fence or divider on the border, and the question of illegal aliens. The president has taken a firm and unyielding stance. On June 25, AP was quoted as reporting “President Donald Trump on Sunday compared people entering the U.S. from Mexico to invaders and said they should be back without appearing before a judge.”

The president was quoted as saying, “We cannot allow all of these people to invade our country. Our immigration policy, laughed at all over the world, is very unfair to all of those people who have gone through the system legally and are waiting [in] line for years! Immigration must be based on merit – we need people who will help to Make America Great Again!”

Absolutely right: they are illegal aliens, and as they are crossing the border illegally without citizenship, they are foreign, non-citizens – aliens, by definition.

The stance of the ACLU, the Democratic Party, and other communist organizations are just such: communist platforms that are evident within Alinsky’s “Rules for Radicals,” Van Jones’ “Top Down, Bottom Up,” principle, and the pseudo-heartfelt “welcome” to the illegals from lifelong party operatives such as Nancy Pelosi and Chuck Shumer. In the manner of the “open dams” in Europe, allowing the floodgates to open up with Muslims and destroy the European nations from within, the Democrats, communist-sympathizing domestic corporations (globalist and communist are interchangeable), and the “entitlement nation” of citizen-sheeple are pushing hard to make that happen here.

From a technical standpoint, not only are they illegal aliens, but also they are invaders, just as the president stated, and that by their own admission. In the words of the Mexicans who are proponents of “La Reconquista,” the entire southwest and half of California “belongs” to the Mexicans. The exact percentage is unknown: polls of this nature are not taken, and if they were, the results would be discounted or labeled as “racist” in the manner of “The Bell Curve,” released in the mid 1990’s with amazing statistical analyses.

The majority of these “Reconquistadores” truly believe that with a combination of illegal incursions, the drug cartels, and eventually the support of the Mexican government, that the territory ceded to the U.S. in and surrounding the war with Mexico will be reclaimed and renamed Aztlan. Tens of millions have already crossed, and the majority of these illegal aliens brought that philosophy with them: thus, they are illegal aliens, and this is an invasion.

Complicit with that invasion are the politicians in the United States and the moneyed interests, lobbyists, and corporations who set up and pay the politicians’ “second retirement fund,” as in the “Clinton Foundation,” the most massive presidential money-laundering operation carried out by a former president, his family, and his network. The corporations have paid these politicians to look the other way and make it easier for illegal aliens to work in this country under the table. President Reagan had a big hand in triggering this “amnesty” mind-set with his policies that did not enforce border security or crackdowns on corporations employing illegal aliens outside of the tax-format of society.

President Trump is doing the right thing. He is setting the wheels in motion for a no-tolerance policy for illegal entry into the United States. He is fulfilling his job as the Commander-in-Chief by dealing with the border and protecting the interests of U.S. citizens as provided within the Constitution.

Time Magazine’s June 25 edition has an article entitled “A parent’s nightmare at the U.S. border.” The article is a perfect characterization of the Left’s demonization of any…any…upholding of U.S. laws relating to border control. The article uses “A young Honduran woman named Miriam” and her “18 month-old son” that she carried in her arms and walked across the border with, on grounds of “asking for asylum.”

The author’s name is Haley Sweetland Edwards (go figure), and it painted a picture of the struggling, valiant young mother and her infant son against the evils of the U.S. government who wouldn’t just let her walk across. Asylum? Viktor Belenko was granted asylum back in ’74 when he flew a MiG, the “Foxbat” to Japan and defected from the USSR. That’s a case for asylum. Haley Sweetland Edwards, you just walk across the Mexican border asking for “asylum,” and see what they do to you there, or in any other country for that matter.

The mindset is this: you give your money, open your homes, and you let them into the borders…but just don’t give them my things: that is the liberal mindset in a nutshell. Liberals are always generous with things that don’t belong to them, generous with anything that doesn’t come directly out of their pockets or bank accounts.

The irony: it does, because indirectly these illegal aliens are responsible for making their taxes rise, making their wait time in an emergency room double, and is adding to the cost of goods and services in the U.S. across the board. The illegals take jobs out of the hands of American citizens and devalue your own money, liberals, by allowing an outflow of cash that increases the balance of payments for the U.S. and undermines the economy. The president is looking out for the interests of the United States and her citizens, bottom line.  July 2 of Time Magazine’s cover has a picture of the president looking down at a crying Latino child, with the caption, “Welcome to America.”

Let’s take an investigative look at this and find out who the staff at Time is and how many of them have an interest either politically or economically or both – of allowing illegal aliens to cross the border with no restrictions. The American media is one of the vilest, most evil, most despicable institutions that has ever existed on the planet. The crimes that have been committed with their blessings make them nothing less than complicit in their commissions.

And regarding that Time issue? They don’t have a page that lists the editor-in-chief, the editorial staff, and the photographers: the anonymity to protect operatives of the communist party, card-carrying or otherwise. “Pravda” or “Izvestya” is a better title for those fawning communist-syndicated AP parrots.

Omitted are the details of the gang-bangers and narcotrafficantes, and the challenges the Border Patrol faced within the administration that was supposed to support it. Omitted are the crimes committed…murders of U.S. citizens…after these illegal aliens have been let out of detention. Fast and Furious and a dead border patrol agent was under Obama’s watch, and these detention camps that are just now coming to the forefront of the media’s camera lenses? They all sprung up during Obama’s tenure, not under the current administration.

In Europe, Hungary, Czechoslovakia, Poland, and now Italy are taking a stand and stemming the inflow of illegal aliens into their countries. The United States has the chance to do the same. The globalists cannot win unless they completely collapse nations from within and destroy and devalue the borders, language, religion, economy, and culture. They’re using mass migrations (illegal aliens) to accomplish this. In order for the president to succeed, he needs the support of the Congress and American people to stem the tide of illegal aliens into the United States.