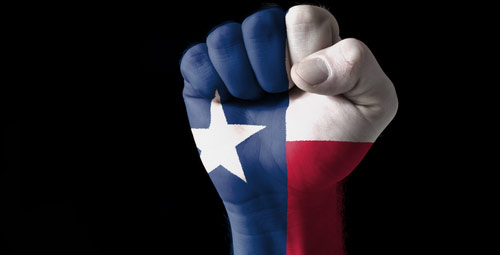 Just because one part of the country has seemingly lost its mind and is willing to give up their freedom for the promise of more security doesn’t mean everyone is on board.

In Texas, where voters took to the polls Tuesday night, a completely different set of ideas is at play. And if nationwide sentiment is any indication, other conservative and libertarian leaning states will soon follow.

Though only about half of the votes have been tallied so far, the people of Texas have spoken. It’s a roar, in fact. Voters are standing in unison and have overwhelmingly approved a variety of propositions that may well send shivers down the spines of supporters of things like universal health care, rampant welfare dependency, special privileges and gun rights.

The following results speak for themselves.

First on the chopping block is the Patient Affordable Care Act, more commonly known as Obamacare. Apparently, 93% of Texans don’t take well to having the federal government mandate what they should or shouldn’t buy with the penalty for non-compliance being IRS harassment and prison time:

The Affordable Care Act, also known as “Obamacare”, should be repealed.

This one might be a little scary for those folks who spend their lives on their couches smoking weed or mainlining heroin while hard working Americans pay for their dope:

Texas recipients of taxpayer-funded public assistance should be subject to random drug testing as a condition of receiving benefits.

You’ll never see the U.S. Congress vote for this, because they’re way too special:

All elected officials and their staff should be subject to the same laws, rules, regulations, and ordinances as their constituents.

If you’re an anti-gunner this is where you should stop reading:

It’s a sad state of affairs when the public has to actually vote on their right to pray in public places. Isn’t that covered by the First Amendment? Just in case it isn’t Texas will make sure you can worship and pray as you see fit:

Texans should be free to express their religious beliefs, including prayer, in public places.

Silly Texans. Didn’t anyone tell you that it’s government, not businesses, that creates jobs and grows the economy?

Common sense laws and regulations. What a novel concept.

There’s a reason why Americans all over the country are flocking to Texas in the hopes of finding the American Dream that has been lost in so many other parts of the Union.