Target Is At It Again: This Time They Are Suing A Man For Saving A Woman’s Life From a Knife-Wielding Killer 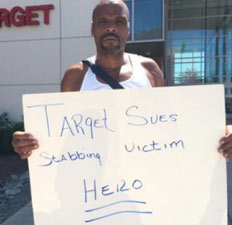 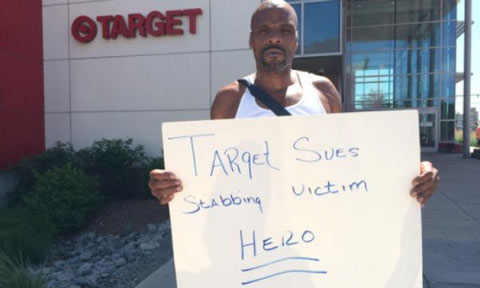 (Target is suing Michael Turner for stopping a knife-wielding murder)

If Target’s latest non-family-friendly bathroom policy hasn’t convinced you of their total lack of common sense, then just keep reading.

In 2013 Michael Turner saw Leon Walls attack and then stab a 16-year old girl. The attack was so violent that Allison Meadows would have been murdered right there at the Target checkout counter had two other men and Turner not stepped in with a baseball bat.

As the surveillance video below shows, after Walls had begun stabbing Meadows, Turner tackled him and then chased him to the front of the store.

A clear case of self defense, right?

You’d think so, but not for Target.

The mega-retailer is now suing Turner and the other two men who stepped in to help the victim of the attack, claiming that it was their actions that led to the stabbing of Meadows:

While Meadows thanks Turner, Target blames him. Court documents say the company claims Turner chased Walls with a baseball bat into the entrance of the store, creating more danger to those inside.

Target filed a counterclaim against Turner, adding him as a defendant to the case. The trial is expected to being on Monday. Meadows and his family will commute to Pennsylvania on Sunday to attend.

Two other men are also being sued by Target, however Turner is the only one without an attorney. Instead, he will be representing himself.

Meadows and her family vehemently disagree with Target’s legal assault on Turner, calling Turner’s actions heroic and crediting them with preventing Meadows’ murder. The Meadows family has sued the store, claiming that the retail company had inadequate security, and alleging that the store, by suing Turner, is just trying to blame someone else for Target’s own refusal to protect the safety and security of its customers.

“Suing Michael Turner is just Target’s way of trying to blame someone else for what happened under their own roof,” an attorney for the Meadows family said, “The family certainly doesn’t blame Mr. Turner and they are thankful he was there that day.”

Is there anyone left at Target corporate offices who has a bit of common sense?

Undercover Video Proves That Men — Not Transgendered People, but MEN — Can Use the Women’s Restroom at Target Now