Switzerland Is Well-Prepared For A Civilization Collapse 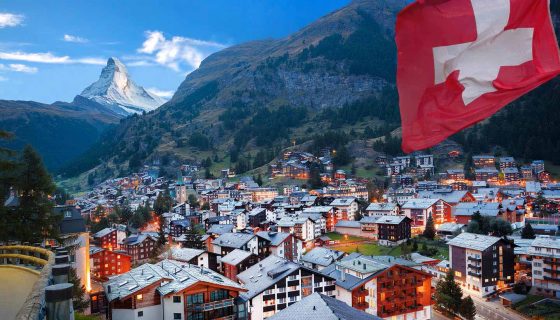 More than perhaps any other nation, Switzerland is prepared for a massive civilization collapse. In fact, if the government itself collapses in Switzerland, most people who live there probably won’t even notice.

A decentralized government (the kind America was supposed to have been founded on) makes it possible for Switzerland to be prepared for a collapse. The mountains and valleys mean that Swiss towns and villages are geographically independent of each other, yet linked in a spider-web of robust connections. But that isn’t all.

The Swiss towns are prepared for water system failures, which would affect the ability to access clean water. According to Marginal Revolution, all around Switzerland, there are thousands of water fountains fed by natural springs. Zurich is famous for its 1200 fountains – some of them quite beautiful and ornate – but it’s the multiple small, simple fountains in every Swiss village that really tell the story. Of course, they look elegant, but if and when central water systems are destroyed these fountains are a decentralized and robust system for providing everyone in the country with clean, pure, drinkable water.

Despite being at peace since 1815, Switzerland is still prepared for a war. Swiss males (and perhaps females in the future) are required to serve in the military (those who cannot pay a special tax) creating a robust reservoir of trained citizens ready to serve in case of an emergency.

As a further example of how ridiculously well prepared the Swiss are for any and all threats, there are things like hidden hydroelectric dams built inside of unmarked mountains so that in the event of mass bombings, they’ll still have electricity from these secret facilities. And, remember, these are the things the Swiss government has let us know about. It is thought that there are probably more fortifications and hidden goodies scattered about the country’s landscape. –Marginal Revolution

Buried deep alongside the hydroelectric dams, shelters, and food stores, the Swiss also have libraries ready to reboot civilization. In one underground bunker, there are detailed instructions on how to build devices for reading all known data storage formats, even older formats like floppy disks. If that knowledge is otherwise lost, future generations can still decode our current and past data storage devices to access the data within correctly. Essentially, the researchers involved in this particular project have attempted to create a “Rosetta Stone” of data formats and are using a ridiculously secure Swiss bunker as the storage point for that knowledge.

Not only do the Swiss have thousands of military bunkers permeating the Swiss mountains, there are also several hundred thousand private and public fallout shelters the largest of which can hold about 20,000 people. Some of the largest installations have been decommissioned and even turned into museums but there is little doubt that they could be rapidly re-purposed in a SHTF scenario. As the Swiss continue to improve their already fantastic railway system it’s standard practice to convert old railway tunnels to security shelters.

Switzerland is famous for being the place to store wealth in times of crisis. That remains true today. The “old-rich” store their gold in heavily guarded Swiss banks, the “nouveau-riche” store their bitcoins in Swiss underground bunkers built to withstand cyber- and nuclear attack. It’s no surprise that Nassim Taleb likes Switzerland because this is a country that has made itself anti-fragile in order to survive the black swans of civilizational collapse.