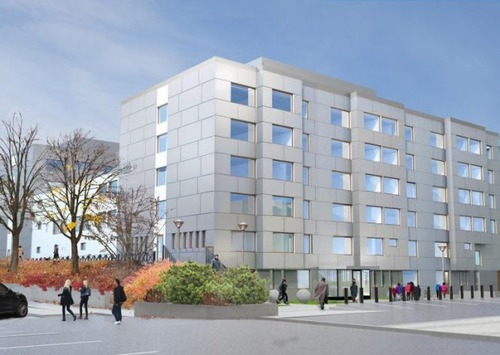 Rinkeby has become one of the most notorious no-go zones in Sweden, if not all of Europe. The tiny urban community, which now has a population that consists almost entirely of 1st and 2nd generation immigrants, has been the site of multiple riots and countless acts of violence in recent years. It’s the place where a 60 minutes crew was attacked, and it was where a riot occurred last month after Trump commented on the dire immigration situation in Sweden. For all intents and purposes, Rinkeby, Sweden isn’t really a part of Sweden anymore.

However, the government still needs a presence in the city. Unfortunately the police station that currently resides in Rinkeby (which was closed in 2014) was designed for a much more peaceful community that no longer exists. That’s why the government has ordered the construction of a new police station with a design that has been compared to that of a fortress or military installation. According to ZeroHedge:

The new police station, which is being built under heavy security and is scheduled to open in 2019, will cost over $40 million construction costs in addition to an annual rental cost of $1.6 million. The security cost for the actual construction is unknown. It is planned that 250 personnel will work there in the community of around 15,000 people. This is a ratio of one cop to 60 residents (for comparison Chicagohas one cop to 270 residents).

The police station will feature bullet proof windows, walls reinforced with sheet metal, and fencing around it, possibly with electrified barbed wire. So it will look more like a military installation than anything. Also it will be designated as “specially protected,” which means a year in prison for anyone even throwing a stone at it.

So far the government has struggled to find contractors who are willing to build the facility. They’re all too afraid to enter Rinkeby. It would also be a real struggle to find cops who are willing to work at the station. The police are afraid to drive their personal vehicles there for fear that they would be vandalized, and public transportation is too dangerous for the officers. It’s been suggested that in addition to the cost of building the police station, the government may need to provide separate transportation for the police. And it should go without saying, no police officer could safely live in Rinkeby.

The construction of this facility provides the best evidence for why Europe’s immigration policies, as well multiculturalism in general, aren’t working. More importantly, it shows why these policies are unsustainable from a purely financial perspective. Immigrants who refuse to assimilate create a massive drain on public coffers. Not only are they a drain on Sweden’s welfare state, but Sweden has to spend millions of dollars hiring extra cops and building massive fortresses to protect the rest of their citizens.

Perhaps that’s why the people of Sweden are finally waking up to the reality of their situation.

The eurosceptic, anti-mass immigration Sweden Democrats have surged to first place in the polls, as the Swedish voting public apparently become increasingly concerned by the growth of ethnic ghettoisation, rising crime rates and Islamic radicalisation.

According to the latest YouGov poll to come out of the Scandinavian country, the party could expect to secure almost a quarter of the vote if elections were held tomorrow – almost double its level of support in 2014 – making it the single largest political force in the country.

It appears that in the next election, the politically correct leftists that ran this country into the ground are in for a rude awakening by a population that can finally see through their lies and wishful thinking. The event can’t arrive too soon. If Sweden had waited much longer to push back against these globalists and their insane immigration policies, I don’t think Sweden would have survived.