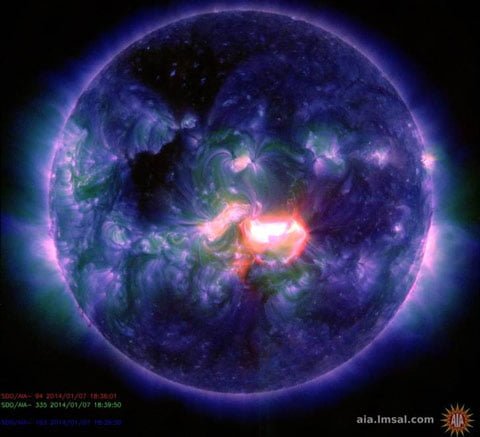 This morning The Daily Sheeple reported that the biggest sun spot in recent history had been identified on the sun and that it had moved into position facing earth. The spot is so large that the National Oceanic and Atmospheric Administration says it could swallow three earths. 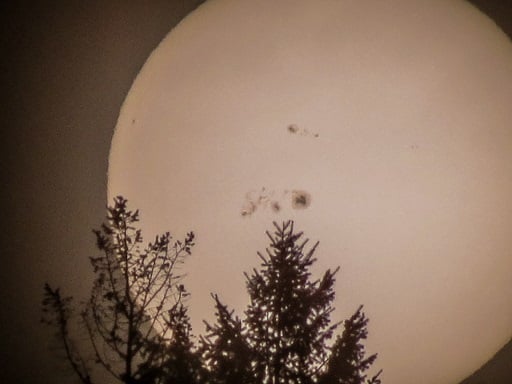 (Photo by Rocky Raybell : Sun spot AR1944 is so big it can be seen with amateur telescopes)

The spot was mostly quiet for the last few days and wasn’t directly facing earth, though a smaller Coronal Mass Ejection (CME) glanced the planet in the early hours of January 7th.

Massive sunspot AR1944 has erupted. The X1 flare has sent a coronal mass ejection into space, and it’s heading towards Earth.

NOAA has upped the risk from further X-class flares to 50% for the next 24 hours. Risk of M-class up to 80%

The NASA-ESA Heliophysics Fleet is monitoring the sunspot and CME. Depending on its speed it could take anywhere from a day to three days to hit earth. NBC News reports that the flare is already responsible for radio traffic disruptions.

(Pictured: NASA’s Solar Dynamics Observatory shows a blast of activity originating from the center of the sun’s disk on Tuesday)

Though an X-1 Class flare is not going to cause widespread power outages across earth, the possibility of increased activity on the sun has been noted by NASA and other researchers, as the sunspot destabilizes further.

The rapid formation of sunspot AR1944 and the earth-facing ejections highlight how quickly life on earth could change if the right conditions are met.

In the summer of 2012 a massive solar flare was ejected by the sun and narrowly missed earth.

Had it occurred just a week prior, the highly charged particles would have struck earth and, according to CU-Boulder Professor Daniel Baker, would have led to nothing short of a technological disaster across the globe.

The CME itself was massive… and its speed was unprecedented, clocking in at 7 million miles per hour.

While typical coronal mass ejections from the sun take two or three days to reach Earth, the 2012 event traveled from the sun’s surface to Earth in just 18 hours.

“The speed of this event was as fast or faster than anything that has been seen in the modern space age,” said Baker.

But that flare wasn’t a once-in-a-million-years event.

A decade ago in 2003 NASA identified the most powerful flare in recorded observational history:

In 2003 a solar flare emitted by the sun was the most powerful in recorded observational history, measuring in at levels so high that had it hit earth it would have likely disabled everything from the internet and mobile phones, to water utility plants and the whole of the U.S. electricity infrastructure.

That event was originally thought to have been an X-28 class flare, more powerful than necessary to take out modern electronics across earth. It was later revised to a “whopping” x-45.

These events occur quite regularly in the grand scheme. Recent observations suggest at least several occurrences in a lifetime. For the last hundred years since electronics made their way into our society we’ve been lucky, having experienced just minor disturbances.

But as the last decade shows, it can happen at any time and the after-effects would be catastrophic.

This is what prompted Senior Member of the House Homeland Security Committee Congresswoman Yvette Clarke to warn that the likelihood of a severe geo-magnetic event capable of crippling our electric grid is 100%.

Despite the various earthbound threats that exist, a solar flare is arguably the most probable threat we face as a civilization.

As Congressman Roscoe Bartlett has noted in the documentary Urban Danger, if an event of this magnitude hit earth we’d revert back to the stone age overnight:

So how does one survive such an event, where pretty much everything we have come to expect in our just-in-time modern society comes to a screeching halt within seconds of the disaster striking?

It won’t be easy, but it is certainly survivable, and if you’ve developed a broad preparedness plan you would fair much better then the 90% of people who studies say wouldn’t make it in such a scenario.

Imagine for just a moment what would be going through your mind and the minds of those with whom you share this report if sunspot AR1944 had emitted an X-25+ Class solar flare that was heading for earth right now and that it would be here within 48 hours.

Would you be prepared for what happens when the national power grid collapses? Would you be ready for the catastrophe that would follow within a matter of hours?

Preparedness for such an event starts with a simple grid-down supply. Once those basics are covered and you have enough to keep your family afloat for two weeks, you could broaden your preparedness horizons with long-term food storage, emergency medical supplies, gold and silver as bartering currencies, and self defense strategies to protect against the inevitable hordes that would follow.

The threat is real. Countless officials and experts have warned of the possibility in our lifetimes.

What if tomorrow was the day?

Hattip: Follow Chris Carrington at The Daily Sheeple for updates on space weather, natural disasters and other global happenings.