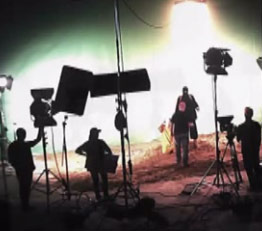 In a rather stunning note, CyberBerkut, a Ukrainian group of hackers, claims to have hacked John McCain’s laptop while he was in the Ukraine, and as Techworm reports, what they have released from his June visit appears to be a fully staged production of an ISIS execution video…

As Techworm reports, according to the hackers, they broke into the laptop of one of the American politicians, Senator McCain and after found a video with staged IS execution, which they decided to show to the world community.

It so happened that Senator John McCain had visited Ukraine on a official visit somewhere in the first week of June 2015. The hacktivists belonging to CyberBerkut somehow managed to access his laptop.

Here is what CyberBerkut said to John McCain…

“We CyberBerkut received at the disposal of the file whose value can not be overstated!

Dear Senator McCain! We recommend you next time in foreign travel, and especially on the territory of Ukraine, not to take confidential documents. In one of the devices of your colleagues, we found a lot of interesting things. Something we decided to put:this video should become the property of the international community!”

The video they released is below..

From the video it can be seen that the entire set including the hostage is stage managed.  An actor dressed as an executioner of IS is holding a knife to behead the prisoner, and the “victim” depicts to be suffering.

It may be recalled that IS have been repeatedly publishing the videos of the executions of hostages and if this video is true, the victims may in fact be alive.

The authenticity of this video has not been independently verified.

Metabunk.org has attempted to debunk the hacker’s claims…

The video shows a very brightly lit stage with simulated desert floor and a greenish backdrop. A film crew and multiple lights surround the stage, but they are strongly backlit. The video has no audio, and is very low resolution so no details can be made out. The kneeling man wears a head cover, to suggest that the head could be replaced by a computer generated image, or separately recorded video.

The video appears to be an attempt to replicate one of the “Jihadi John” beheading videos of 2014. In particular it appears to be an attempt to replicate the video of James Foley. None of those videos show actual beheadings, and instead show Jihadi John sawing at the neck with no apparent blood, and then they cut to a shot of a decapitated head posed on top of a body. This led to speculation that the videos were faked.

However we can tell it is not a video of the faking of any of the Jihadi John videos for a number of reasons.

While it is easy to point the finger at the pro-Russian hacker collective (and consider their motives in damaging US – especially McCain – influence) and deny the video’s truth, one can’t help but wonder – given just how well produced the final videos were in many cases, just who is behind the scenes of the widely known to be funded by US sources ISIS… just another conspiracy theory?