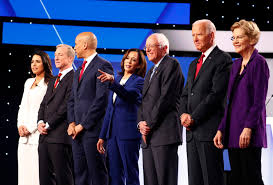 Democrats seem to have two plans to “fix” the United States.  Raise taxes and give everyone “free” healthcare. But their propositions could cost the U.S. economy 413,000 jobs according to a new study.

Former vice president Joe Biden, Senator Elizabeth Warren (D., Mass.), and other 2020 Democratic hopefuls have pledged to reverse President Donald Trump’s 2017 tax cuts and hike corporate tax rates to as high as 35 percent to fund expensive government programs.  However, this could be disastrous in an already manipulated economy that’s barely hanging on. Such policies always discourage corporate investment, thereby limiting growth in wages, employment, and productivity, according to an analysis from the Tax Foundation, as reported by The Washington Free Beacon.

Taxation has been problematic for democrats, as history has shown that in all forms, taxation, which is theft, is a drain on the economy.  The media has largely helped create this problem for democrats be declaring the economy under President Donald Trump to be the best ever. Surface numbers would have the public in agreement, however just looking below the surface of the government’s numbers, we already see problems.  The Democrats won’t be able to fix them either, they will only expand them according to the new analysis done by Erica York, an economist.

Biden’s corporate tax plan will cut the GDP by 1 percent and shave off 187,000 jobs from the U.S. economy. Meanwhile, the tax plan backed by Warren, Sanders, and Buttigieg would leave 413,000 people without work.

The Tax Foundation analysis studies the negative economic effect of corporate tax hikes in isolation from how the additional government spending fueled by the higher tax revenue may affect the economy. York said that returning to pre-2017 tax levels will restore corporate tax burdens to exceptionally high levels compared with other advanced industrial countries. –The Washington Free Beacon

“When we had a 35 percent rate, we were an outlier amongst most of our competitors,” she said. “We had one of the highest corporate tax rates in the industrialized world. Lowering it made us more competitive, raising it back up would be a step in the wrong direction.”

Democratic hopefuls and their lapdog mainstream media have characterized the 2017 tax reform as a handout to the rich, despite the fact that four in five American taxpayers have received smaller tax bills since it passed. Warren has gone even further and called for an additional 7 percent tax on every dollar of profit above $100 million. A higher corporate tax rate makes corporations less likely to invest in a workforce, and in order to keep profits, it will likely result in layoffs.

The book How to Be a Successful Tyrant (The Megalomaniac Manifesto) by Larken Rose, explains many reasons why tyrants need heavy taxation in order to keep a hold of power.

Larken Rose catapulted above the rest by challenging the federal government to refute his reading of the tax code and answer his questions before he would give them another dime. In 2002, he produced a video explaining his research and conclusions. The video sold briskly for several years until the government railroaded the 37-year-old upstart into federal prison. His Conclusions were never refuted.  Before going to prison, Rose lived with his wife Tessa and daughter Elyssa in a modest home in Pennsylvania, where they counted the days until he returns.

Taxation is the tool of all tyrants and Rose explains it perfectly in his book.