One glance at this chart explains why the status quo is locked on “run to fail” and will implode in a spectacular collapse of the unsustainable debt super-nova.

For those who suspect the status quo is unsustainable but aren’t quite sure why I’ve prepared a simple chart that explains the financial precariousness many sense. The chart depicts the two core elements of a debt-based, consumerist economy: disposable earnings, defined as the earnings left after paying for essentials which can then be used to service debt and debt.

In other words, if all the household earnings are spent on non-discretionary expenses (rent or mortgage, taxes, food, utilities, healthcare, etc.) then there is no money left to pay the interest and principal on a loan. Lenders consider this household uncreditworthy for the simple reason that their earnings cannot support the monthly nut of debt service (interest and principal).

Note the word earnings as opposed to income. Social entitlements such as Social Security are income but they are funded by taxes paid by those with earnings. (All of America’s social entitlements are pay as you go–the trust funds are PR fiction.) The investment income (interest) paid to owners of Treasury bonds is also paid by taxes on earnings.

The problem with servicing debt out of income is two-fold: one, earnings of the bottom 95% have been stagnant for decades, which means earnings aren’t actually rising in terms of the goods and services they can buy, and two, the cost of non-discretionary expenses (essentials) has been rising, especially the big-ticket costs such as housing, healthcare and higher education.

You see the problem: since earnings are flat and the cost of essentials is steadily rising, there are fewer disposable earnings left every month to service debt. This is a problem in an economy like America’s that depends on debt-funded consumption to fuel “growth.” No increase in debt means no increase in consumption which means no “growth.”

In response, the status quo–the Federal Reserve and the federal government–have played two financial tricks to maintain the illusion that earnings can support more debt: one, the Fed has lowered interest rates to near-zero, reducing the costs of mortgages (but not the sky-high interest rates charged on student loans or credit cards, of course) so the same stagnant earnings can support a much larger mortgage, and two, the federal government has increased its own borrowing to fund various stimulus programs, most of which are corporate welfare to monopolies and cartels in the form of subsidies, tax breaks, government contracts, etc. But as the consumerist economy weakens, the government is increasing its stimulus to households as well–all with borrowed money that is theoretically serviced by taxes on earnings.

Alas, these tricks are not sustainable. Interest rates can’t go lower than zero without bankrupting the banking sector, and federal spending is completely untethered from tax revenues.

The “solution” is obvious: borrow the money needed to service new and existing debt. This is the definition of a zombie economy comprised of zombie companies and zombie consumers that need to borrow more to sustain the illusion of solvency, i.e. that their disposable earnings are sufficient to service all their debts.

Notice that the debt-disposable pyramid is inverted: an ever-larger amount of debt is being piled on an ever-shrinking amount of disposable earnings. The trick of borrowing more to make the payments on the existing debt and fund new consumption results in a compounding of debt, not an arithmetic (linear) increase in debt: debt grows geometrically while the disposable earnings needed to service the debt remain stagnant.

The only “solution” left is Stimulus Addiction Disorder (SAD): the Fed must create trillions of dollars out of thin air to buy the Treasury bonds that are sold to fund trillions of dollars in stimulus–not once or twice, but from now on until the entire travesty of a mockery of a sham collapses under its own weight of flimflammery and fraud.

Artifice, illusion and simulacra are not real, and what’s not real vanishes back into the air whence it came. One glance at this chart explains why the status quo is locked on run to fail and will implode in a spectacular collapse of the unsustainable debt super-nova. SAD, to be sure. 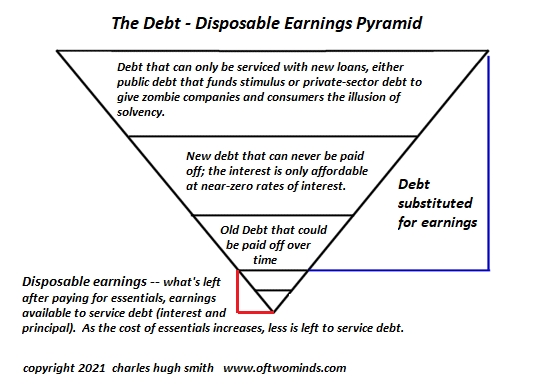