Steel Industry In The US: Falling Stock Prices & Layoffs 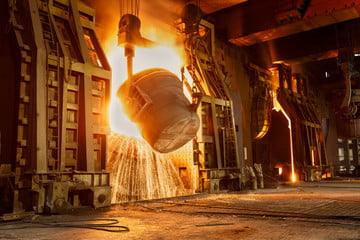 Donald Trump’s trade war and the nasty tariffs that have come along with it are causing the American steel industry to go belly up.  More layoffs and falling stock prices are only the beginning for an industry that was once the backbone of the American economy.

A Michigan steel plant has announced it will close at the end of the year, while United States Steel stocks are down 75 percent since Trump’s tariffs were announced.  Trump’s intention may have been to “resurrect” American steel, but it’s become too obvious that that isn’t happening, and his trade war is devastating the entire industry.

This week’s bad news comes from Rothbury, Michigan, where the Barber Steel Foundry will close at the end of the year, leaving 61 people unemployed. A spokesman for the company, which is owned by the Pennsylvania-based Wabtec Corporation, told Michigan Live that the closure is due to “declining business conditions.” –Reason

The news from American steel continues to worsen. In July, NLMK Pennsylvania, a subsidiary of a Russian-owned steel company, announced that it would layoff 80 workers amid slowing production. Plant president Bob Miller said the plant’s inability to win exemptions from tariffs were to blame for the lost jobs

In 2002, President Bush Imposed 30% Steel Tariffs; This Is What Happened Next

The worst part, however, is that Donald Trump appears to be oblivious to his destruction of American steel.

If this problem of layoffs and falling stocks was limited to just a few plants within the U.S., it might be easily explained away as simply business is slowing down.  But that isn’t the case.  Steel is in a particulary bad predicament right now.

Domestic steel prices spiked in the months after Trump imposed his tariffs on imported steel. The higher prices (and larger issues, including the uncertainty created by Trump’s trade war) lessened demand for steel and prices have now fallen below pre-tariff levels. Lower prices have translated into less revenue for steelmakers, and the jolt once provided by the tariffs is now gone. The three biggest U.S. steelmakers—Nucor, Steel Dynamics, and U.S. Steel—are all expected to fall short of their third quarter projections.

In a warning to shareholders issued last week, the Pittsburgh-based company said it expects to lose 35 cents per share during the third quarter, after previously projecting losses of just 6 cents per share. Since the steel tariffs took effect in March 2018, U.S. Steel’s stock has fallen by a whopping 75 percent—from a high of $45 in the days after the steel tariffs were announced to a value of just $10.50 per share on Tuesday morning. Nucor stock is down about 25 percent since March 2018, while Steel Dynamics has seen a 30 percent drop. –Reason

“Tariffs are a really ineffective tool to revitalize a domestic industry,” said Clark Packard, a trade policy expert with the R Street Institute, in June.

It’s delusional to believe that the tariffs are somehow good for American businesses and the economy as a whole.  It’s been proven otherwise. Steel will continue to suffer under the weight of the government.