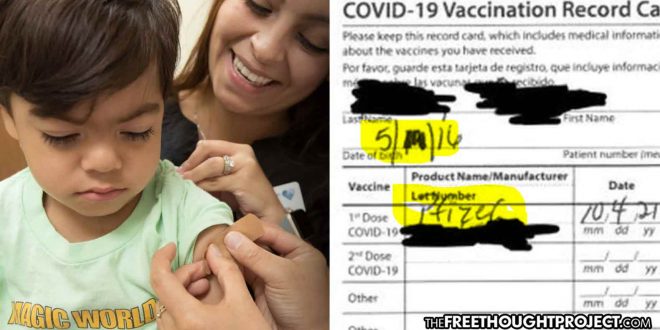 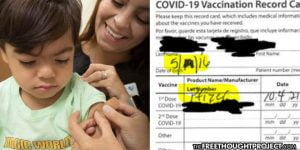 That didn’t take long. We knew it was going to happen. Several states have ordered millions of doses of “vaccines” for children as the Food and Drug Administration is expected to give the go-ahead for emergency use authorization of the Pfizer shot.

Once the Centers for Disease Control and Prevention falls in line and recommends the shot, parents will undoubtedly line up to have their kids injected with this stuff. “Some 28 million young Americans would become eligible for protection from Covid-19 should the FDA authorize and CDC recommends the vaccine for children ages five through 11,” Zients said.

The adviser’s comments come less than 24 hours after an FDA advisory panel voted overwhelmingly in favor of authorizing the Pfizer-BioNTech vaccine for children aged between five and 11. Though the panel’s determination is not binding, the regulator tends to follow its recommendations, and approval for the younger age group is expected sometime in the next week.

It won’t be long until kids can get shot up with Moderna’s concoction as well. That Big Pharma company recently announced that the initial trial results for its vaccine in kids aged six to 11 determined the jab was “generally well tolerated” and produced a “robust neutralizing antibody response.” Though the company has completed recruitment for participants in its trial for those aged between six and 12, it says it is continuing research for even younger recipients, including those just “six months to under six years of age.”

Even though children don’t get the cold or the flu as harshly as adults, and the FDA previously noted that there is an increased chance for certain negative side effects in younger age groups, they still have to get the shot. The main side effect that is worrisome is death, namely from a form of heart inflammation known as myocarditis. And yet the FDA still somehow came to the conclusion earlier this month that “the overall benefits of the vaccine may still outweigh the risks.”

They have moved on to the children. This is going into a very ugly phase of totalitarian enslavement. Stay alert and prepared. This vaccine coupled with the new delta plus scariant they recently made up could make for the “dark winter” we were warned of.