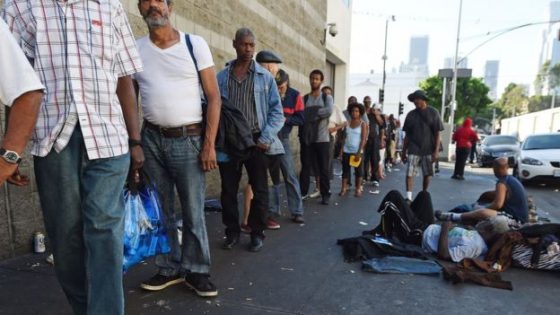 The number of homeless people in Los Angeles is skyrocketing. In just one year, the figures revealed that the homeless population in the city grew 20% while the numbers for the wider Los Angeles County were even higher at 23%.

As if looking at those numbers isn’t cringeworthy enough, The Los Angeles Homeless Services Authority reported Wednesday that 6,000 homeless young people were tallied across the county in January, a 61% increase over the 2016 total. Most of the young people are ages 18 to 24. All the youth shelters have waiting lists and affordable housing is tough to find, even with a rent voucher, according to Heidi Calmus of Covenant House California, an international youth homeless services agency with a branch in Hollywood. “The system is overwhelmed,” Calmus said Tuesday night as she and a colleague, Nick Semensky, delivered toiletry bags and sandwiches to young people living in the streets.

Despite efforts to combat the problem, the number of homeless continue to go up. In 2015 authorities declared a public emergency as the numbers sleeping on the streets soared. City officials committed $100 million to tackle the problem. It’s safe to say that whatever is being done right now is not working.

Los Angeles County Supervisor Janice Hahn described the figures as “staggering.” “Homelessness in LA County has grown at a shocking rate,” she said in a statement. “Even as work is being done to get thousands of people off the street and into housing, more and more people are becoming homeless. It is clear that if we are going to end the homeless crisis, we need to stem the overwhelming tide of people falling into homelessness.”

But it isn’t that easy. Experts are placing the blame on soaring rents and a high cost of living as the two major factors. According to Expatistan.com, a 900 square foot furnished apartment will cost over $2400 per month.

Los Angeles Mayor Eric Garcetti said there was “no sugarcoating the bad news”. “It’s impossible to wrap your head around the numbers,” he told reporters, adding that soaring rents and the city’s high cost of living were partly to blame. “We can’t let rents double every year,” he told reporters. Average rents in Los Angeles County have increased by 32% since 2000 while average household incomes for people renting have fallen by 3% when adjusted for inflation, according to the California Housing Partnership.

Mayor Garcetti is correct in that you cannot sugarcoat these numbers. In its latest report, the LAHSA said there were 57,794 people homeless in the county during its survey in January, compared to 46,874 in 2016. In the city there were 34,189 with no permanent roof over their heads, the report said, compared to 28,464 the year before.

The solution, according to the politicians in Los Angeles, is of course, to throw money at the problem. The county needs to build more than 550,000 affordable rental homes for low-income households, the LAHSA says. Los Angeles recently approved new measures to raise $1.2 billion in bonds to build 10,000 new units of housing for homeless people. There are also plans to raise about $3.5billion over 10 years to pay for other homelessness projects.

When the number of homeless increases this dramatically, it’s easy to see that the nation is in a bit of an economic bind.  It’s getting harder and harder to get by, and any sort of financial issue, no matter how small, could easily cause homelessness for those living paycheck to paycheck.