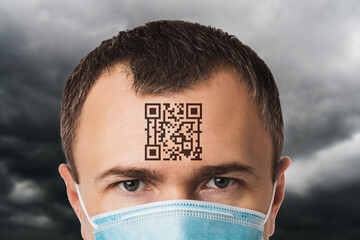 Sri Lanka has introduced a QR code that must be scanned in order to purchase fuel. As the economy collapses and people riot against the ruling class, the clamps tighten and fuel is being rationed.

Last week, the Minister of Power and Energy in the economic wasteland that is Sri Lanka, introduced the “National Fuel Pass.” This a fuel rationing scheme complete with a QR code amid the raging economic crisis and shortage of fuel in the island country.

Those vaccine passports didn’t set you free they gave your government absolute control.

According to minister Kanchana Wijesekera, the new pass will guarantee the allocation of fuel quota on weekly basis. A QR code will be given for each National Identity Card number (NIC), once the vehicle identification number and other details are verified. As NDTV reports, people with registered vehicles will get their turns based on the last digit of their registration number. Tourists and foreigners will be given priority to take fuel in Colombo. -ZeroHedge

“Introduction to the National Fuel Pass will be held at 12.30 pm. A guaranteed weekly fuel quota will be allocated. 1 Vehicle per 1 NIC, QR code allocated once Vehicle Chassis number & details verified. 2 days of the week according to Last Digit of number plate for fueling with QR,” Wijesekara said in an earlier tweet.

Introduction to the National Fuel Pass will be held @ 12.30pm. A guaranteed weekly fuel quota will be allocated. 1 Vehicle per 1 NIC, QR code allocated once Vehicle Chassis number & details verified. 2 days of the week according to Last Digit of number plate for fueling with QR. https://t.co/hLMI9Nm5ZF

The slave system is tightening down as Sri Lankans wake up to who the real problem is: governments and central banks. But the ruling class won’t give up easily, even after the president recently fled the country in broad daylight to save his life as his slaves rose up against their oppression. The country has been reeling under a major economic crisis that has created acute shortages of food, fuel, and medical supplies, and left the country teetering on the edge of economic ruin.

Sri Lanka has now also further enslaved the people by entering into discussions with the International Monetary Fund (IMF) over an emergency bailout. The United Nations mission in Sri Lanka has urged senior politicians to ensure a peaceful transfer of power in line with the national Constitution, following weeks of protests that finally saw the resignation of President Gotabaya Rajapaksa on Thursday.

“The United Nations in Sri Lanka urges all stakeholders to ensure a peaceful transition of power in full respect for the Constitution,” said United Nations (UN) Resident Coordinator Hanaa Singer, in a statement issued on Friday on behalf of the UN in Sri Lanka.

She said it was “imperative that the transition of power is accompanied by broad and inclusive consultation within and outside Parliament. –ZeroHedge

The interim president has already cracked down on the slaves harshly trying to quell an uprising that seems to have gained steam. Are people finally tired of being owned and ruled?