In May of 2009 North Korea’s controversial nuclear weapons tests were dismissed by global intelligence agencies as failures due to their low explosive yield. But EMPact America President Dr. Peter Vincent Pry, a former CIA nuclear weapons analyst, had his own assessment. It appears, according to Pry, that while the yield from the nuclear tests was weak with respect to destructive power in terms of the nuclear blast itself, the tests indicated the weapon was “capable of emitting enough gamma rays to disable the electric power grid across most of the lower 48 states.”

It’s been referred to as a “Super-EMP,” or electro-magnetic pulse weapon, something that foreign powers and rogue states have been working on developing for years as a low-cost, low-inventory counter strategy to America’s massive nuclear weapons stockpiles.

Some analysts now believe that North Korea may have not only built such a weapon, but this week they may have very well tested a delivery device that would make it possible for them to launch a pre-emptive strike against the United States. Such an attack could destroy electronic components in everything from cell phones and cars to water utility plants and gas stations from coast-to-coast within seconds, throwing the country’s infrastructure back to the 1800’s.

Analysts in the West aren’t really sure what exactly North Korea has launched into space. There are mixed reports, with some suggesting the satellite hovering 300 miles above earth is working properly, while in the US it was widely believed that the satellite was hurtling out of control.

No sooner had major American television networks spread the word from their official sources that the satellite was “out of control” than South Korea’s defense ministry came out with just the opposite view.

Ministry spokesman Kim Min-seok, briefing South Korean reporters, told them that, “for the time being,” the satellite is “working normally.”

What we do know, is that we don’t know anything about what exactly it is that’s hovering up there, leaving some to speculate it could be a first generation test of a Super-EMP weapon that could be launched at the U.S. directly from space:

North Korea is not assessed to be able to miniaturize a nuclear weapon to fit on a long-range rocket – at least not yet – even though it has an active nuclear weapons development program.

The concern over North Korea’s potential to develop the capability to launch an EMP attack is due to the country’s instability and isolation and the defiance it has shown – even to  close friends China and Russia. Beijing and Moscow have been unable to influence the behavior of North Korea’s leaders.

While the North Koreans said that the launch was to put a satellite into orbit, Western experts agree that the same technological know-how provides the capability to send a warhead as far as the United States.

With the knowledge of orbiting capability, experts say, such a power projection could could give North Korea the ability to reach even beyond California. An orbiting warhead could be placed anywhere and released on command to de-orbit and hit any location within the U.S.

Or, North Korea could explode an orbiting warhead in the atmosphere some 150 miles above a target, creating an electromagnetic pulse that could knock out the highly vulnerable grid system of the U.S.

Experts agree that such an EMP exploding high above Kansas, for example, would knock out a majority of America’s national grid system.

This scenario, which isn’t too far-fetched given the latest technical demonstration, recently was depicted in the popular movie “Red Dawn,” in which the North Koreans use an EMP to knock out the U.S. electrical grid system in the Northwest.

While it is unlikely that the North Koreans would deploy such a weapon over the United States, because doing so would mean an almost immediate nuclear retaliation from EMP-hardened assets within the US military and the subsequent destruction of pretty much their entire country, anything is possible.

The North Koreans have just tested a combination of a three-stage ballistic missile capable of hitting the western United States, while also likely experimenting with Star Wars weapons systems that are able to strike from space within minutes once a launch is ordered.

It would only take one unstable dictator to change the course of the planet forever, and given how little we know about Kim Jong Un (we’re not even sure how old he is), there is always a possibility of such an outlier becoming reality.

It has been suggested that a major war in some form or fashion, be it limited in scope or all out thermo-nuclear warfare, could be a real possibility in the next decade. Given the destabilization of the middle east, the fight over global resources, the inherent disagreements that exist between east and west, and a globalist agenda that is bent on centralizing power into a single world government, could it be a plausible scenario that China and Russia nudge North Korea’s young leader into starting the next World War by deploying an EMP or nuclear weapon from space?

Of course, Kim Jong Un was just elected by millions of Time magazine readers as 2012’s Person of the Year, and such a man would never consider starting a global war.

Then again, this guy was bestowed a similar honor in 1938… 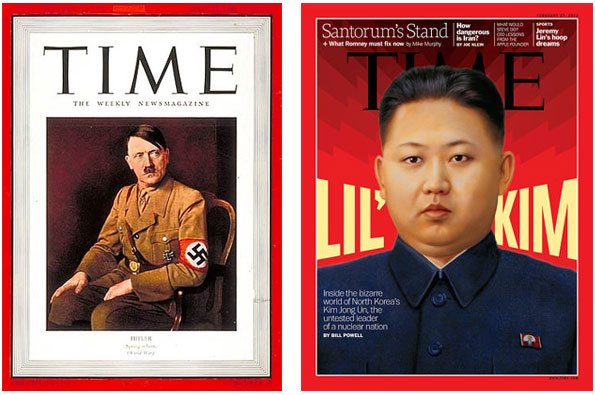